Raj Thackeray unveiled the new flag, which in the centre bears a 'rajmudra' (royal seal used during the times of warrior King Shivaji), at the MNS's plenary meeting in suburban Goregaon.

Thackeray unveiled the new flag, which in the centre bears a 'rajmudra' (royal seal used during the times of warrior King Shivaji), at the party's plenary meeting in suburban Goregaon.

The party's earlier flag had saffron, blue and green colours.

Before unveiling the flag, the MNS chief paid tributes to his uncle and late Shiv Sena founder Bal Thackeray on the latter's 94th birth anniversary on Thursday.

He also inducted his son, Amit Thackeray, into the party.

Amit's name was announced by a senior leader Bala Nandgaonkar and greeted with a standing ovation by the 20,000-plus gathering at the NSE Ground, Goregaon. 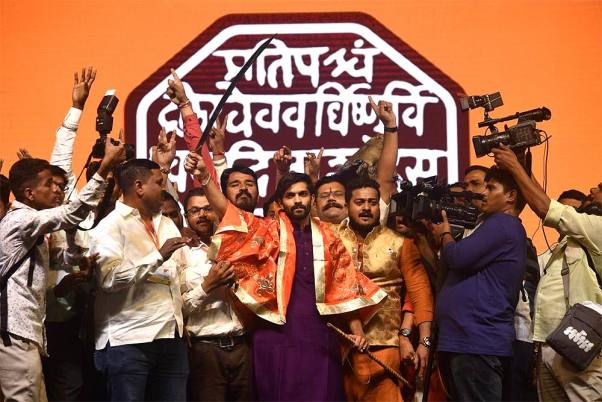 "This is my first-ever address on a public platform in the past 14 years of the party and my 27 years (age)... I am truly overwhelmed. This would not have been possible without the guidance and encouragement of Raj-Saheb Thackeray," Amit said in his brief speech.

During the inaugural session of the MNS plenary meet, he also paid respects to Hindutva ideologue V D Savarkar besides Chhatrapati Shivaji Maharaj, B R Ambedkar and his grandfather Prabhodhankar Thackeray.

The MNS was set up in 2006 after Raj Thackeray split from the Shiv Sena.