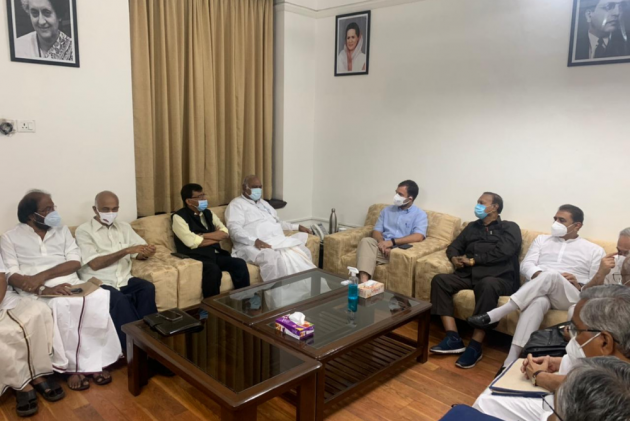 Following a key strategy meet between 14 Opposition parties led by Congress to discuss the best ways to counter the government on the Pegasus snooping issue, Congress leader Rahul Gandhi on Wednesday accused the Narendra Modi-led government of planting a "weapon" in our phone.

Adding that the voices of the Opposition were being "curtailed", Gandhi asked the government to respond to the question of whether or not it bought Pegasus.

Amid furore regarding the Pegasus snooping list and the possible involvement of the government of India in spying on citizens using the Israeli spyware, Opposition parties met on Wednesday to discuss ways to use the issue to corner the Narendra Modi-led government.

"Pegasus row for us is an issue of nationalism, treason; this is not a matter of privacy. It is anti-national work," Gandhi said.

"We are not disturbing Parliament, we are only fulfilling our responsibility," Gandhi said, adding, "Narendra Modi, Amit Shah have hit the soul of India's democracy by using Pegasus against India, its institutions".

Accusing the government of "curtailing" the voices of Opposition leaders, Gandhi said, "We are all here... only asking if the Pegasus software was bought and if it was used against certain persons in India," he added.

Gandhi's was one of the names whose phone numbers were allegedly part of the Pegasus snooping list. Responding to the government wanting no discussion on the matter, Gandhi said, "Why shouldn't we have a discussion on the floor of the House? Narendra Modi has put a weapon (and is) snooping on our phones," NDTV reported Gandhi as saying.

Gandhi's comments came after the meeting which saw 14 Opposition parties come together. The purpose of the meeting was to develop a strategy to attack the Centre regarding the Pegasus snooping list database which included the phone numbers of nearly 300 Indians.

The meeting was chaired by Mallikarjun Kharge and was attended by opposition leaders from both Lok Sabha and Rajya Sabha including Congress' Rahul Gandhi.

Gandhi had attended a similar meeting of Opposition leaders of Lok Sabha on Tuesday evening.

"Rahul Gandhi and other opposition leaders will submit similar adjournment motions on the Pegasus issue in the Lok Sabha," a senior leader said after the meeting.

Gandhi later told reporters that they will continue to raise issues of public interest and will not compromise on the issues of Pegasus, price rise and farmers.

Earlier during the meeting with like-minded parties, Gandhi said the government was trying to defame the opposition by accusing them of not allowing Parliament to run, sources said.

Gandhi said the opposition was only raising issues concerning the people, farmers and security and will continue to do so, they said.

Opposition unity and better coordination and synergy among opposition parties was stressed at the meeting, the sources said.

Revealed by a consortium of media houses worldwide a day before the commencement of the Monsoon Session of Parliament, the Pegasus issue has caused widespread outrage with the Opposition using it as an issue to corner the government in both the houses. Repeated disruptions by the Opposition have marked the Parliament sessions with several parties seeking a court-monitored judicial probe into the matter.

Earlier in the month, an international media consortium had reported that over 300 verified Indian mobile phone numbers, including of two ministers, over 40 journalists, three opposition leaders besides scores of businesspersons and activists in India, could have been targeted for hacking through the Pegasus spyware of the Israeli firm NSO.

Defending the government in parliament earlier last week over the Pegasus issue,  IT MinisterAshwani Vaishnaw had said there was "no substance" behind the sensational claims. “A highly sensational story was published by a web portal last night. Many over-the-top allegations made around this story. The press reports appeared a day before the monsoon session of Parliament. This can’t be a coincidence…In the past, similar claims were made regarding the use of Pegasus on WhatsApp. Those reports had no factual basis and were denied by all parties. Press reports of 18 July 2021 also appear to be an attempt to malign Indian democracy and its well-established institutions.” he said.