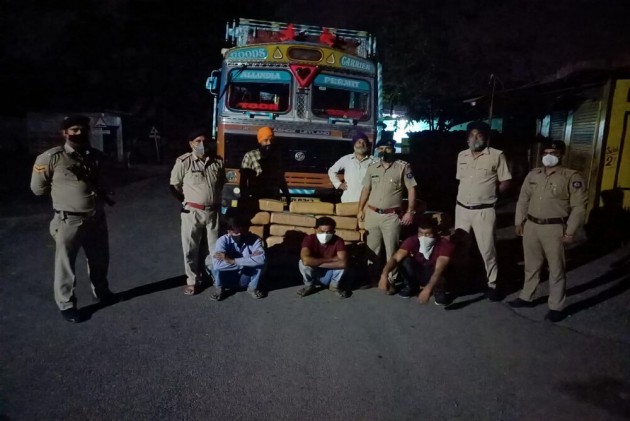 Himachal Pradesh Police on Monday seized 303 kilograms of ganja (cannabis) worth Rs 3 crore from a truck arriving from Agartala.

Police said three persons including the truck driver were arrested.

According to Atul Fulzele, inspector general of police (CID), Shimla, the arrested trio hails from Paonta Sahib in Sirmaur district.

India Scored A Self-Goal With Its E-Cigarette Ban

What makes the arrests significant is that this is the largest action undertaken by the state police against the inter-state drug mafia and it occurred on World No Tobacco Day, said Khushal Sharma, Superintendent of Police (Sirmaur).

According to the police, the drugs were concealed in 31 packets, which were hidden in a truck carrying the number plate-- HP 17E 8213. The truck entered Himachal from Uttarakhand via Puruwala (Sirmaur) around 2.40 am on Monday, officials said adding that the police had set up a check post in the area based on intelligence reports.

Sharma said the police is carrying out an investigation to trace the source of the drugs.

According to him, the gang behind the supply of this consignment is most likely to be supplying drugs to mafias in Punjab, Delhi, UP, Uttarakhand, Himachal, Jammu and Kashmir and Haryana.

According to Sharma, the inter-state drug mafias are taking advantage of various state governments lifting restrictions on movement of trucks transporting essential goods.

This is the third major drug seizure by the Paonta Sahib police in the last year. Earlier, 1,300 kg poppy husk was seized in two different instances by the Puruwala police.

Further, the Himachal Pradesh Police has registered 2,126 cases under the Narcotic Drugs and Psychotropic Substances Act and arrested 2,909 persons since January 1, 2020.

To reduce supply of contrabands, illicit cultivation of 12,52,455 cannabis plants in 7,917 bighas and 2,66,353 poppy plants in 52 bighas were detected by a massive integrated intelligence operation and destroyed during the same period.

“During the recent Covid-induced lockdown, police succeeded in identifying 66 bighas of land, where illicit cultivation of 15 lakh poppy plants were being undertaken at Padhar Mandi district,” said director general of police Sanjay Kundu .

Since January 2020, Himachal Pradesh Police have also attached properties worth Rs 11.37 crores, which belonged to various persons arrested under the NDPS Act in 19 cases.