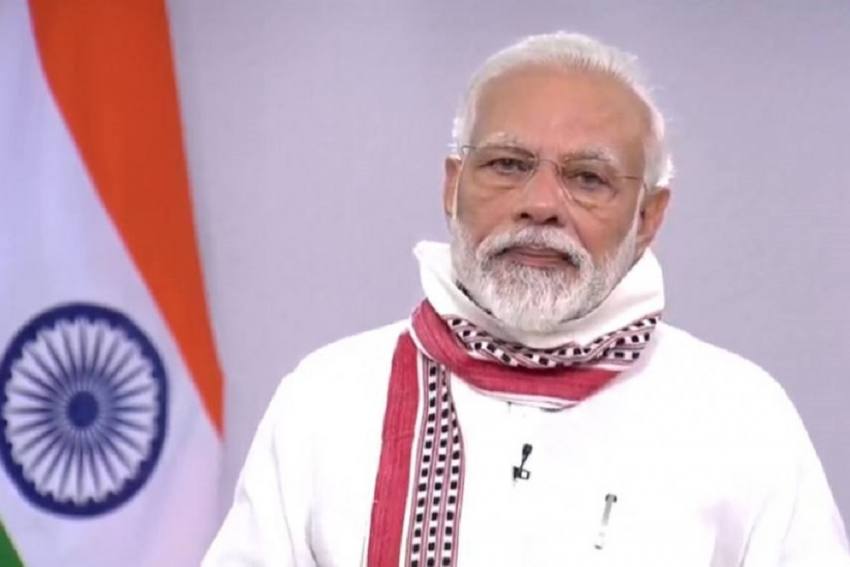 Prime Minister Narendra Modi on Tuesday asserted that the Centre’s recent agriculture legislations will benefit small and marginal farmers. Lashing out at the Opposition, Modi further said that those who are spreading false information regarding the new agriculture laws will be exposed by farmers.

Modi also said that farmers in Uttar Pradesh have already experienced the benefits of the new legislations.

While laying the foundation stone for a statue of warrior king Suheldev in Uttar Pradesh's Bahraich district via video conferencing, he also said that his government was trying to rectify the "mistakes" of previous regimes that did not honour deserving warriors and leaders.

Modi, who unveiled various projects for beautification of Shravasti, Chittora Lake and Bahraich, said the contribution of Maharaja Suheldev has not been given due importance in history books.

“Though Maharaja Suheldev's contribution was not given due recognition in history books, he has always been alive as a development-oriented ruler who worked with sensitivity through the 'lok gathas' (folklores) of Avadh, Terai and Purvanchal,” Modi said.

As the country is entering the 75th year of its Independence, it is time to remember their contribution, their sacrifice and take inspiration from them, he added.

“It is unfortunate that those who sacrificed their lives for saving Bharat and 'Bharatiyata' were not given their place that they deserved. Today's India is rectifying the injustice done in the name of writing history with those who created history. Ridding the country of the past mistakes,” the prime minister said.

Giving examples, he asked if Netaji Subhash Chandra Bose, who was the first prime minister of Azad Hind government or his Azad Hind Fauj's contribution, was given due recognition.

“Today from the Red Fort to Andaman Nicobar, we have strengthened his identity before the country and the world," he said.

He also referred to Sardar Vallabh Bhai Patel, recalling his contribution in uniting smaller states in the country after Independence, and said what was done with him is known to even children of the country.

On Ambedkar, the Prime Minister said his contribution was also only looked through the political prism but now from India to England - all places connected with Ambedkar are being developed as “panch teerth.”

There are several others who had not been given due respect and recognition because of different reasons, he rued.

The projects unveiled by Modi in Bahraich include construction of a 4.20-metre high equestrian statue of the warrior king Suheldev. The projects will also focus on the development of various tourist amenities including a cafeteria, guest house and a children's park there.

Besides the projects, Modi inaugurated a medical college in Bahraich named after Suheldev and lauded the efforts of the Uttar Pradesh government in successfully tackling the coronavirus challenge and leading the state rapidly on the path of development.

King Suheldev, an icon of the Rajbhar community, had defeated and killed the Ghaznavid general Ghazi Saiyyad Salar Masud in a battle on the banks of the Chittora lake in Bahraich in 1033.

After coming to power, the Modi government has taken concerted steps to honour Suheldev.

Before the 2019 Lok Sabha polls, the prime minister had released a postal stamp in the memory of Suheldev and flagged off a superfast train 'Suheldev Express' that runs tri-weekly between Ghazipur in Purvanchal (UP) and Anand Vihar in Delhi.

Earlier, in February 2016, then BJP chief Amit Shah had unveiled a statue of Suheldev and also launched a book on him, in Bahraich district near the Indo-Nepal border, where the medieval king enjoys a legendary status.

During his tenure as UP chief minister, Rajnath Singh, the present Defence minister, had unveiled the statue of Suheldev at an important road crossing in Lucknow.

Rajbhar community members, who consider Suheldev as their icon, constitute a significant percentage of the Purvanchal electorate and are regarded as the second politically dominant force to reckon with after the Yadavs in eastern Uttar Pradesh.

Different parties have been trying to woo the Rajbhar community for electoral support from time to time, say political observers, pointing out that Tuesday's event was taking place when UP assembly polls were less than a year away.