Riding on a massive Modi wave sweeping through most parts of India, the BJP led in 292 seats while the Congress trailed far behind with 51. 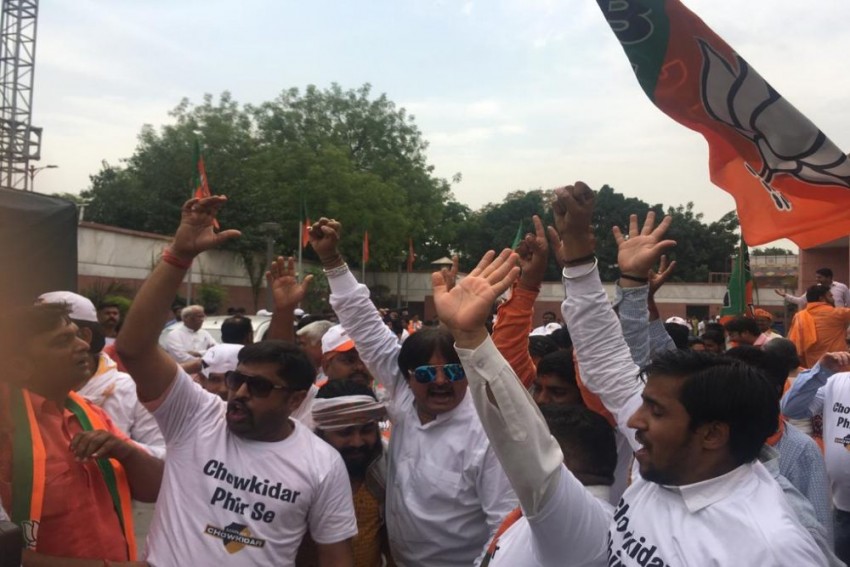 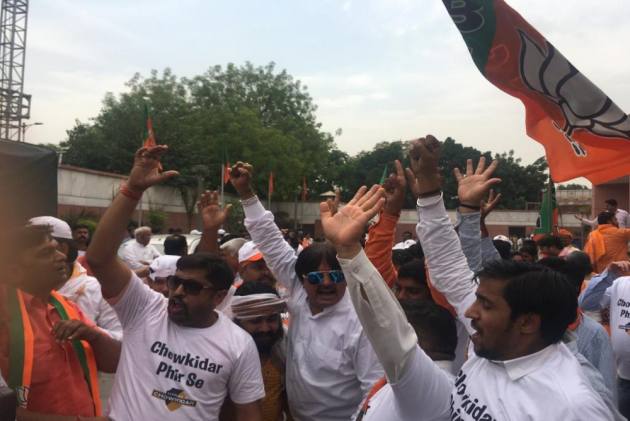 Prime Minister Narendra Modi-led National Democratic Alliance (NDA) is all set to return to power at the Centre with thumping numbers.

Riding on a massive Modi wave sweeping through most parts of India, the BJP led in 292 seats while the Congress trailed far behind with 51, according to trends released by the Election Commission for all 542 seats that went to polls.

If the trends stay until final results, the BJP would have improved on its 2014 performance when it had won 282 seats on its own in the 543-member Lok Sabha. Adding the seats won by its allies, the BJP-led National Democratic Alliance could win 343 seats, up from 336 in 2014.

Markets cheered the trends, as the benchmark BSE Sensex touched 40,000 for the first time and NSE Nifty breached the 12,000 level. The rupee appreciated 14 paise to 69.51 against the US dollar trade.

"Prime Minister Narendra Modi -- Many Congratulations for securing such a big victory for the BJP. I am thankful to the people," External Affairs Minister Sushma Swaraj tweeted.

The results are a resounding endorsement of Prime Minister Narendra Modi's popularity, his government's achievements in the last five years and his campaign, which centred around national security and nationalism. He also relentlessly attacked the Congress Party for what he called its dynastic legacy, and blamed it for the country's woes. The opposition had criticised the BJP campaign as divisive and polarising.

According to the latest vote count, the BJP's vote share was nearly 58 per cent, compared to 33 per cent for the Congress. But the figure is likely to change when the final results are in. Still, the trend shows that the Modi wave has swept across geographies, caste lines, age, gender and economic status.

In the politically critical state of Uttar Pradesh, where the Samajwadi Party-Bahujan Samaj Party combine had posed a stiff challenge, the BJP was leading in 56 of the 80 seats at stake. The SP was ahead in eight and BSP in 12. Although the BJP had won 72 seats in the last elections, the performance is much better than what many exit polls had forecast.

The Congress Party was ahead only in one seat in Uttar Pradesh. Even, Congress President Rahul Gandhi was trailing BJP's Smriti Irani in Amethi by nearly 7,000 votes but was clearly ahead in Wyanad in Kerala.

The Modi wave not only swept through the Hindi heartland and Gujarat, as was expected, but also rippled through West Bengal, Odisha, Maharashtra and Karnataka. Only Kerala, Tamil Nadu and Andhra Pradesh appeared untouched. Even in Telangana, where it was expected to fare poorly, the BJP was ahead in four seats, the same as the Telangana Rashtra Samiti.

"The people on the ground are not buying the narrative of the opposition that people are under threat. People are doing well that they are looking forward to the next government of Narendra Modi. We have to realise that Modi's government inherited very weak economy and he done very phenomenal job (in the last five year)," BJP spokesman Amit Malviya said.

As votes for the seven-phase Parliamentary polls were counted on Thursday, the Trinamool Congress Party was leading in 25 of 42 seats of West Bengal while BJP was ahead in 15, up from two it held in 2014. The Left was wiped out in the state, once its citadel.

The DMK was ahead in 20 seats in Tamil Nadu.

As the trends came in, pointing to another tenure of Modi as prime minister, celebrations broke out in the BJP's party offices across the country with people dancing to the sounds of drums.