President Kovind said he was deeply distressed to hear about the tragic plane accident and his thoughts and prayers were with the affected passengers, crew members and their families. 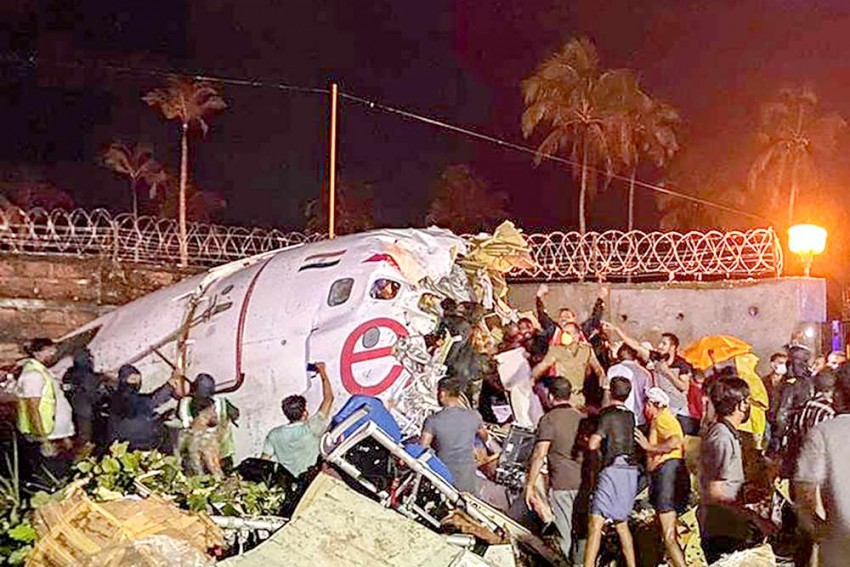 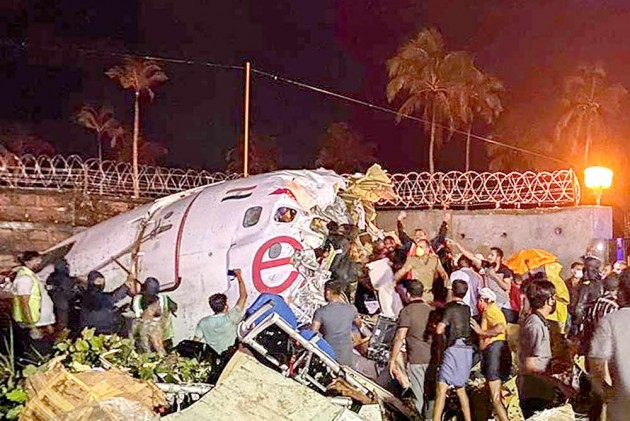 President Ram Nath Kovind, Vice President Venkaiah Naidu and Prime Minister Narendra Modi along with leaders from across the political spectrum expressed anguish on Friday over the Air India Express aircraft accident in Kozhikode and offered condolences to the families of those killed in the tragedy.

At least 16 people were killed and several others injured when a Dubai-Calicut Air India Express flight with 191 passengers and crew members on board overshot the runway at the airport in Kozhikode and fell into a valley, breaking into two portions, police sources said.

President Kovind said he was deeply distressed to hear about the tragic plane accident and his thoughts and prayers were with the affected passengers, crew members and their families.

Kovind said he spoke to Kerala Governor Arif Mohammed Khan and enquired about the situation there.

Vice President Venkaiah Naidu said he was deeply anguished by the loss of lives in the tragic air mishap.

"My heartfelt condolences to the families who lost their dear ones in the crash & prayers for the speedy recovery of the injured," he said.

Prime Minister Narendra Modi also expressed anguish at the Air India Express aircraft accident and said authorities are at the spot, providing all assistance to the affected.

He also spoke with Kerala Chief Minister Pinarayi Vijayan in this regard.

"Pained by the plane accident in Kozhikode. My thoughts are with those who lost their loved ones. May the injured recover at the earliest," the prime minister tweeted.

Authorities are at the spot, providing all assistance to the affected, Modi said.

Civil Aviation Minister Hardeep Singh Puri said all efforts were being made to help the passengers and that a formal enquiry will be conducted by the Aircraft Accident Investigation Bureau (AAIB).

The minister said he was deeply "anguished and distressed" at the accident and relief teams from Air India and Airports Authority of India (AAI) were being immediately dispatched from Delhi and Mumbai.

Giving details of the incident, Puri said, "The Air India Express flight number AXB-1344 on its way from Dubai to Kozhikode with 191 persons on board, overshot the runway in rainy conditions & went down 35 ft. into a slope before breaking up into two pieces".

External Affairs Minister S Jaishankar said he was "deeply distressed" to hear about the tragedy at Kozhikode.

"Prayers are with the bereaved families and those injured. We are ascertaining further details," Jaishankar said in a tweet.

Defence Minister Rajnath Singh expressed deep anguish over the loss of lives due to an accident.

"In this hour of grief, my thoughts are with the bereaved families. I pray for the speedy recovery of the injured," he said.

Congress leader Rahul Gandhi expressed shock at the news of the flight skidding off the tabletop runway and offered condolences to the families of those who died in the accident.

"Shocked at the devastating news of the plane mishap in Kozhikode. Deepest condolences to the friends and family of those who died in this accident. Prayers for the speedy recovery of the injured," he said on Twitter.

"My thoughts are with the crew, the passengers and their families and friends at this time," he said.

Congress general secretary, in-charge organization, K C Venugopal described it as a "shocking incident" and said the governments must take all necessary measures for emergency rescue and help.

Congress general secretary Priyanka Gandhi Vadra said, "My heart goes out to the crew and passengers of the Air India plane that has crashed in Calicut and to their families. Our prayers are with you at this tragic and painful moment."

BJP leader and former Union minister Alphons K J said this was the second tragedy of the day in Kerala after the landslide in Rajamalai.

The mishap occurred at 1941 hours. No fire was reported at the time of landing, an AIE statement said.

There were 174 passengers, 10 infants, two pilots and five cabin crew on board the aircraft, the Civil Aviation Ministry said.