Virbhadra Singh's followers gathered in large numbers to bid adieu to their leader.

An unprecedented ‘sea’ of people emerged at Rampur, the native town of former Chief Minister Virbhadra Singh, ‘Raja’ of Bushahr, to pay a tearful adieu to the towering political leader, whose mortal remains were consigned to the flames with full state honour on Saturday on the banks of Sutlej river, 120 km from Shimla.

This marked an end of an eventful era in Himachal Pradesh’s post-Independence history and the state's journey to its development, economic growth, literacy and emergence as a ‘model of hill development’ in the country, to which Virbhadra Singh was an instrument in the past 60 years.

His son Vikramaditya Singh, a sitting Congress MLA from Shimla (rural) lit the pyre as priests of the royal family of Bushahr performed all rituals and Vedic ceremonies amidst ‘mantras” and slogans by the public – “Raja nahin Faquir tha, Himachal ki Taqdeer tha”.

Earlier in the day, the priests performed the ‘raj tilak’ ceremony of Vikaramaditya Singh ,31 –who was officially declared as “Raja” of Bushahr state, taking over the royal legacy of the family from his late father and a legendary leader.

In presence of Virbhadra Singh’s body he was made to sit at the throne, which Vikramaditya Singh’s grandfather used to occupy in discharge of his functions as “king” of the princely state of Bushahr. Thereafter Vikramaditya Singh performed the last rites –a tradition being followed by the family for years. 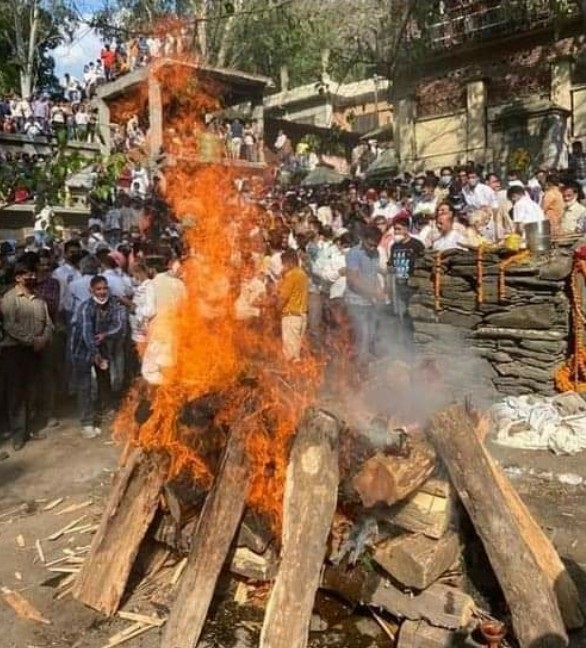 Thousands of people from Himachal Pradesh, and elsewhere from India had converged at Rampur’s Padam palace –an ancestral property of Virbhadra Singh, where his body was kept for “antim darshan’ and enable people, including VIPs to pay their last respect.

Heart-wrenching scenes were witnessed at the Palace complex, which had no space to put a foot on, especially when the mortal remains were being prepared for the final journey to the cremation ground.

There were cries and sobs all over the town, which looked to have come to a halt with men and women pouring from all the places and several also climbed the mountains across Sutlej river to become part of the historic event.

Janki, an elderly woman from Kinnaur was wailing in grief over the loss. “My father has died, I am orphaned. I haven't eaten and slept for the past three days after hearing about him,” she said with tearful eyes .

Old timers recall one similar scene was witnessed when Dr.Y.S. Parmar, first Chief Minister, known as ‘Himachal Nirmata’, died. Shimla had got jam packed with masses towards Sanjauli, where funeral had taken place.

“There were also people who had assembled in large numbers and the road from Root to Sanjuali was overcrowded. I do remember the words of the then Director of Public Relations, late H.K. Mitoo, who was doing the running commentary --“Mein Roots (place where Dr Parmar lived after a private life after his long Chief Ministerial tenure) se bol raha hoon, dosto aaj Himachal Pradesh ki roots hil gayee hein,” recalls B D Sharma, a former Director Public Relations. “But now, it’s like ‘Himachal Pradesh ka but vriksh dyeh gaya hey’,” Sharma says