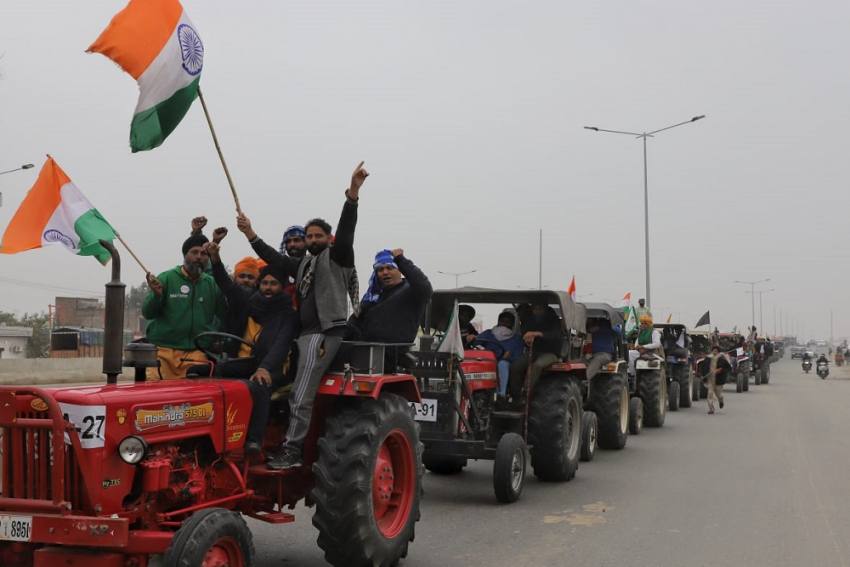 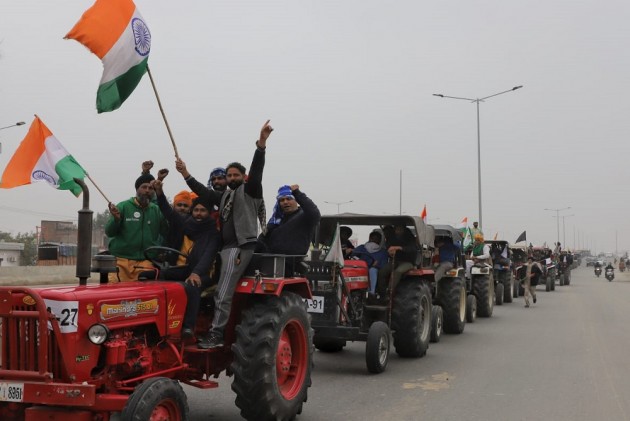 As thousands of protesting farmer unions take out a tractor rally today, security has been increased at several border points of the national capital on Thursday. The rally is organised by Sanyuta Kisan Morcha, an umbrella body of 40 farmer unions, as a continuation of their agitation against the new farm laws.

The rally started at 11 am, and moved towards Kundli–Manesar–Palwal Expressway amid heavy deployment of Delhi Police and Haryana Police personnel stretch. The march, led by BKU leader Rakesh Tikait, will stretch till Palwal in Haryana, and return on the same route.

"In the coming days, we will intensify our agitation against the three farm laws. Around 2,500 tractors from Haryana have participated in today's march.

"We want to warn that if the government doesn't not accept our demands, farmers' protest will get intensified further,"  Abhimanyu Kohar, a senior member of Samkyukt Kisan Morcha, told PTI.

The tractor march started from four different points -- Singhu to Tikri Border, Tikri to Kundli, Ghazipur to Palwal and Rewasan to Palwal.

"The government has been hosting meeting after meeting. They know what we want. We want the laws to be repealed, but all we get are futile talks. With this rally, we want to give them a glimpse of what we can do, and what we will do on January 26.

"Today, the rally is happening on the periphery of Delhi, but when our farmer leaders decide that we need to enter the capital, we will do that," Harjinder Singh, a participant of tractor march from Punjab's Hoshiarpur, said.

There will be diversions at several points on Eastern Peripheral Expressway today, as per an advisory issued by the Police Commissionerate Gautam Buddha Nagar. The expressway from Beel Akbarpur and Sirsa towards Palwal will also be closed for vehicles from 12 pm to 3 pm in light of the farmers' protest.

In addition, those coming from Sirsa side and Beel Akbarpur towards Sonipat won't be allowed to get on the expressway from 2 pm to 5 pm, the police said.

The seventh round of talks between the protesting farmers and Union ministers took place on January 4 and ended on a stalemate, as farmer unions sought an unequivocal demand of repealing the contentious laws.

“Talks remained inconclusive as union leaders remained stuck to their demand seeking repeal of the three new farm laws. No decision could be reached in today's meeting. Both sides have agreed to resume talks on January 8,” Union Agriculture Minister Narendra Singh Tomar said adding that the Centre has requested the farm leaders to point out specific concerns regarding the three legislations.

Thousands of protesting farmers have been camping at  Delhi borders for over 40 days now, undeterred by the severe cold and rains. The national capital has been experiencing a gritty cold wave, with temperatures as low as 1.1-degree Celsius last week, the lowest January has seen in 15 years. But the farmers have said that the protest will only intensify in the coming days.

"It has been seven months since the new laws came into force and the government has held seven round of talks with farmers since then, but it has not listened to seven words of farmers, which are - we want repeal of the farm laws," said Swaraj Abhiyan leader Yogendra Yadav.

Today's tractor rally was initially planned for Tuesday, but was deferred by a day due to bad weather and rains.

Farmer leaders at Delhi's Singhu border also said they will celebrate the festival of Lohri on January 13 by burning copies of newly introduced agriculture laws.

The farmers said they will take out another tractor rally on January 26, on the occasion of Republic Day.

"We will send 10 tractor-trollies from every village in Haryana. We request people to come, at least one from each house," farmer leader Joginder Nain said.

Protesting farmers have stuck to their demands of repealing the new farm laws, a law that guarantees minimum support price, and two other issues. The government, which says the laws will benefit farmers by removing middlemen and enable them to sell crops anywhere in the country, has blamed the opposition for inciting and misleading farmers.

Earlier yesterday, the Supreme Court said it would hear on January 11 a batch of pleas challenging the new farm laws as also the ones raising issues related to the ongoing farmers' protest at Delhi borders.