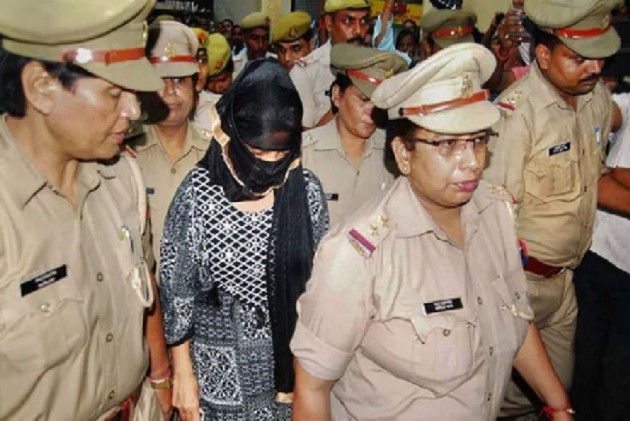 The bail plea of the Shahjahanpur law student, who accused BJP leader Chinmayanand of raping and physically exploiting her for a year, was on Wednesday rejected by the district court, just hours after the woman was arrested on charges of extortion and sent to 14-day custody, police said.

Soon after the woman’s arrest, her counsel Anoop Trivedi said he had filed a bail application that was to be heard in court later in the day.

The plea was, however, rejected in the afternoon.

A local court had a day earlier admitted an anticipatory bail plea filed by the student and fixed it for hearing on Thursday.

The 23-year-old woman was arrested around 9.15 am from her home by a special investigation team (SIT) amid large police deployment.

There is "enough" digital and forensic evidence against the Shahjahanpur law student, the Special Investigation Team (SIT) said.

The SIT Chief, Naveen Arora, said his team had found that Chinmayanand was asked for Rs 5 crore on the direction of the law student. "Those arrested said that they sent messages to Chinmayanand on directions of the girl in panic as they were not getting money and were upset," Arora told reporters.

"We have sufficient evidence that Rs 5-crore extortion money was demanded from Chinmayanand,” he told reporters.

The evidence, including pen drive and mobile, has been sent for forensic examination. "It was found that there was no addition, alteration, morphing, modification or editing in the video (of Chinmayanand taking a massage)," he said.

The mobile location and calls made by the student and others were also verified and a chart was prepared which shows the four -- law student and three already arrested -- were together and in touch, Arora said.

About the spectacles used to film Chinmayanand, the officer said, "It was bought online in March by the girl. The girl said it was in her hostel room, which was opened in the presence of a forensic team, principal, the girl and her father, but it was not found. We are yet to recover it."

He said the mobile messages deleted by Chinmayanand could not be retrieved by the FSL, and it has been sent to the Central Forensic Science Laboratory in Gandhi Nagar, Gujarat.

On Wednesday morning, the woman was arrested from her home in Shahjahanpur and taken to the Kotwali police station. She was then taken for medical examination and would later be produced in court.

The woman was earlier on Tuesday taken into custody but later released by the SIT after the court of Additional District Judge (ADJ) first, granted a stay on her arrest.

The woman and three other boys, who were arrested earlier, had allegedly made extortion calls to Chinmayanand asking him to pay Rs 5 crore or else they would make public his intimate videos.