This Diwali and Id, as we remember and grieve for the victims of terrorism in Delhi, it is time also to remember that the initial goodwill generated by the efforts of the Army and the few NGOs active in earthquake affected J&K urgently needs to be bu 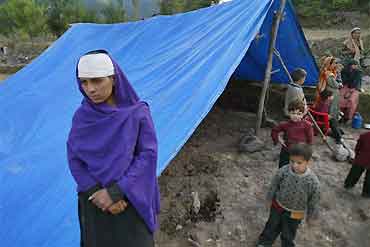 outlookindia.com
-0001-11-30T00:00:00+05:53
If Indian newspapers are to be believed, all is well in Tangdhar, Uri and in other parts of Indian-administered Kashmir devastated by the recent quake that took a toll of some 1500 lives and rendered around 100,000 people homeless. Relief has been provided, so the government claims and so the press reports. Such, indeed, is the shocking indifference of 'mainstream' India to the continued plight of tens of thousands of people living in this remote corner of the country straddling the Line of Control that separates India and Pakistan that they no longer merit even passing mention in the press.

Hussain, a teacher I met in Tangdhar on my visit there last week, remarked how Indian NGOs and corporate houses had responded generously in the wake of the quake in Kutch and the Tsunami in south India, and contrasted this with their reaction to the quake in Kashmir. He had a point when he noted that this indifference probably owed to the fact the victims of the quake in Kashmir were almost all Muslims, and Kashmiri Muslims at that.

A neighbour in Bangalore had virtually slammed the door on my face when I approached him for clothes that we were collecting for the victims of the Kashmir quake. 'They are all Muslims, so it is not our problem', he told me, shamelessly. I heard similar explanations from several other people I had approached, who all uniformly declined my appeal.

The fact that most of the few people in my locality who sent me material for the victims happened to be Muslims saddened me, because it provided more evidence that the quake was seen by many in essentially communal terms, by both many Hindus, of course, but also by many Muslims, several of whom may not have responded to a similar tragedy with similar enthusiasm had it struck non-Muslims.

Yet, this is hardly surprising. For many people in my largely middle-class and 'upper' caste Hindu locality in Bangalore, the Kashmir quake was not a human tragedy but, rather, simply a Muslim affair. One of my neighbours was so brutally frank as to tell me that the quake victims deserved their fate for allegedly supporting terrorism and advocating secession from India.

I do not wish to make any generalizations here. I know of several Hindus who have done yeoman service in rushing relief to Kashmir and even going there personally themselves to help out in the relief work. But, overall, one cannot but help remark on the sheer indifference of ‘mainstream’ Indian civil society to the tragedy in Kashmir.

Such deeply-rooted communal prejudices also probably account, in no small measure, for the fact that few Indian NGOs have responded to the quake at all. While several Muslim organizations, from Kashmir as well as from other parts of India, in addition to some Christian groups and larger international NGOs, are active in providing relief in the quake-affected parts of Kashmir, one gets the distinct impression that the victims of the quake are not a pressing priority for most Indian NGOs. This explains their virtual absence in the ongoing relief efforts in the region.

Tarring all Muslims with the same brush, branding all Muslims in Kashmir as 'terrorist sympathizers', little do my bigoted neighbours and others like them know that the militant movement has hardly any support among the people living in the regions most badly affected by the quake, Uri and Tangdhar. This is, of course, not to argue that the urgency of providing them humanitarian assistance would be any less if their political proclivities were different. The vast majority of the inhabitants of these remote parts of Jammu and Kashmir are Punjabi/Pahari-speaking Muslims, ethnically and culturally quite distinct from the Muslims of the Kashmir Valley.

As numerous army personnel I met in Tangdhar themselves stressed, militancy has failed to take root in the region despite the fact that it straddles the Line of Control, on the other side of which live people of the same ethnic communities. In fact, I was told, many locals have actively assisted the Army in combating infiltration from across the border, and several families also have members working in the Army. 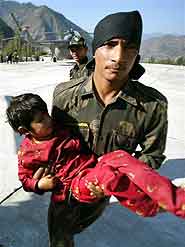 That the vast majority of the locals have stayed away from involvement in the ongoing militancy in Kashmir owes to various factors, including awareness, due to living along the Line of Control, that the economic conditions on the Indian side of the Line are considerably better than across; the role of the Army in sustaining the local economy; the fact that the locals have Backward Class status, which has enabled a number of them to secure government jobs; and the fact that the non-Kashmiri communities of the state, non-Muslims as well as Muslims, tend to see the militant movement as a means to sustain and promote Kashmiri domination.

Arguing that the victims of the quake do not deserve relief because they are allegedly supporters of 'terrorists' is not just inhuman. It is also factually incorrect and only reveals the ignorance of those who make this claim.

In contrast to the dismal response of the NGO sector, the Army has played an active role in providing relief to hundreds of families, particularly in the immediate aftermath of the quake, as many locals I met stressed with gratitude. And herein lies a lesson for my neighbours back home in Bangalore and others of their ilk, who insist that Kashmir is an inalienable part of India but at the same time refuse to help the Kashmiris in this hour of need, with tens of thousands of people rendered homeless and helpless in the face of the oncoming harsh winter.

It is now that the rhetoric of 'winning the hearts of the Kashmiris' is being tested, and if Indian civil society continue to respond to this humanitarian tragedy of gigantic proportions with indifference the result of that test is obvious. What better way, one must ask, can there be to win the hearts of the Kashmiris than to respond generously to the victims of the quake, whose continued plight has been completely invisiblised from our imagination?

This is precisely what victims of the quake who managed to secure some relief themselves testify. As Ahmed, a man I met in Uri whose house was destroyed in the quake told me, 'Had it not been for the Army, many more lives would have been lost'. Or as a man from Parada village near Tangdhar, said to me, 'We have got some aid from NGOs and from the Army, but across the Line of Control in Pakistan-administered Kashmir scores of villages have received no assistance at all from their state or their Army'. 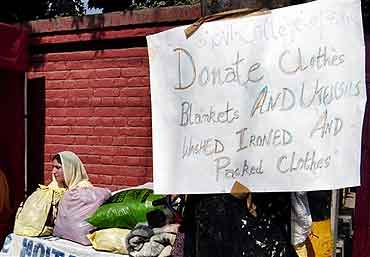 This initial goodwill generated by the efforts of the Army and the few NGOs active in the area urgently needs to be built upon. To do otherwise, to ignore the plight of more than one hundred thousand people in Kashmir whose houses have been destroyed and who are faced with the very real threat of death and starvation this winter, would only strengthen the hands of Islamist radicals, who would bandy it about as yet another 'proof' of Indian or Hindu perfidy and alleged hatred of Islam and Muslims.

We simply cannot allow one hundred thousand people to be made into willing recruits for Islamist militants for no fault of their own, because if the Indian state and civil society do not reach out to them now to provide them the relief that they urgently require militant Islamist groups might well might do so, as they indeed have done across the Line of Control, where now, according to media reports, the Lashkar-i Tayyeba is playing a leading role in relief efforts. Militant groups in Kashmir are not making relief work in any easier for Indian NGOs. When a man I met in Srinagar, who did not conceal his sympathies for the Lashkar-i Tayyeba, bemoaned the fact that Indian civil society had turned a blind eye to the sufferings of the quake victims, I asked him why this should not be so when at the same time the Lashkar insists that Kashmir must be 'liberated' from India through armed jihad. 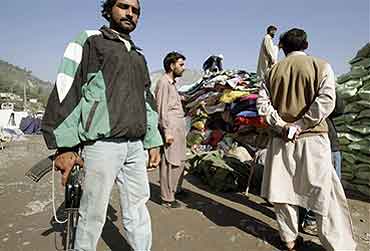 If Kashmir is not part of India, as the Lashkar insists, then why, I said, should he hope for Indians to rush to the rescue of the Kashmiris? How, I asked him, could he reasonably expect Indian NGOs to help the quake victims when even now Army vehicles and pickets in Kashmir are being attacked by militants on a daily basis? How, I argued, could he hope for Indian citizens to respond with passion to the plight of the quake victims when, at the same time, the Lashkar, whom he upholds as a model for Muslims to emulate, tars all Hindus with the same brush, branding them as evil and sinister and even as 'agents of the devil'?

Saturday's devastating blasts in Delhi have added a new dimension to the humanitarian crisis in Kashmir. It is speculated that these might have been masterminded by the dreaded Lashkar-i Tayyeba. If true, it is hardly surprising that these blasts come in the immediate aftermath of the quake. It sends out a powerful statement that despite the quake the terrorists are not down and out, that they are still intact and can strike at will.

It is possible that the blasts might make relief work in Kashmir by NGOs from outside the state even more difficult. People, like my neighbours in Bangalore, might be hardened in their resolve that the victims of the quake deserve no succour at all. Relief teams from other parts of India might think twice about travelling to help out in Kashmir for fear of being attacked.

No doubt this is precisely what groups like the Lashkar actually want. Ongoing moves to allow people from the Pakistani side of the Line of Control to enter the Indian side for relief and medical assistance or non-Muslim Indian organisations being involved in relief work in Kashmir are obviously complete anathema for groups like the Lashkar, whose very ideology is based on unrelenting hatred for Hindus and Indian.

Any moves to reduce tensions between India and Pakistan or between Hindus and Muslims are immediately dubbed as an anti-Islamic 'conspiracy' because they obviously undermine the fundamental postulates of the Lashkar's worldview. Hindus, whether Army personnel or civilians, helping out Kashmiri Muslim quake victims would forcefully challenge the militant Islamists' thesis of all Hindus as 'evil', 'mean', and by definition anti-Muslim. This would also expose as arrant nonsense the argument of Sayyed Ali Gilani, chief ideologue of the Jama'at-i Islami of Kashmir, which presumably the Lashkar would also echo, that 'It is as difficult for a Muslim to live in a Hindu environment as it is for a fish to live in a desert'.

One hundred thousand or more homeless people in our part of Kashmir are threatened with sickness, starvation and death this coming winter. And, because these people are seen principally as Muslims, rather than as victims of an immense human tragedy, by Islamist militants and Hindutva fascists, as well as by large sections of the Indian press, our response to their plight has been pathetically indifferent.

Being framed in communal terms, the continued suffering of the victims of the quake now risks being completely wiped out from our imagination and conscience. What that means for our repeated and tireless profession of concern for the Kashmiri people obviously needs no elaboration.


Yoginder Sikand is the author of Sacred Spaces: Exploring Traditions of Shared Faith in India and Inter-Religious Dialogue and Liberation Theology: Interviews with Indian Theologians and Activists