Instead of trying to find out how not to respond to the reasonable questions raised by the questions, the government, if it is serious about the cause of social justice, would do well to think hard about how to give straight answers. 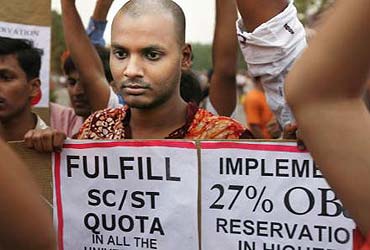 The supporters and the opponents of the OBC reservations in higher education seem to be united in how they read the latest order of the Supreme Court. Both sides are reacting as if the court has given its final judgment. They of course know it is an interim order. But both sides seem to think that the questions posed by the Supreme Court are impossible to answer. Hence the premature triumphalism of those who opposed the policy and the hysteria of the political class that supports, or wishes to be seen as supporting, the quotas.

I beg to disagree with this reading. The questions posed by the Supreme Court in its interim order should be seen for what they are, namely questions. The stay order does not question the foundations of the settled policy on affirmative action. It simply asks some hard questions necessary for fine-tuning the affirmative policies. I think these are fairly reasonable questions that anyone would wish to ask. Therefore, instead of trying to find out how not to respond to these questions, the government would do well to think hard about how to give straight answers.

The SC order could and should be turned into an opportunity to fine-tune the reservation policy. It is a delicate moment. A hasty or knee-jerk response of the kind suggested by some champions of social justice could actually lead to a rejection of the policy itself.

Take the first and simple question of the numbers. The government has argued that the OBCs are 52 per cent and that the 1931 Census is a sufficient basis to arrive at this assessment. That is not a straight answer. Mandal Commission had arrived at the mythical figure of 52 per cent on the basis of deductive reasoning that failed to take into account all the non-dwija upper castes in the country, including large caste groups such as Jat, Maratha, Patel, Reddy, Khandayat and Nair. Once you exclude these groups from OBC, the figure comes to anywhere between 40 and 44 per cent.

The government should know that, if it cares to look at its own data. The latest round (61st round for 2004-05) of the most comprehensive survey available in the country, the National Sample Survey, shows that the OBCs are around 41 per cent of the country's population.

This is consistent with the information available from various rounds of the National Election Study by the CSDS. Sure, this assessment is based on sample surveys, not the Census, and therefore the figure could be off by one or two points. But that does not quite matter for a scheme that seeks to reserve only 27 per cent seats for the OBCs.

The second question is: Where is the evidence to show that the OBCs are under-represented in higher education? The government wishes to hide behind assertion about thousand years of discrimination and oppression. This again is not an appropriate response. We need to distinguish the OBCs from the SC. Dalits have suffered from centuries of oppression and discrimination, but this is not true of all the OBCs. Their disadvantage needs to be established with latest data. A straight response would be to say that we do not have reliable evidence for analysing caste profile of our higher educational institutions.

But whatever we do know about the educational profile of different caste-community groups shows a sharp difference between the OBCs and the 'upper castes'. Once again, the NSS data offers a wealth of reliable information. Professor Satish Deshpande's analysis of this data leaves no doubt that OBCs suffer from a severe disadvantage. If the court wants more solid evidence, the government could get a nationwide survey carried out for this purpose. It may not be a bad idea to appoint an expert committee on the lines of the Sachar committee to establish these facts to the satisfaction of the courts.

The third question is implicit in the court's order: How can we be sure that the mechanism proposed by the government is the best way of redressing this disadvantage?

An honest answer is that we cannot be very sure. The fact is that the mechanism of reservation was adopted without a careful look at other available options. Deshpande and I had proposed an alternative that involves computing a deprivation index based on caste, class, gender and rural location. The Supreme Court order gives the government another opportunity to think about alternatives like this.

And finally, there is the 'creamy layer' question. The Supreme Court order has made it clear that giving the benefit of reservations to anyone on the sole ground of being an OBC is unacceptable, that the policy must exclude the undeserving from taking advantage of the new system.

Now the government can give two kinds of answers. It can either sub-divide the castes that fall under OBC into educationally more advanced OBCs and the most backward OBCs and provide sub-quotas for both. Alternatively, it could exclude the 'creamy layer' following the existing and largely income-based definition. Instead of simple exclusion the 'creamy layer' could be made the last beneficiary of the OBC quota.

This requires the government to face these questions and to admit that the answers given so far are not very convincing. Once it does so, it could appoint an expert committee on the lines of Sachar committee, or still better a standing independent commission, to come up with answers that may convince the court.

Missing this opportunity could lead to irreversible damage to the cause of social justice.

Yogendra Yadav is with CSDS. This piece originally appeared in the Times of India

Is The CBI Covering Up?