Flowing Game Need Of The Hour

The trademark of sub-continental game is smooth, aggressive and attacking hockey. India have forgotten their own strength and are falling back too often, and unnecessarily at that. Surely, the team management has realised the team are vulnerable on 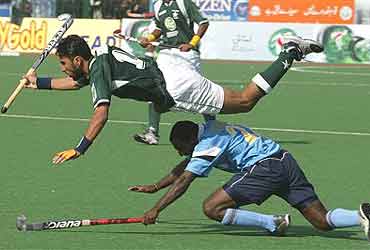 The Indian team raised hopes only to dash them once again. They got into an early lead but then gave it all away with a defensive approach that is becoming hard to understand in a team that is capable of playing flowing hockey.

The trademark of sub-continental game from India and Pakistan is smooth, aggressive and attacking hockey. And that is precisely what India is not playing right now. They have forgotten their own strength and falling back all too often, and unnecessarily at that.

The net result of this was a 2-3 defeat in the bronze medal play-off match against Pakistan yesterday. This was the third successive time that Pakistan had beaten India in a bronze medal match at the Champions Trophy.

The final was won by Spain who stunned a somewhat over-confident Dutch side and halted their march to a hat-trick of Champions Trophy titles.

Both Spain and Holland are playing wonderful hockey and have shown great preparation with an eye on the long term, like the 2006 World Cup and the 2008 Olympics.

While one tries to figure out what is wrong with Indian hockey at this stage, one also needs to emphasise that Pakistan too are having problems in becoming a world-beating side. However, at the same time, Pakistan are sticking to their basics, of flowing hockey and attacking. Sure they are conceding goals, but they are also scoring a lot.

One must admit that the Indians are severely lacking forwards, and, worse, we are playing with just three or four forwards whose firepower in any case is rather weak.

The Indians are missing too many chances upfront, and then leaving too many gaps in the rear. So, the defensive tactics are clearly not working for us.

When a new coach comes to take care of the team, there is always this gestation period, and he needs time to settle down and understand the nature of hockey the boys play and are capable of. So, surely, the team management has by now realised that the Indians are always vulnerable when they go on the defensive.

Time and again, we have seen that Indian teams are unable to hold on to the lead when they go on the backfoot. Add to that the lack of ability to score and we have a lot of problems in hand.

It is easy to pass on the excuse that this is a young team that is being built up for the future. But that is what everyone has been saying for a long time. Each time a new coaching set-up comes, that is what we get to hear.

Many of the players from this team will be representing India at the junior World Cup next year. And when these players, who have now been asked to play defensive hockey, combine with other juniors, who are playing attacking hockey, we will once again have a lot of problems as there will be a clash of styles within the same team.

Whatever kind of hockey a country plays, it has to be similar in nature across all age groups. Simply because it is the juniors who are expected to fill into the shoes of the senior team when the time comes.

Pakistan conceded the first goal because of a lapse in defence as they gave away a penalty corner, which Sandeep converted.

But Pakistan got back the goal through Sohail soon after. Goalkeeper Adrian D'Souza was said to have recovered from his hamstring injury and was brought back into the game, but he was more subdued and not as effective as in the previous matches

Though they were glimpses of vintage Indo-Pak hockey, the fact of the matter is both teams are struggling in defence and strikepower. They are missing chances and allowing too many gaps at the back.

The Indian defence conceded seven penalty corners in the match. However, stalwart Sohail could not manage more than one, and Mudassar converted one towards the end. They also missed many chances on the field. India, on the other hand, scored twice through set pieces, but wasted many other chances.

One word about that brilliant goal by Rehan Butt. He showed remarkable presence of mind and speed while connecting a rising and powerful cross from Shakeel Abbasi and deflecting it in.

Also, there was news that Sohail is calling it a day. May be he feels with the next Asian Games two years away and Olympics four years from now, he may not last it. Going out at the top is better than being sent out unceremoniously as many senior and good talented players have learnt in the sub-continent.

Now, with no major big event slated for the seniors in the near future, it is time for the hockey officialdom to sit down and chalk out a road map for the future.