After the 'moral victory' against the Aussies, the 39-year-old hopes to carry forward his good form against India. 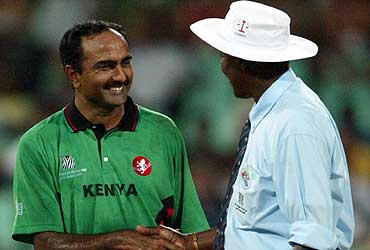 Yusuf Karim's knee must have felt a lot better after watching his son Asif spin a web of tricks around Australia's marauding batsmen at Kingsmead in the World Cup Super Six match on Saturday.

The elder Karim is in a Mumbai hospital for the last three weeks after a knee replacement operation while his son is planning to make the Indians buckle under his guiles in the semi-finals at Kingsmead on Thursday.

The 39-year-old Asif conceded only seven runs from his 8.2 overs and picked three wickets to upstage Brett Lee for the man of the match award -- his first in an international career which started 23 years ago!

And Karim is hopeful of carrying his good form into the semi-final match against India.

"If anything, the noble five-wicket loss to Australia has emboldened our fledgling team ahead of the India match," said Karim who is also an accomplished lawn tennis player. He played (and lost) Davis Cup against Egypt in 1988, and juggled between the two sports until Kenya's World Cup qualification in 1994.

During that eventful match against Australia, Karim first forced Australian skipper Ricky Ponting back on to the crease and then trapped him leg before wicket. Soon afterwards, he slid a ball across the left-handed Darren Lehmann that caught his outside edge and then with a slower delivery coaxed Brad Hogg to spoon up a return catch.

Australia were reduced to 117 for five and neither Ian Harvey nor the notoriously destructive Andrew Symonds could fathom his deliveries.

"Morally, we won the match," Karim said.  "I think what came out of it was that we believe in ourselves now. We were playing against Australia and were 3-3 at one stage but we finished the 50 overs. They were 100-1 at one stage but we put the pressure back, says it all."

Karim is a cricketing 'dinosaur' at 39 and could find a place in the Kenyan World Cup squad only after the cricket body over-ruled captain Steve Tikolo and lured him away from his Nairobi insurance broking business.

Tikolo's objections were understandable. Karim had never taken a wicket at a World Cup and had hardly played the game since his retirement after captaining Kenya at the 1999 tournament in England.

"Before the World Cup, we had a tour to Zimbabwe which was not going very well. We needed some experience," said Nipun Patel, the head of the Kenyan delegation, who approached Karim.

"There was apprehension because the place of a young cricketer was being given to a senior, but our options in Kenya are very limited."

Though Patel insisted the "apprehension" was not shared by the players, it is learnt Tikolo expressed frustration that two promising young cricketers had been overlooked for Karim and 28-year-old Alpesh Vadher.

But all that is history now as Kenya have developed a delightful and daring habit of upsetting the balance at this World Cup.

For Karim, his performance against the world champions has vindicated his controversial selection. "I was very busy with my business and my family, but when my country called, I moved everything around to come to this World Cup," he said.

"It was a bold decision, but the results speak for themselves. By the grace of God, it is working," he said.