There appeared to be such competition to hold candlelight vigils at the Gateway of India that people ridiculously held candles to a bright noon sun. These protests are of the feel good variety, where the crease of your shirt does not get crumpled or 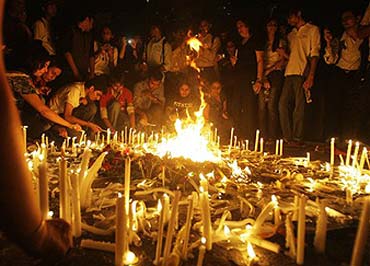 In the five days I was in Mumbai last week, I was invited to as many as six candlelight vigils at the Gateway of India near the Taj Colaba, one of the most discussed sites of the terror attack. The candlelight vigils promised interesting sideshows too like the one detailed in this mailer that reached me: "On Wednesday please gather at the Gateway of India at 6 pm sharp in the evening. Everyone must get a passport photo (if not passport any other will also do). At 5.57pm, after singing the national anthem, we will burn the photo in a symbolic act of self-immolation to show the terrorists and the vermin politicians that we are ready to die for south Mumbai. Do not forget to bring a box of Ship matches. Kindly pass on this urgent message to friends and family too. Please invite media persons whoever knows any."

The tone of all the invites I received was more or less similar. There was anger and urgency in them, but they sprang out of a deep personal insecurity than out of an enveloping collective sorrow. The purpose of the vigils, as you would notice in the mailer quoted above, was narrowly defined. The vigilante seemed to exclude more than include. South Mumbai was their world and in South Mumbai, Taj was what mattered most. The rest of the places that had seen terror on 26/11 and also earlier wore a halo of anonymity. I wondered why the Chattrapathi Shivaji Terminus never became the venue of a candlelight vigil. Even amidst the seeming surge of emotion built around the Gateway of India, there was also an unfailing practical sense that ensured media presence.

I noticed a kind of self-indulgence and romance at these candlelight vigils. I recognise their significance when sparingly employed in the sunset hour, but if summoned often I wonder if they really do anything other than create pretty silhouettes? I also wonder if these vigils are an easy catharsis for the middle class that dreads any greater commitment. There appeared to be such competition to hold candlelight vigils at the Gateway that people ridiculously held candles to a bright noon sun too. In today's urban India, candlelight vigils have come to replace human chains that people built as a form of protest a generation ago. If you think I am unfairly attacking an innocuous display of emotion, let me clarify that I am not attacking anybody's right to peaceful protest, but am only holding a mirror to a mindset that has very often failed us as a people.

The candlelight protests are of the feel good variety, where the crease of your shirt does not get crumpled or the police lathi does not break your bone. They are not even a watered down version of the Satyagraha or the civil disobedience movements. This kind of protest is where you herd together for a further round of chitchat. These protests generate flimsiest of attention spans, both in the vigilante and the viewer. They usually last as long as the TV channels are beaming the idyllic glow and the candles meltdown. There is no follow up, no continuity, only a one-time downloading of guilt. Since nobody thinks through these protests or develops it as part of a larger strategy, the target of these protests are also often misplaced. The Mumbai candlelight vigils more than focusing on terror or expressing solidarity with the victims put out a very negative message by targeting politicians. They wanted all of them to be thrown into the sea!

This so called educated class, which wrote abuse against politicians on the placards they carried were not even aware of the political system that governed them. They did not seem to care for the very political system that encouraged them to protest and speak out. They wanted to assassinate a system that would never stifle their emotions. They did not work on a constructive message to reform it and build greater accountability, but in their casual rage propagated an authoritarian rule. We should remind ourselves that three decades ago it was the same class of people who were happy with the Emergency that Indira Gandhi clamped simply because the trains and buses ran on time and people promptly cleaned the streets. Their shallow message could not be missed then and it is amply clear now.

There is some kind of victory being claimed by these candlelight wallahs that their protests consumed the chair of the union home minister, the chief minister of Maharastra and also the state's deputy chief minister. This again is a misconstrued notion. The three lost their power because of political calculations that ran very deep, like scoring a point over the BJP that was on a rampage with the terror issue in states that were going to polls and also because the anger of people ran much deeper and was spread across much wider than south Mumbai. Shivraj Patil's inefficiency and Deshmukh's incompetence were topics of discussion for a longtime and the attacks only offered an excuse to get rid of them. And for the candlelight anti-politician sloganeers, the replacements for the three chairs were not CEOs of corporate houses but another set of politicians.

Self-importance and self-righteousness that overcame this class of people who held candlelight vigils at the Taj had deadly manifestations across the country. In hindsight, one of its most disturbing expressions was at Major Sandeep Unnikrishnan's Bangalore residence. The anti-politician anger touched a new high when in full media glare the martyr's father, Unnikrishnan Nair, humiliated and chased out the 86-year-old chief minister of Kerala, V S Achutanandan, who had come to offer his condolences. Achutanandan, who had gone there as a representative of the people of Kerala, was old enough to be Sandeep's grandfather and one only expected a certain graciousness and restraint on the part of the family. Never mind if you did not like him as a politician or found his hybrid Communism disgusting, yet one could have respected his age. Death, at least momentarily, wipes out lines of enmity, but here it had unfortunately aggravated it.

Contrast how Kavita Karkare, the widow of the Mumbai ATS chief, dealt with Narendra Modi when he arrived at their doorstep. Modi had publicly abused her husband, who was investigating the Hindu terror apparatus, only a couple weeks ago, but she did not allow that to overpower her solemn silence when the Gujarat CM came calling. "It is part of our culture to be hospitable to visitors, and Modi is an elderly person," is all she would tell reporters later.  She personified civility and graciosuness that was enough to show Modi his place. The Unnikrishnan family too in the face of an enormous tragedy had held their emotion and anger back when other politicians had come calling earlier, but one can't explain why they let it fly when the CM of their home-state came visiting. I would of course give the benefit of doubt to the bereaved family. However, Unnikrishnan Nair later reasoned his action before TV cameras and said that he was angry because Achutanandan had come only out of "political compulsions," but what better reason did he think had prompted Karnataka CM Yeddyurappa or other politicians to visit him?

Even as I ponder over this question, the local newspapers have reported that Sandeep's parents have accepted a sum of Rs. 15 lakh from the Kerala government. Some compromise has been stuck, but how sure is the family that the money is not being disbursed out of political compulsions and public pressure? And why should 'political compulsions' and 'public pressure' be such a bad idea in a democracy? Isn't it after all its strength? Let's hope the candle wallahs will reflect on this.