BJP Says PM Modi Made Kochi Metro A 'Reality', The Foundation Was Laid By Manmohan Singh

A long-cherished project of Keralites, the foundation of Kochi Metro was laid by then Prime Minister Manmohan Singh on September 13, 2012. 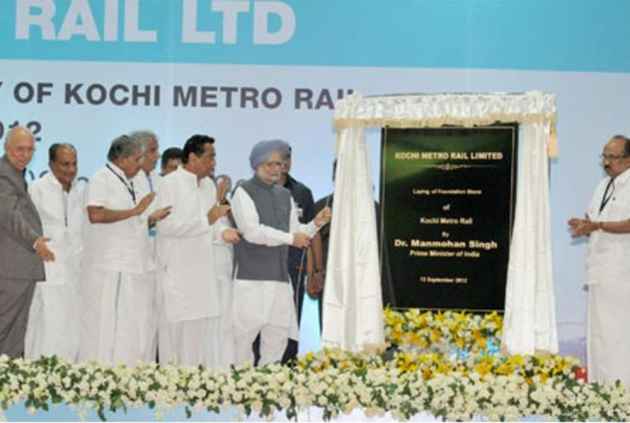 Ahead of PM Modi’s inauguration of the Kochi Metro today, the BJP saluted the man “who made Kochi Metro a Reality”. That man though, was former UPA PM Manmohan  Singh, who had laid the foundation stone for the project in 2012.

Congress party’s Rachit Seth pointed out that the BJP hoardings in the state claimed that it was Modi who had made the Kochi metro a “reality”.

So here is "BJP Lie of the Day" for Today ! Kerala BJP claiming- #KochiMetro is reality because of Modi ji,Reality: MMS made it one #LiarBJP pic.twitter.com/zF0GqjMAQo

A long-cherished project of Keralites, the foundation of Kochi Metro was laid by then Prime Minister Manmohan Singh on September 13, 2012.

The approval of the project was given under Singh’s second term as PM, on July 4, 2012.

The inauguration of the metro today was mired in controversy earlier when reports claimed that ‘metro man’ E. Sreedharan would not be a part of the ceremony. Sreedharan was part of the launch today though, among more speculation that he may have an outside chance to be the NDA’s Presidential candidate.

Kerala Governor P. Sathasivam, Chief Minister Pinarayi Vijayan and Union Urban Development Minister M. Venkaiah Naidu and Sreedharan were among those who accompanied the prime minister in the train.

After cutting the ribbon at the Palarivattom station, Modi shook hands with the chief minister and Sreedharan before proceeding to board the metro train.

After the train ride, the dignitaries left for the Jawaharlal Nehru Stadium at nearby Kaloor for the formal inaugural function.

Considered the fastest completed metro project in the country, Kochi Metro, the flagship transportation infrastructure project of Kerala, will start its regular operations from June 19.

The estimated completed cost of the metro touched Rs 5,181.79 crore.