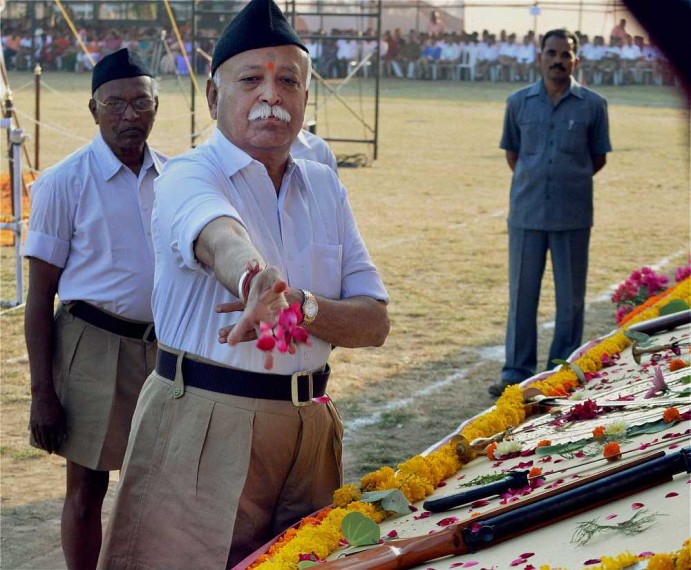 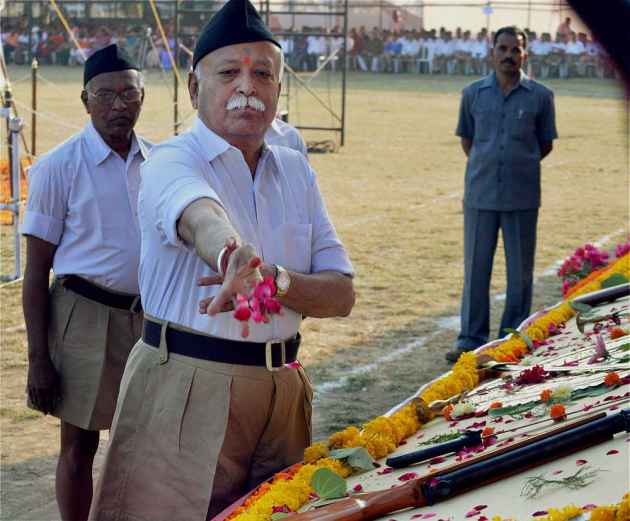 The RSS supremo Mohan Bhagwat (or to call him out in the way he is referred to in the Sangh – Sarsanghchalak Param Pujya Shri Mohan-ji Bhagwat-ji) has now joined the pavilion of eminent Bharatiya moustachioed misogynists. In a breathtakingly revealing statement, he has told us that rapes happen in India, not in Bharat. What he means is that rape only occurs in urban areas where the influence of Paschatya Sanskriti (western culture) leads women astray into being raped by men unable to help or control themselves in the face of the assault of women, out and about, by day and night, defying Mohan Bhageat’s Sangh-mandated Lakshman Rekha.

When an upper-caste landlord in a village claims his ‘droit de seigneur’ (land-owner’s claim) with a Dalit woman, it is not rape, it is a yagya, a time honoured shastric ritual. When husbands persuade minor wives on their ‘suhaag raat’ with a few disciplinary measures that leave them with black eyes and sore limbs, it is not rape, it is the carrying out of an Upanishadic injunction. When swamijis, babajis, acharyas and prachaaraks have their way with ignorant and naabaalig shishyaas, it is not rape, it is the partaking of the naivedyam of a woman’s body. It is the realisation of a pushp ki abhilasha, even if the pushp gets pushed around a little bit in the process.Yo-Yo Honey Singh, that other eminent Yug-Purush echoed Shri Mohan Bhagwat when he asserted in his prayer, C***t Vol.1, that he would cure the waywardness of the Indian woman’s sex organs by strictly traditional, bharatiya and shastric methods.Yo Yo Mohan Bhagwat. Parma Pujya Honey Singh. Sambhavami Yuge-Yuge.

These gentlemen truly deserve Mardangi Maryada Medals (MMM) or Paurush Pratiraksha Puraskars (PPP). In these beleagured times, when Bharatiya masculinity has faced such severe stress and strain, it is only real self-serving (swaysmsevak) men like Mohan Bhagwat and Globally yet Traditionally Bharatiya International Villagers like Yo-Yo ji Honey ji Singh ji who can hold up its otherwise flaccid standard against the corrosive attack of urban femininity.

Hey Bharat-Purush, gird your loins, hoist your petards, tackle your gaandiv, gather your legions. Mohan Bhagwat has sounded the panchajanya. the battle is joined, you have able and eminent warlords. S.O.P. Shri Abhijit Mukherjee of the Congress Party will lead the charge against dented and painted enemies. Shri Narendra Modi and Shri Raman Singh (both BJP) will demonstrate how well rape either by righteous rioters or by counter-insurgent policemen can defend Hindu honour and national security. Comrade Anisur Rehman of the CPI (M) will defeat all his female adversaries designs by buying and selling them. Shri Naveen Jindal of the Congress Party will handle the war-chest and rally the troops of the brave Khap irregulars. Shri Shahshi Tharoor of the Congress Party will tweet the name of every woman fallen in the battle-field. Shri Botsa Satyanarayan of the Congress will secure the hours after midnight so that no wayward women are about. Yo-Yo Honey Sing will lead the yuddha-ghosh, the martial music band. Janaab Akbaruddin Owaisi of the Majlis Ittehadul Muslimeen will behead errant women writers. Baba Ramdev ji will straighten all queer women with yogic power. Shri Kailash Vijayvargiya (Kailash Vijavargiya, Cabinet Minister in BJP ruled Madhya Pradesh where he is – Minister of Industries & Employment, Information Technology, Commerce, Rural Industry, Science & Technology and a passionate leader who continuously strives for development while advocating that women will not find themselves raped only if they stay within the Lakshman Rekha of Bharatiya Sanskriti will map the battle-field. You need all the strength that you can get.

Many years ago. I was a young and nervous assistant working on a documentary film on the RSS called ‘The Boys in the Branch’ (directed by Lalit Vachani). The film was shot in Nagpur, partly in a sort of ‘commune’ where some young men in their late teens, an elite crop from various RSS shakhas (branches), were being groomed for future leadership within the organization. We also shot extensively within the RSS headquarters, Hedgewar Bhavan, in Mahal, in Nagpur. We interviewed Mohan Bhagwat, who gave a chillingly lyrical account of how a particular game-exercise helped a young swayam-sevak mentally prepare himself for the ultimate sacrifice by linking death to re-incarnation, through a series of calisthenic metaphors and manoeuvres, such that death itself could become a move in a game. During this time, I got to be friends, In a way, with some of the boys. Occasionally, I would spend a night with them in their ‘house’. They would cook, sing, play the flute, ask me about Delhi, about girls, about whether i had any Muslim friends, and what they were ‘really’ like. I never made a secret of what my politics was, or the fact that I had a ‘communist’ upbringing because of my family. But sort of grudgingly at first, and less grudgingly later, they gave me a sort of ‘enemy respect’. More importantly, because I was someone close to them in age, and a total outsider, they sort of trusted me with their secrets. I have never betrayed those confidences, even as I sometimes wondered what happened to some of those who spoke to me, mainly off camera, after the shoots were done.

One day, one of the boys asked to see me and the director, in our hotel room. He came late in the evening and talked for many hours. He spoke about being sexually abused by senior functionaries within the RSS for several years, inside the RSS headquarters, beginning around the time when he was eleven years old. I strongly felt that we should not record his testimony, because I was aware that even if we protected his identity in the film, there was no way by which his anonymity could be safeguarded, especially within the RSS headquarters. Basically, he would be ‘disappeared’ in a way that I don’t even want to think about. We talked long into the night. He left, and told me he felt better after having talked, without shame, to someone his own age who could listen without standing in judgment. He told me that he was leaving Nagpur. I never saw him again. I have no idea where he is, and I don’t really want to know. But I think of him sometimes, wonder how he is doing, whether he found the kind of love and affection and respect he wanted. Whether he has any nightmares. I wish him well, and hope he is as far away from the enclaves of Bharat presided over by the RSS as it is possible for him to be. I do not remember his name. He is another unknown citizen.

The RSS wants to be to be an arbiter of public and private conduct to ‘Bharat’. It wants to be what the Vatican thinks it is within the domain of Roman Catholic orthodoxy. Both are citadels of misogyny and homophobia. Both conceal under their knickers and robes the darkest secrets of abuse and violence. The sexual abuse of minors is statutory rape in most jurisdictions. The yagya of statutory rape has a time honoured place in the dungeons within the citadels of Bharatiya and other kinds of purity. Perhaps it is time that this pretence at purity was shown up to be what it actually is.