Extricating their side from a precarious 149-4, Simon Katich (81) and debutant Michael Clarke (76 not out) combine nimble footwork with bold attitude to blunt the Indian spin attack and place the visitors comfortably at 316-5. The duo stitch together 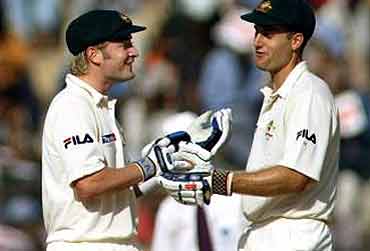 Debutant Michael Clarke showed no signs of nerves as he struck an exhilarating unbeaten half century to put Australia in command in the first Test against India at the Chinnaswamy Stadium today.

Clarke, coming in for an injured skipper Ricky Ponting, negotiated the famed Indian spinners with ease on a turning track to remain unbeaten on 76 and take his team to a comfortable 316 for five at close on the opening day.

Stand-in captain Adam Gilchrist was 35 not out at the other end on a day which saw the visitors largely relying on their young batsmen to recover from the loss of three quick wickets in the post-lunch session.

The 23-year-old Clarke struck 11 fours and two sixes, including one off leg spinner Anil Kumble, who had his joy of reaching the 400-wicket mark somewhat spoilt by the marauding right-hander.

Clarke's cavalier innings also put in shade the assured performance of Simon Katich who more than lived up to his promotion to the number three slot.

Left handed Katich was the only other Aussie batsman on view today to handle the spinners with authority.

With nimble footwork backed by bold attitude, Katich made 81 from 168 balls before he became Kumble's 400th Test victim.

Kumble, who had earlier dismissed Damien Martyn (3) and Darren Lehmann (17) to leave Australia struggling at 149 for four at one stage, became only the second Indian to reach the milestone.

The day's score was a far cry from 149 for four that Australia found themselves in soon after lunch.

After a cautious start by Matthew Hayden and Justin Langer, the Australian innings picked up momentum thanks mainly to Langer and Katich who added 74 runs for the second wicket before Kumble struck his double blow.

Hayden, who had been a colossal with the bat on the last tour, perished while trying to sweep Harbhajan in the 18th over.

But Langer survived the first session and opened up after the break before Irfan Pathan yorked him with a toe crusher. The left hander faced 126 balls for his 52 that was a right mix of caution and aggression. 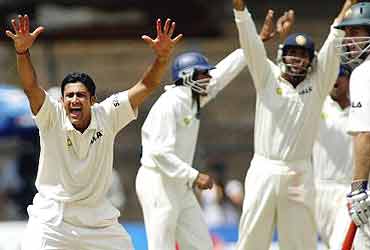 But it was Kumble's dismissal of Martyn and Lehmann in the space of four overs that swung the pendulum in India's favour.

Kumble had Martyn caught bat-pad by Aakash Chopra at forward short leg before a circumspect Lehmann tried to hit him across the line, only to edge a soft catch to Rahul Dravid at first slip.

It was then that Katich and Clarke came together for what turned out to be a record fifth wicket partnership against India.

After blunting the vicious turners of Harbhajan and the testing line of Kumble, the two began to play their shots.

The run rate, which had hovered over 2.8 till then, jumped to above five in the post-tea session which saw 139 runs flow from 32 overs.

Whereas Hayden had used the sweep shot against the spinners three years ago, both Katich and Clarke used their feet to stamp their authority.

Harbhajan might have adopted the wrong line on and outside the leg stump but Katich repeatedly stepped out and lofted him over the top.

Clarke at the other end was in a belligerent mood, and Kumble was the bowler to bear the brunt.

After pulling a long hop from part-time bowler Virender Sehwag over the mid-wicket fence, Clarke took Kumble head on, lifting him over long on and driving him on the off.

Just when it seemed the Australians were breaking loose, a lucky break came India's way.

After adding 105 runs for the fifth wicket, to better Australia's previous best of 99 between Kim Hughes and Bruce Yardley, Katich missed a pull-sweep off Kumble and the ball rebounded of his body to knock the bails down.

But there was no respite for the Indians as the scoring got even better with the arrival of Gilchrist.

The ploy to delay the second new ball backfired as Clarke and Gilchrist swung their bat freely.

Zaheer Khan might have been the weak link in the Indian bowling. The left arm seamer hit the right line and length straight away but lacked a yard or two in pace.

The hosts also had another worry with skipper Saurav Ganguly injuring himself on the field. Ganguly writhed in pain whenever he had to chase the ball and at times placed himself in a close-in position.

India Let Pak Off The Hook