'Anti-National Elements Are Trying To Exploit The Situation'

The home minister says he has ' reiterated the instructions to the CRPF to observe maximum restraint while dealing with rioters and stone pelters' and appeals to 'parents to ensure that their children are at home when curfew is imposed'. 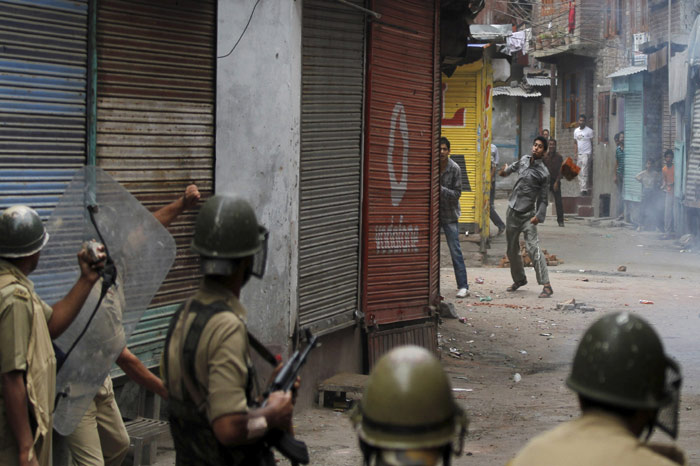 I have just heard the statement made by Shri Omar Abdullah, Chief Minister of Jammu and Kashmir, and I endorse every word of that statement.

The incidents that have taken place in J&K in recent days, including today, are deeply regrettable. I am particularly saddened by the fact that lives have been lost.

The CRPF is deployed in J&K to assist the State Police. Under standard operating procedure, CRPF and the J&K Police carry out their assignments jointly. Invariably, it is the State Police Officer who is in charge of the deployment and performance of duties assigned to the CRPF. I am told that, as far as possible, Magistrates are also present when the security forces are deployed to control rioters and to restore law and order.

I have, today, reviewed the incidents in J&K since June 11, 2010. On June 25 (at Chankhan Bridge, Sopore) and on June 28 (at Kapra Cinema Hall, Sopore) the CRPF had to use force in self-defence. On June 27 (at Muslimpeer, Sopore) the CRPF had to use force on stone-pelters. In the other incidents, the CRPF and the J&K Police had acted jointly. Whether excessive force was used during any of these incidents is a matter that will be enquired into. I may point out that since June 25, 53 CRPF personnel have been injured in the two districts of Sopore and Baramulla. In the incident on June 25 (at Chankhan Bridge, Sopore), a CRPF inspector and a CRPF jawan suffered bullet injuries. The people of J&K must therefore reflect on the nature of the challenge faced by the security forces. Nevertheless, I have today reiterated the instructions to the CRPF to observe maximum restraint while dealing with rioters and stone pelters.

I join the Chief Minister of J&K in appealing to the people of J&K to respect the law and, especially, observe the curfew regulations wherever curfew is imposed. I would especially appeal to parents to ensure that their children are at home when curfew is imposed. The object of imposing curfew is to ensure that crowds do not collect and stones are not pelted. The Central Government will support the J&K Government in its efforts to put an end to violations of curfew, stone pelting and rioting.

There are reliable reports that anti-national elements are trying to exploit the situation. Some militants may also have sneaked into the valley to trigger violence. I appeal to all those who believe in peace and development to stand by the State Government and help the State Government restore law and order.