'The Man India Awaits' has been seriously challenged for that role by this aam admi with a cap and muffler, who broke out into an old Hindi film song about brotherhood 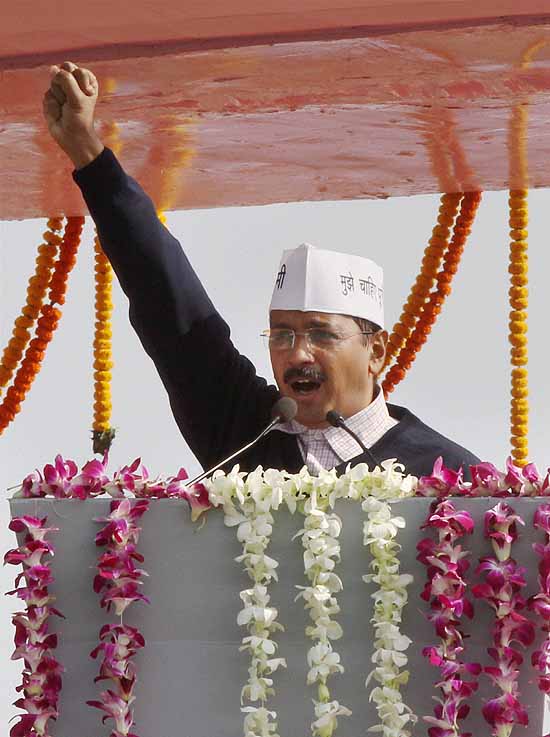 After attending the swearing in of AAP at Ramlila Maidan I believe that Arvind Kejriwal is poised to win the battle for our imaginations. But he could yet be sabotaged by a system that is very uncomfortable as he challenges privileges that have existed for decades.

As things stand now, in 2014, the BJP is still easily poised to be the single largest party. But the idea was that Narendra Modi should dominate the popular imagination and be posited as the Man India Awaits. He has been seriously challenged for that role by this aam admi with a cap and muffler, who talks against "ghamand" (arrogance) and threatens to embarrass anyone who has a lal batti (red beacon). And then to top it all breaks out into an old Hindi film song about "bhaichara" (brotherhood)!

The Manna De song from Paigham

There are many valid critiques of AAP, even as everyone must celebrate the fact that ordinary people in Delhi feel involved in the process of government and elections. One of the most persistent has been whether AAP has a larger idea of India beyond the narrow good-versus-evil idea of fighting corruption. Given the current realities of Indian politics, where the BJP is poised to emerge as the single largest party, it is often pointed out that AAP has not taken a strong stand against communalism or Narendra Modi (with the exception of lawyer Prashant Bhushan who does so in his individual capacity).

Arvind Kejriwal takes charge, vows 'we are here to serve'

Today at Ramlila Maidan a Muslim family told me that the song Arvind Kejriwal sang (insaan ko insaan se ho bhaichara) was enough for them. The people who claim to be fighting communalism, they said, were the ones who "keep us frightened". Why should everyone talk about Modi, Hamid told me angrily, there are other issues also and that is another battle. He said that Arvindbhai "must have chosen" that song because it was the day after Modi gave his  "jhuTaa bayaan" (false testimony expressing remorse for the 2002 riots).

At the same time, a few others in the crowd said that they have high regard for Modi, but if Kejriwal and AAP would stand for national elections that is where their vote would go. The consistent chanting of Bharat Mata ki Jai and Vande Mataram, should worry the BJP as much of the crowd would have been their natural constituency. Indeed these are slogans but part of every BJP rally. A friend accompanying me argued: "why has politics of communities made these slogans the property of the BJP. Isn't it good that AAP should reclaim them?"

If we apply the normal caste and community criteria to the AAP cabinet, it certainly is not representative. Yet what is also clear is that something new is happening, breaking all the old rules and criteria.

It is almost a certainty that the bureaucracy and the private sector (unhappy with AAPs stand on power sector) will try their utmost to subvert AAP. The new regime in the city-state of Delhi will find themselves being trashed, attacked and pilloried by sections of the media.

When the swearing in was over, I walked a few kilometres to find an auto-rickshaw as there was a near stampede at the metro station. Finally I came across Mohammad Insaaf, who drove an auto and lived in Madanpura slum across the Yamuna. He was full of hope about AAP. As he saw it, communalism was less of a problem than the fact that at every step of his life he has to pay bribes to traffic police, transport authorities. "These thieves are our killers madam, if I can punish one of them who have harassed me for so long, I will be a happy man."

In the city of "breaking news" something significant did indeed happen today.