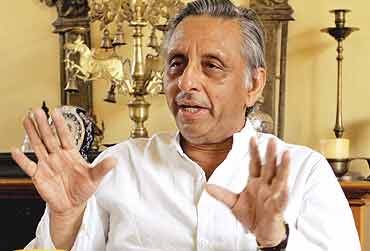 Nagendar Sharma: Has the world’s largest democracy been able to decentralise powers to the ground level by empowering the panchyati raj institutions?

Mani Shankar Aiyar: Well, the panchayati raj has been established in India , however the decentralisation of powers has not been complete. Let me give you some facts which are amazing – we have around 2,50,000 elected panchayats in the country, for which more than 32 lakh elected representatives are working. Out of these 12 lakh elected representatives are women. Now, the number of elected representatives in panchayati raj institutions is more than the population of Norway . There is a silent revolution taking place in rural India, very little is known about this is in urban India - neither the policy makers, nor the media or the opinion makers have paid attention to this revolution.

Listener from Mumbai: Mr Aiyar, it is no doubt nothing less than a revolution, but I have noted dome major weaknesses in the working of these institutions of grass root democracy – for example since financial powers have been given to panchayat pradhans, it has led to corruption and violence even leading to murders in some parts. Also the reservation for women in panchayats has merely led to dummy representatives. What does this show?

Mani Shankar Aiyar: It seems as if you and me do not live in the same country, as my experiences are totally different than yours. I have been to 15 states of the country so far to study the working of panchayati raj institutions in the country. I have been interacting with the elected representatives directly, right from the panch level to intermediate panchayat level – which are called by different names in different parts of the country – these are called union in Tamil Nadu and regional committees in some other states. Yes, some of the points raised by you are correct to an extent in some states, but it does not at all mean that this system is wrong – I do not agree with you.

Listener from Jharkhand: Sir, my question relates to the effectiveness of women as elected representatives. My experience is that either their husbands or their parents/guardians rule by proxy. The real transfer of power has not taken place. Is there is a way to fix this problem?

Mani Shankar Aiyar: If what you are saying were to be true, then, tell me, would it have been possible that where 33 percent seats were reserved for women in panchayats, the percentage of elected women representatives at the national level is 41 percent. A separate study on Karnataka shows that this percentage is between 44 and 47. Just have a look at your neighbouring state, Bihar, where chief minister Nitish Kumar in the recently held panchayat elections gave 50 percent reservation for women in panchayats. Therefore, I do not agree with the fundamentals of your question and yes please convince your state government to hold panchayat elections in your state.

Listener from Jharkhand continues: Sir that is precisely my next question to you – why does the centre not put pressure on state governments to hold panchayat elections? You can withhold the central grants to states which do not transfer power to the grass-roots...

Mani Shankar Aiyar: Well, Jharkhand is the only state of the country, where no panchayat elections has been held since it came into existence and the reason for this is that the matter is subjudice, it is pending in Ranchi High Court. The central government has submitted before the court that similar directions to that which were given by Patna High Court should be given here. Our plea is that elections be held and related matters should be solved in due course of time. Now so far as the question of money is concerned – please bear in mind that panchayats have very limited financial powers, we want them to increase their say in this matter. It is up to the state governments to see how the funds are utilised. So far as the centre is concerned, we are planning to change the way these funds are utilised.

Listener from Panchkula: Sir, I find there is a major flaw in the way panchayati raj institutions work, especially in cases where the elected representatives belong to weaker sections of the society. Is the government planning to change the way of training the panchayat representatives?

Mani Shankar Aiyar: It is very important to impart training to the elected representatives. I am dissatisfied with the way this has been happening in the last decade and a half. The use of modern technology is crucial in this purpose. We are going to make use of satellites for distant training purpose, which has been effectively used by Karnataka government. E-governance of the UPA government would also be used for this purpose. We are hopeful of getting international aid for the use of satellites in training panchayat representatives through the method of distance learning. This would also encourage state governments to show more progress on this front.

Listener from Bihar: Sir, you have said that panchayati raj institutions are effective, but what about the self-styled caste-based panchayats which have been functioning since centuries and passing diktats spreading poison in the society?

Mani Shankar Aiyar: There is no relation between the so-called Khap panchayats and the panchayati raj institutions set-up in accordance with the country’s constitution. I want that these Khap panchayats should not be allowed to use the name panchayat. The work of panchayati raj institutions is to ensure economic progress and social justice, therefore such illegal khap panchayats cannot be allowed to spread hatred in the name of caste and community. The law of the country and all legal enforcement agencies should come down hard on the inhuman activities of such traditional bodies which are poisoning the rural areas.

Nagendar Sharma: Is the centre planning to act in this matter?

Mani Shankar Aiyar: I would be taking up this matter with the union law ministry to find out the legal provisions which would enable us to put an end to such practices which are bringing disrepute to the panchayati raj institutions of the country. We would find out the ways under which the union government could act in this matter as at the moment we are not clear whether the centre could act on its own in this matter.

Listener from Orissa: Sir, whatever be the sincerity of central government in implementation of panchayati raj in the country, it has not reached the desired level even after six decades of independence. Why ?

Listener from Karnal: Mr Aiyar, the UPA government claims many steps have been taken for the betterment of rural India, why are these not visible till now?

Mani Shankar Aiyar: Well, it has taken 12 years to establish these institutions in the country, and it would take at least a decade to ensure their smooth functioning. I am willing to wait, I am not saying that we have a magic wand which would have panchayati raj up and running in a minute, but I am willing to wait as we are making progress and there would be results. The UPA government has given top priority to panchayats in major programmes such as National Rural Employment Guarantee Programme, Right to Information Act and National Rural Health Mission.

The Perils Of Talking Peace