In 1932, a young woman named Rashid Jahan was denounced by some clerics and threatened with disfigurement and death. A doctor by training like Taslima Nasreen, she too had written about seclusion, sexual oppression and female suffering in a patriarc

In 1932, a young woman named Rashid Jahan was denounced by some clerics and threatened with disfigurement and death. She and three others had just published a collection of Urdu short stories called Angarey in which they had robustly criticized obscurantist customs in their own community and the sexual hypocrisies of some feudal landowners and men of religion. The colonial state, always zealous in its support of authoritarian religious chauvinists over dissenting voices, promptly banned the book and confiscated all copies under Section 295A of the Indian Penal Code. Rashid Jahan, as a woman, became a particular focus of ire. A doctor by training like Taslima Nasreen, she too had written about seclusion, sexual oppression and female suffering in a patriarchal society.

What has changed in three quarters of a century? Periodically, we witness zealots of all faiths shouting hysterically about 'insults' to religious sentiments and being backed by the state while little is done to address more serious material injustices that affect members of their community. 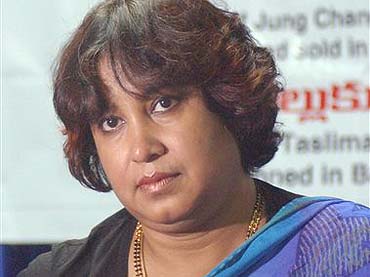 But in the light of the Taslima Nasreen controversy, the Angarey story has particularly ironic resonances. For Rashid Jahan and two of her co-contributors, Mahmuduzzafar and Sajjad Zaheer, were members of the Communist Party of India who would go on to help found the Progressive Writers Association (PWA) in 1936. The PWA was to be a loose coalition of radical litterateurs, both party members and 'fellow travelers', who would challenge all manner of orthodoxies and put social transformation on the literary map of India. Unsurprisingly, many PWA-linked writers had run-ins with the law, constantly fending off charges of obscenity, blasphemy and disturbing the peace. Challenging these attacks with brave eloquence, they defended the task of the writer as one of pushing social and imaginative boundaries. The then beleaguered undivided CPI too faced constant attacks, including censorship, trials and an outright ban.

Today, heirs of that same Communist party, the CPI(M), find themselves on the same side with the state and religious orthodoxies whose excesses they once challenged. Their actions shore up anti-democratic authoritarianism, whether this takes the form of corporate land-grabbing, the suppression of popular protest, or religious chauvinism. In response to criticism from progressive quarters, they invoke the subterfuge of 'left unity' which forbids criticism because this will provide grist for the opposition's mills. A pro-CPI(M) statement signed by the likes of Noam Chomsky and Tariq Ali (with, one can only presume, the airy historical carelessness that even the best intellectuals in the West are sometimes prone to) warns against 'splitting the left'. With the unmistakable timbre of a Party pamphlet, it goes on to suggest that all is now well in Nandigram and 'reconciliation' with the dispossessed is fast being effected. (How do they know?). Meanwhile, many CPI(M) leaders parrot the conservative statist line that Taslima is free to stay in India if she behaves herself and refrains from 'hurting religious sentiments'. But those oppressed by religious orthodoxies, like women and Dalits, often have no choice but to speak of how those very sentiments are used against them.

Although laden with irony, this sorry state of affairs is not an altogether unexpected development in the cultural history of the official left in India even if it is less shocking than the thuggish assistance provided to big global corporations in Singur and Nandigram by the leaders of the proletariat. As the PWA gained strength and became one of the most influential cultural movements of its day, a rift developed between increasingly authoritarian Party members like Sajjad Zaheer and writers like the doughty Ismat Chughtai and maverick, Saadat Hasan Manto, neither of whom would ever agree to have their imagination and critique constrained by a party line. 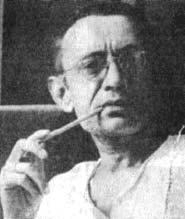 Both Chughtai and Manto insisted on intellectual independence and the continuing need to address gender and sexuality, subjects which the Party began to frown upon. Accordingly, they found themselves attacked not only by the state but also by hardliners in the PWA who dutifully denounced the 'perversions' of writing about the body and its desires as well as prostitution and sexual violence. Justifiably annoyed, Manto (who fought five cases on 'obscenity' charges) wrote an essay sharply titled 'Taraqqi-Pasand Socha Nahin Karte' [Progressives Don't Think] in which he deplored the unthinking adherence to prudish literary categories which allowed him and others to be denounced as 'individualists' and 'pornographers.' 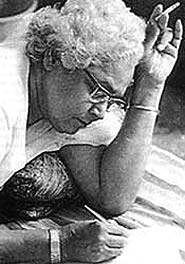 Of obscenity charges Chughtai asks: 'Don't you see that the writer himself is trembling fearfully and is terrified of the world's obscenity? All he's doing is converting events that are taking place in the world into words.'

Today, this unwillingness to examine received ideas emerges in party leader Sitaram Yechury's firm endorsement of 'certain conditions' on Taslima if she is to stay, including 'refraining from…activities and expressions that may hurt the sentiments of our people', whatever 'our' means in a remarkably heterogeneous society that can take pride in allowing dissent. The obviously opportunistic attack from the BJP allows more relevant criticism of the CPI(M) from progressive people and the broad, non-party left to be ignored, all of it thrown into the same basket of 'belittling…the present-influence of the Left in the country.' Used in this self-exculpatory way, 'anti-communist prejudice' is no more meaningful a mantra than 'anti-American' enabling all criticism to be dismissed as malicious. This denigrates not only those on the left who are unwilling to countenance the CPI(M)'s recent betrayals of humane values and social justice goals, but also older communists like Rashid Jahan who came under vicious attack precisely for speaking their mind against injustices, including those inflicted by religion. However much we may deplore the BJP's obvious hypocrisies in denouncing 'pseudo-secularism', the fact remains that the actions of the CPI(M) serve to undermine the credibility of those who have stood up more consistently for pluralism and secularism. Moreover, the depredations of the right-wing should not serve as an alibi for misconduct by those who rightly oppose them.

These are difficult times for progressive people who are aware of the ways in which Islam and Muslims are under siege both from Hindu majoritarianism and Bush's 'War on Terror'. Confronted with a similar colonial situation and accused of betraying their community, Rashid Jahan and her comrades maintained that criticism and self-criticism could not be shunted aside in the name of battling a greater enemy; the two are not mutually exclusive. Mahmuduzzafar, another communist and contributor to Angarey, refused to apologise for the book and wrote that he and his co-authors, all Muslim, chose Islam 'not because they bear it any 'special' malice, but because, being born into that particular society, they felt themselves better qualified to speak for that alone.' Taslima Nasreen is exercising a similar privilege. There's an odd kind of condescension in maintaining that some sentiments are more fragile than others and that some forms of belief are less resilient and, therefore, beyond questioning. Critique and dissent are essential, particularly when they come from those most affected by particular forms of religious and political practice.

When CPI(M) leaders commend the withdrawal of passages from Taslima's book and insist on the objectionable nature of some of her writing, they would do well do remember that a good many people in this world claim to find communism profoundly objectionable, even deeply offensive to their most cherished sentiments. The right of the left more generally to articulate critique and opposition has been hard won and remains under siege in many parts of the world.

India needs nothing more than a genuine and strong left. But this will not be forged by dishonouring one's own more radical past, covering up mistakes and rewriting recent history. In a second, modified statement, Chomsky et al have qualified their support for the CPI(M) and indicate that they were simply exhorting the left in India to 'unite and focus on the more fundamental issues that confront the Left as a whole'. In theory, this is a goal devoutly to be wished for. And yet, it is not one that can be accomplished at the cost of self-criticism and silence. We can do no better than to follow the principle always advocated by the late Edward Said, a left intellectual and activist of the highest integrity in these matters: 'Never solidarity before criticism.' It is only in so doing so that we honour the history of genuinely oppositional movements in India and elsewhere.

Priyamvada Gopal, the author of Literary Radicalism in India, is Senior Lecturer of English, University of Cambridge