Home  »  Website  »  International  »  US Violence: One Dead in Indianapolis As Protests Over George Floyd's Death Rage In US Cities

US Violence: One Dead in Indianapolis As Protests Over George Floyd's Death Rage In US Cities

In New York, thousands of protesters took to the streets to demonstrate against Floyd's killing of by a white police officer, setting police vehicles on fire in some areas and several people being arrested through the day. 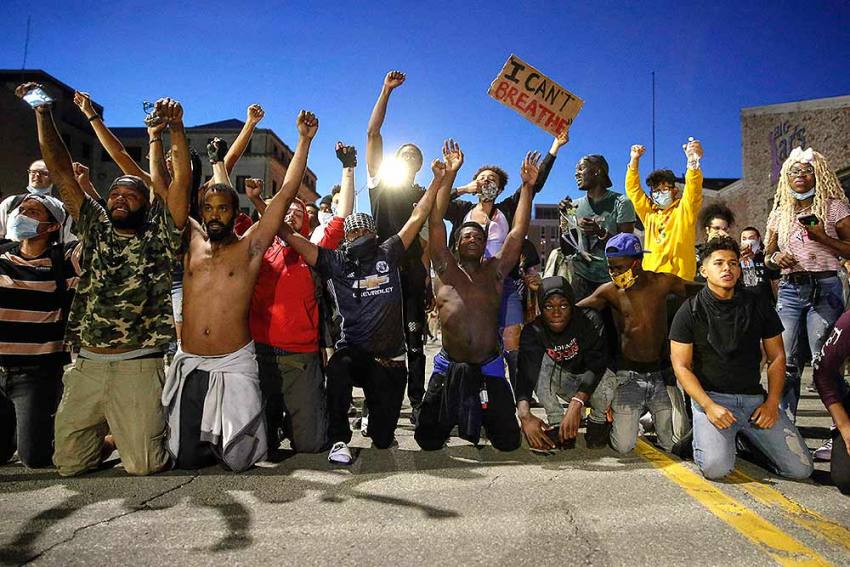 Protesters take their knees on 2nd Street during a protest in Des Moines. Protests have been erupting all over the country after George Floyd died earlier this week in police custody in Minneapolis.
AP Photo.
Agencies May 31, 2020 00:00 IST US Violence: One Dead in Indianapolis As Protests Over George Floyd's Death Rage In US Cities 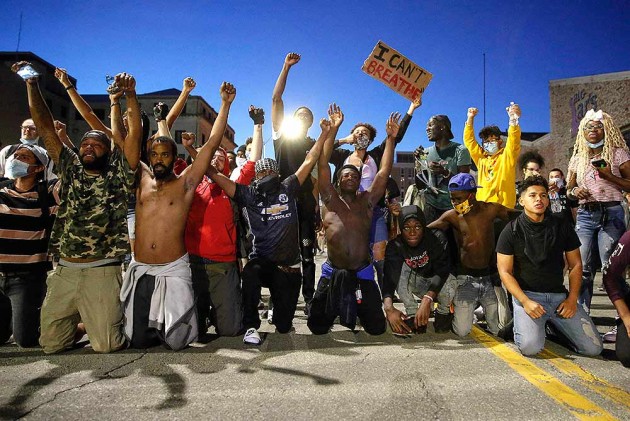 Tense protests over the death of George Floyd and other police killings of black people grew Saturday from New York to Tulsa to Los Angeles, with police cars set ablaze and reports of injuries mounting on all sides as the country convulsed through another night of unrest after months of coronavirus lockdowns.

The protests, which began in Minneapolis following Floyd's death Monday after a police officer pressed a knee on his neck until he stopped breathing, have left parts of the city a grid of broken windows, burned-out buildings and ransacked stores. The unrest has since become a national phenomenon as protesters decry years of deaths at police hands.

Tens of thousands of people were in the streets across the country, many of them not wearing masks or observing social distancing, raising concerns among health experts about the potential for spreading the coronavirus pandemic at a time when much of the country is in the process of reopening society and the economy.

After a tumultuous Friday, racially diverse crowds held mostly peaceful demonstrations in dozens of cities, though many later descended into violence as had happened the previous night.

In Indianapolis, police were investigating “multiple shootings” downtown, including one that left a person dead, amid the protests. Police gave few details but said no officers were involved.

In Washington, the National Guard was deployed outside the White House, where chanting crowds taunted law enforcement officers. Dressed in camouflage and holding shields, the troops stood in a tight line a few yards from the crowd, preventing them from pushing forward.

In Philadelphia, at least 13 officers were injured when peaceful protests turned violent and at least four police vehicles were set on fire. Other fires were set throughout downtown.

In Salt Lake City, protesters defied a curfew and National Guard troops were deployed by Utah's governor. Demonstrators flipped a police car and lit it on fire, and another vehicle was later set ablaze. Police said six people were arrested and a police officer was injured after being struck in the head with a baseball bat.

In Los Angeles, protesters chanted “Black Lives Matter,” some within inches of the face shields of officers. Police used batons to move the crowd back and fired rubber bullets. A graffiti-covered police car burned in the street.

And in New York City, dangerous confrontations flared repeatedly as officers made arrests and cleared streets. A video showed two NYPD cruisers lurching into a crowd of demonstrators who were pushing a barricade against one of them and pelting it with objects. Several people were knocked to the ground, and it was unclear if anyone was hurt.

Not all protests devolved into violence. In Juneau, Alaska, law enforcement officers joined elected officials and residents at a peaceful protest in front of a giant whale sculpture on the city's waterfront.

Back in Minneapolis, the city where the protests began, police, state troopers and National Guard members moved in soon after an 8 p.m. curfew took effect to break up protests, firing tear gas and rubber bullets to clear streets outside a police precinct and elsewhere.

The show of force came after three days when police largely avoided engaging protesters, and after the state poured in more than 4,000 National Guard troops to Minneapolis and said the number would soon rise to nearly 11,000.

Trump appeared to cheer on the tougher tactics Saturday night, commending the Guard deployment in Minneapolis, declaring “No games!” and saying police in New York City “must be allowed to do their job!” Presumptive Democratic presidential nominee Joe Biden condemned the violence as he continued to express common cause with those demonstrating after Floyd's death.

“The act of protesting should never be allowed to overshadow the reason we protest,” Biden said in a statement Saturday night.

Overnight curfews were imposed in more than a dozen major cities nationwide, including Atlanta, Denver, Los Angeles, Minneapolis and Seattle.

More than 1,300 people have been arrested in 16 cities since Thursday, including over 500 Friday in Los Angeles.

The unrest comes at a time when most Americans have spent months inside over concerns surrounding the coronavirus, which the president has called an “invisible enemy.” The events of the last 72 hours, seen live on national television, have shown the opposite: a sudden pivot to crowds, screaming protesters and burning buildings, and a stark contrast to the empty streets of recent months.

This week's unrest recalled the riots in Los Angeles nearly 30 years ago after the acquittal of the white police officers who beat Rodney King, a black motorist who had led them on a high-speed chase.

The protests of Floyd's killing have gripped many more cities, but the losses in Minneapolis have yet to approach the staggering totals Los Angeles saw during five days of rioting in 1992, when more than 60 people died, 2,000-plus were injured and thousands arrested, with property damage topping $1 billion.