Daily new Covid-19 cases have plummeted from a mid-August peak of nearly 6,000 in Tokyo, with caseloads in the densely populated capital now routinely below 100, an 11-month low. 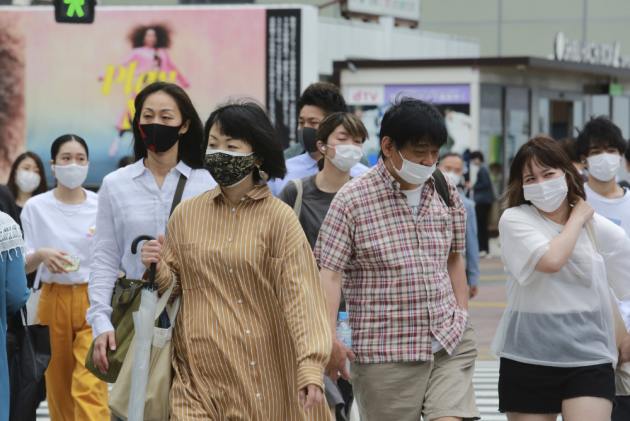 Daily new Covid-19 cases have plummeted from a mid-August peak of nearly 6,000 in Tokyo, with caseloads in the densely populated capital now routinely below 100, an 11-month low.

The bars are packed, the trains are crowded, and the mood is celebratory, despite a general bafflement over what, exactly, is behind the sharp drop.

Japan To Extend Virus Emergency Until End Of Month

Japan, unlike other places in Europe and Asia, has never had anything close to a lockdown, just a series of relatively toothless states of emergency.

Some possible factors in Japan's success include a belated but remarkably rapid vaccination campaign, an emptying out of many nightlife areas as fears spread during the recent surge in cases, a widespread practice, well before the pandemic, of wearing masks and bad weather in late August that kept people home.

But with vaccine efficacy gradually waning and winter approaching, experts worry that without knowing what exactly why cases have dropped so drastically, Japan could face another wave like this summer, when hospitals overflowed with serious cases and deaths soared — though the numbers were lower than pre-vaccination levels.

Many credit the vaccination campaign, especially among younger people, for bringing infections down. Nearly 70 percent of the population is fully vaccinated.

“Rapid and intensive vaccinations in Japan among those younger than 64 might have created a temporary condition similar to herd-immunity,” said Dr. Kazuhiro Tateda, a Toho University professor of virology.

Tateda noted that vaccination rates surged in July to September, just as the more infectious delta variant was spreading fast.

He cautioned, however, that breakthrough infections in the US, Britain and other places where inoculations began months earlier than in Japan show that vaccines alone are not perfect and efficacy gradually wears off.

Japan's vaccinations started in mid-February, with health workers and the elderly first in line.

Shortages of imported vaccines kept progress slow until late May, when the supply stabilised and daily inoculation targets were raised to above 1 million doses to maximise protection before the July 23-Aug. 8 Olympics.

The number of daily shots rose to about 1.5 million in July, pushing vaccination rates from 15 per cent in early July to 65 per cent by early October, exceeding the 57 per cent of the United States.

Daily new cases surged just weeks ahead of the Olympics, forcing Japan to hold the Games with daily caseloads of more than 5,000 in Tokyo and around 20,000 nationwide in early August.

Tokyo reported 40 cases Sunday, below 100 for the ninth straight day and lowest this year.

Nationwide, Japan reported 429 cases Sunday for an accumulated total of about 1.71 million and 18,000 deaths since the pandemic began early last year.

So why the drop?

“It's a tough question, and we have to consider the effect of the vaccinations progress, which is extremely big,” said Disease Control and Prevention Centre Director Norio Ohmagari.

“At the same time, people who gather in high-risk environments, such as crowded and less-ventilated places, may have been already infected and acquired natural immunity by now.”

Though some speculated that the drop in cases might be due to less testing, Tokyo metropolitan government data showed the positivity rate fell from 25 per cent in late August to 1 per cent in mid-October, while the number of tests fell by one-third. Masataka Inokuchi, the Tokyo Medical Association deputy chief, said falling positivity rates show infections have slowed.

Japan's state of emergency measures were not lockdowns but requests that focused mainly on bars and eateries, which were asked to close early and not serve alcohol.

Many people continued to commute on crowded trains, and attended sports and cultural events at stadiums with some social distancing controls.

The emergency requests have ended and the government is gradually expanding social and economic activity while allowing athletic events and package tours on a trial basis using vaccination certificates and increased testing.

Kyoto University professor Hiroshi Nishiura told a recent government advisory board meeting that he estimates vaccinations helped some 650,000 people avoid infection and saved more than 7,200 lives between March and September.

Many experts initially blamed younger people, seen drinking on the streets and in parks when the bars were closed, for spreading the virus, but said data showed many in their 40s and 50s also frequented nightlife districts. Most serious cases and deaths were among unvaccinated people in their 50s or younger.

Takaji Wakita, director of the National Institute of Infectious Diseases, told reporters recently he is worried people have already resumed partying in nightlife districts, noting that the slowing of infections may have already hit bottom.

"Looking ahead, it is important to further push down the caseloads in case of a future resurgence of infections," Wakita said Thursday.

On Friday, new Prime Minister Fumio Kishida said a preparedness plan to be compiled by early November would include tougher limits on activities and require hospitals to provide more beds and staff for COVID-19 treatment in case infections soar in a “worst-case scenario.”

He did not elaborate on details.

Many people are cautious about letting down their guard, regardless of the numbers.

“I don't want to get close to those who don't wear masks,” said her friend, Alice Kawaguchi.

Public health experts want a comprehensive investigation into why infections have dropped off.

An analysis of GPS data showed that people's movements in major downtown entertainment districts fell during the most recent, third state of emergency, which ended Sept. 30.

“I believe the decrease of people visiting entertainment districts, along with the vaccination progress, has contributed to the decline of infections,” said Atsushi Nishida, the director of the Research Centre for Social Science & Medicine Sciences at the Tokyo Metropolitan Institute of Medical Science.

But people headed back to entertainment districts as soon as the recent emergency ended, he said, and that may “affect the infection situation in coming weeks.”