While Pakistan "continues to be a safe haven for terrorists", further strengthening of the destabilizing military-mullah combine can only compound the vulnerabilities of the Sharif government. 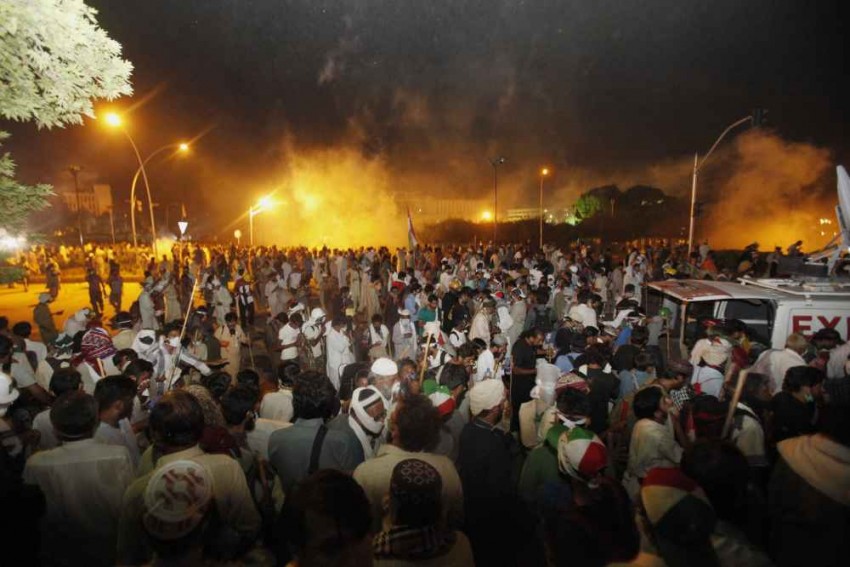 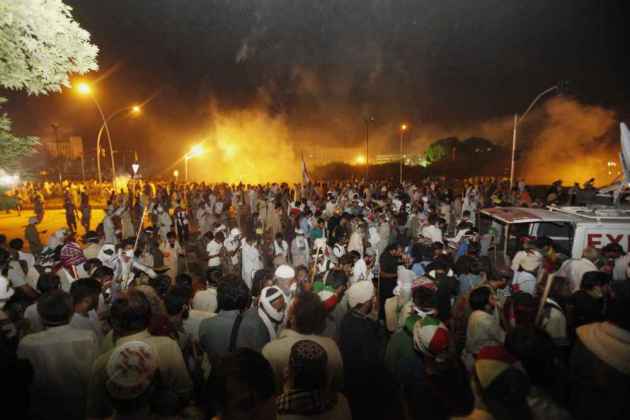 At least three people have been killed and more than 550 have been injured in violent clashes between security forces (SFs) and the protesters. Crucially, Parliament has been attacked; the headquarters of the national television channel, PTV, were occupied by demonstrators; and attempts were made to barge into Prime Minister Nawaz Sharif's house, as a result of which he was forced to move to Lahore.

The chaotic situation has led to the cancellation of Chinese President Xi Jinping's maiden visit to Pakistan. Several other world dignitaries, including Presidents of Sri Lanka and the Maldives, have cancelled their visit to the country, as Islamabad remains virtually under siege.

On June 27, 2014, Imran Khan had called for a protest march, the 'Tsunami March', from Lahore to Islamabad, to commence on August 14, 2014, Pakistan's Independence Day. Later the March was renamed the Azadi (Freedom) March. Meanwhile, soon after Khan's announcement, Qadri called for a similar protest, the 'Inqilab (Revolution) March'. The two parties subsequently agreed to combine their protest, and the march began from Khan's residence at Zaman Park in Lahore at about 12:30pm on August 14, and arrived at the 'Red Zone' in Islamabad on August 16. The protests intensified on August 30, when hundreds of protesters broke the fence around Parliament and entered the building. Many protesters also marched towards PM Sharif's residence, resulting in clashes between the Government Forces and the protesters, with three protestors consequently killed.

Addressing the participants of the Freedom March in the night of August 20, 2014, Imran Khan announced six demands, the foremost being the resignation of the Prime Minister. Earlier, on August 16, 2014, Qadri had put forward a 36-point charter of demands, again emphasising Sharif's resignation.

It is widely believed that the crisis is the creation of the all powerful Army. Indeed, Javed Hashmi, claiming that he is still the President of PTI (he was dismissed by Imran Khan on August 31, 2014) revealed on September 1, 2014, that Imran Khan had stated, 'we can't move forward without the Army': "Imran Khan also said that all the matters had been decided and there will be elections in September." Hashmi added, further, that it appeared as if everything had been planned in advance. Later, in an interview with Hamid Mir on September 3, 2014, Hashmi claimed Imran Khan had travelled to London and held a meeting with Qadri, and that there were discussions within PTI that former Inter Services Intelligence (ISI) chief Lt. General Shuja Pasha was 'active' in Lahore.

Confirming the Army's role, an unnamed senior leader of Sharif's party stated, "The Prime Minister is paying a price for demanding General Musharraf's prosecution." Significantly, Chief of Army Staff (COAS) General Raheel Sharif had said on April 7, 2014, that the Army respects all the institutions of the country, but will preserve its own dignity and institutional pride at all costs. The Army Chief was addressing officers at the Special Services Group (SSG) headquarters in Tarbela when he made these remarks in response to soldiers' concerns over "undue criticism of the [Army] in recent days." The 'criticism' is most likely related to the treason trial of former Army Chief and President General (Retd.) Pervez Musharraf. It was earlier reported that General Raheel had advised the Government to let Musharraf go abroad for his medical treatment and to look after his ailing mother.

On the other hand, the Sharif government has been vigorously pushing its efforts to prosecute Musharraf for 'high treason', among other charges. The Federal government had levelled five charges against Musharraf, praying to the Special Court to award the former military ruler the death penalty or life imprisonment, setting the stage for a major potential confrontation between the civilian government and the Army. In the month of March, a special court indicted Musharraf on five counts of treason over his suspension of the Constitution and imposition of emergency rule in 2007, when the General was trying to extend his rule. Musharraf's indictment has broken an unwritten rule that the top ranks of the military are untouchable. He has pleaded not guilty and faces the death penalty if convicted.

The Army and the civilian government were at odds also on the issue of continuation of peace talks with the Tehreek-e-Taliban Pakistan (TTP). Nawaz Sharif, who had won the May 2013 General Elections on a promise to hold talks with TTP terrorists as part of a broader settlement, and had initiated a dialogue with TTP through a panel of representatives in January 29, 2014, had asserted, during a meeting with General Raheel Sharif on January 28, 2014, that no decision on launching an offensive in the North Waziristan Agency (NWA) of the Federally Administered Tribal Areas (FATA) could be taken without consensus among 'all stakeholders', and that any such decision must be in the best 'national interest'. On the other hand, the Army, always reluctant to initiate any operations against the many cross-border terrorist groups in NWA because of their long association with the ISI and their potential as "strategic assets", both in the country's expansionist campaigns in Afghanistan, and in Indian Jammu & Kashmir, was eater to carry out targeted operations against the TTP, which was attacking military establishments and killing its personnel, despite engaging in talks with the Government. Unsurprisingly, the Prime Minister was forced to authorize the military to launch an operations in the region barely a month after his meeting with General Sharif. Significantly, the military strikes were in retaliation against the February 16, 2014, announcement by the Mohmand chapter of the TTP, that it had executed 23 Frontier Corps (FC) personnel, allegedly as revenge for the killing of its fighters in custody in several parts of the country. The FC personnel had been abducted in June 14, 2010, from the Shoonkri Post of Mohmand Agency. The talks finally collapsed. Meanwhile, the targeted operation also ended very soon, only to re-start on June 15 in the name of Operation Zarb-e-Azb [Sword of the Prophet].

Again, when top Pakistani journalist Hamid Mir (47) was attacked on April 19, 2014, and his brother and head of Geo TV channel, Amir Mir accused the ISI of engineering the assassination attempt, Nawaz Sharif visited Hamid Mir in hospital, in an initial show of solidarity, and promised that a judicial commission, comprising three Supreme Court judges, would investigate the attack and announce its findings within three weeks. However, the Army's pressure tactics soon came to the fore, and the Prime Minister, was forced to praise the ISI for "ensuring protection and defence of the country". The judicial commission was subsequently appointed on April 21, but is yet to complete its inquiries.

The orchestrated crisis has provided the Army an opportunity to settle scores with the Sharif Government. Indeed, the PM was forced to seek the Army's help in sorting out the crisis. On August 29, 2014, Major General Asim Bajwa tweeted, "COAS (Chief of Army Staff) was asked by the Government to play facilitative role for resolution of current impasse, in August 28's meeting, at PM house." Earlier on the same day, responding to the allegations leveled by PTI and PAT that the Government has asked for Army's intervention in the crisis, Sharif had told the National Assembly, "Neither had I asked Army nor the armed forces sought a role in the present political crisis," and alleged it was Khan and Qadri who approached Army Chief Raheel Sharif to mediate. The Army's quick refutation was to prevent Sharif from positioning himself as a champion of democracy, as well as to reiterate its position as the supreme power in Islamabad.

On the night of August 28, 2014, Army Chief Raheel Sharif took up the role of mediator between the government and the PTI and PAT, following his meeting with the Nawaz Sharif at the PM's residence. He held two separate meetings with Imran Khan and Qadri. Worryingly, however, the protests intensified thereafter. What really transpired between the protesting leaders and the COAS can, consequently, be surmised.

Not surprisingly, the beleaguered Nawaz Sharif, seeking support of all political parties in Parliament, on September 5, 2014, pleaded,

I hope the opposition will continue on its path of supporting the government. I assure you that if it was the PPP [Pakistan People's Party] government instead of PML-N's [Pakistan Muslim League-Nawaz] and we were in the opposition, we would have stuck by the PPP. There should be no compromise over that unity... over the supremacy of Constitution, democracy and rule of law... all parties should set that example.

He went on to add,

" It was the opposition which urged me not to resign... I do not care for power... being the Prime Minister of Pakistan, governing Pakistan is not easy. And even though we are talking to the Opposition, if you look at the issues of those parties (PTI, PAT), you will wonder if these are the issues of Pakistan.

The PM was addressing the emergency joint session of the Parliament convened to support the Premier and discuss the over three week-long crisis.

While the Army has forced PM Sharif to realize his fragility in the corridors of power, the terrorists have also challenged his authority. Tehreek-e-Taliban Pakistan (TTP) chief, Maulana Fazlullah, on August 31, 2014, warned,

"About 30,000 people have besieged the capital of Pakistan for the last two weeks and the Government is unable to deal with them. Taliban fighters could easily seize the Parliament House as our numbers are far bigger than these people and we are well-equipped with sophisticated arms."

Worryingly, federal interior minister Chaudhry Nisar Ali Khan on September 2, 2014, told Parliament that nearly 1,500 trained militants, belonging to terrorist outfits, were among the participants of the sit-INS organized by the PTI and PAT. Though he did not name the terrorist group, he pointed out, "They are armed with axes, wooden batons, nails, hammers, cutters and slingshots. This is not protest but rebellion against the State of Pakistan."

This orchestrated political drama also appears to be the Army's attempt to shift attention from the much publicized operation Zarb-e-Azb that was launched on June 15, 2014, to eliminate terrorists from the NWA of FATA. During more than two and half months of the operation, no significant gain has been made in the region. Though a press release by the Inter-Services Public Relations (ISPR) on September 3, 2014, asserted that 910 'militants' had been killed in the operation, and that that the SFs had cleared five towns, including Miranshah, Mir Ali, Dattakhel, Boya and Degan, this has limited credibility, given past records of superficial and exaggerated claims of the Pakistani Forces. Significantly, the Jamaat al-Ahrar, a new faction of the TTP, has claimed that only 30 fighters had thus far been killed in operation Zarb-e-Azb, and that the SFs' claim of killing 910 militants was baseless and unfounded. He alleged the Pakistan media had been presenting one-sided reports to the people without confirming these from independent sources. The allegation is implausible, since the media in Pakistan operates under the shadow of death.

With the Pentagon reasserting the fact that Pakistan "continues to be a safe haven for terrorists", the further strengthening of the destabilizing military-mullah combine can only compound the vulnerabilities of the Sharif government. It remains to be seen how long Sharif is able to endure the pressure and defy the inevitable.