As the peace-process becomes a mockery, perhaps time to ask: Is Nagaland heading back to the days of continuous fratricidal wars between the 'national workers' out to restore all that was wonderful in the state before 'India' decided to 'plunder and 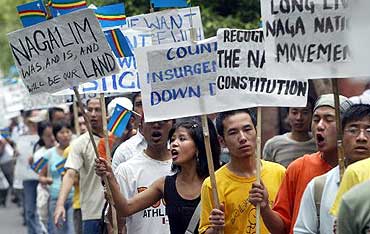 Another round to talks between the union government and the National Socialist Council of Nagaland – Isak-Muivah (NSCN-IM) concluded at The Hague on June 25, 2006. The usual statements regarding the talks being "quite good and very fruitful", were made by union minister Oscar Fernandes after three days of talks with the insurgent leaders, along with union minister of state for home, S. Reghupathy, and minister of state at the Prime Minister’s Office, Prithviraj Chouhan. Fernandes, Reghupathy and Chouhan are members of the Group of Ministers (GoM) constituted by Prime Minister Dr. Manmohan Singh to look into the long drawn Naga peace process. The interlocutor for the Naga talks, K. Padmanabhiah, was also present at the meeting. Chairman Isak Chishi Swu and General Secretary Thuingaleng Muivah represented the NSCN-IM. The  government began talks with the NSCN-IM in 1997 after the two sides agreed to a cease-fire.

However, the ground situation continues to cause serious concern, raising the crucial question: is Nagaland heading back to the days of continuous fratricidal wars between the ‘national workers’ out to restore all that was wonderful in the state before ‘India’ decided to ‘plunder and subjugate’? The question hangs heavy in the wake of the recent escalation in violent clashes between two rival National Socialist Council of Nagaland (NSCN) factions. The clashes appear to indicate that the cease-fire agreements signed between the union government and separately with the NSCN-Isak-Muivah (IM) faction in 1997, and the Khaplang faction in 2001, are being violated at will. Worse, efforts to end the abiding and violent confrontation have had no visible impact on the warring factions.

The May 19, 2006, killing of the NSCN-K ‘Education Kilonser’ (minister), Ngampan Konyak, by the rival NSCN-IM at Mon provoked the NSCN-K to launch a campaign codenamed, "Operation Blueland", under which it has stepped up attacks against the IM group. On the other side, the IM faction also alerted its armed cadres to reinforce their dominance in different parts of the state. As rebel factions, both claiming to represent the wishes and aspirations of the Nagas, build up their manpower and resources for future mutual carnage, the common people in remote and interior locales, are increasingly worried.

Although the ceasefires with the union government still hold formally, escalating violence, large-scale extortion and intimidation put a question mark on the very arrangement that supposedly prohibits the movement of armed cadres, armed violence, intimidation and disturbance to peace that are, in fact, endemic. According to the ceasefire agreements, the cadres of each faction are to remain confined to their respective designated camps, but the rule if flouted more often than it is kept. Indeed, the ceasefire has been exploited by militant groups to consolidate and expand. Since the NSCN-IM entered into its formal ceasefire in 1997, it has reportedly raised its cadre strength from 3,000 to 5,000 and nearly doubled its weapon holdings.

Factional violence continues at regular intervals as both groups vie to augment their territorial supremacy. In a statement made available to the local media on May 31, 2006, senior NSCN-K leader A.Z. Jami threatened to take control of Dimapur, Nagaland’s commercial hub, known to be a stronghold of the rival NSCN-IM. Jami declared: "We will certainly take over Dimapur. Our cadres are all over the town, waiting for the opportunity to strike." Alarmed, the NSCN-IM responded that it would never compromise with such a threat "by anti-nationalist like A.Z. Jami." A release issued by NSCN-IM’s ‘Secretary, Union Territory - I’, Romeo Sankhil, asserted that his outfit was "well prepared to meet any eventuality at any cost to protect the Naga peoples in general and Dimapurian (sic) in particular and also the ongoing peace process." The release further added that the NSCN-IM had already intensified its vigil and deployed its men across Dimapur to meet any eventuality. The desperation of both the factions is perfectly understandable. Dimapur is a flourishing commercial town – the largest and the only one in Nagaland – promising enormous profits to whoever controls it.

It is significant that, between 2002 and 2005 – a period during which both factions of the NSCN were party to a ceasefire - 171 persons have been killed in militancy related violence in the state, of which 113 (66.08 per cent) were militants, 52 (30.40 per cent) were civilians and the rest 6 (3.50 per cent) were security force SF personnel. With rare exception, most militant deaths have been the result of factional clashes. 2004 saw at least 17 factional clashes, while 2005 witnessed another 14. 2006 has already seen 27 such incidents, (till June 25) in which at least 28 militants have been killed (14 of the NSCN-IM, 10 of the NSCN-K and two of the Naga National Council (NNC), and two unidentified). There is no available record of the numbers of injured.

Some of the significant incidents in just the last month and a half include:

June 18: NSCN-K ‘awarded’ capital punishment to one, Wanpa, at Nangtan under Tizit Assembly Constituency for his alleged role in the assassination of its ‘Education Minister’, Ngampan Konyak, in the Mon district on May 18.

June 14:   Clashes broke out between cadres of NSCN-IM and NSCN-K at Khukiye and Chisholi in Nagaland. Unidentified gunmen shot dead one NSCN-IM cadre, Yangthsase Sangtam at Longkhim in the Tuensang District.

June 8: A factional clash occurred between cadres of the NSCN-IM and the NSCN-K at Naga Ching in the Tamenglong district.

June 7: Two civilians were wounded when firing broke out between cadres of the NSCN-IM and the Federal government of Nagaland of the Naga National Council (NNC) at Chosaba village in the Phek District.

May 30: Two NSCN-IM cadres were seriously wounded in a clash with rival NSCN-K at Lochomi village in the Zunheboto District.

May 27: NSCN-K claimed to have killed two rival NSCN-IM cadres and injured two others in an encounter at a place near Longleng in the Tuensang District.

May 24: NSCN-K killed two NSCN-IM cadres while three others were abducted in different raids against rival camps in the Zunheboto district. They were said to have been released subsequently on May 30.

May 19: NSCN-IM killed the ‘education kilonser’ (minister) of the NSCN-K, Nampang Konyak at his home at Mon in Nagaland.

May 16: Two NSCN-IM cadres were killed while unspecified number of NSCN-K cadres were wounded in a factional clash between cadres of the rival groups at Athibung in the Peren district.

May 6: In a factional clash, two NSCN-K militants were killed while three others sustained injuries in a pre-dawn attack by NSCN-IM cadres at Old Phek village in the Phek district.

The impact of this unending friction on the lives of the common people is enormous. The Chakhesang Public Organisation, an apex body of the Chakhesang tribe, on March 7, 2006, made a declaration prohibiting extortion, movement of cadres in combatant uniform and the establishment of militants camps within the periphery of the tribe’s habitation. Again, on April 17, 2006, several Phek-based organizations under the banner of Phek Area Public Organisation (PAPO) urged the state government to take up the issue of factional clashes with the rival outfits and the Union government, and to ensure that cadres belonging to the two rival factions move out of the Phek and the Chakhesang areas. A Press Release issued by PAPO stated: Ninety per cent of our people are agriculturists, who depend on agriculture for their survival. Although March and April is a time for sowing seeds, yet the villagers are afraid of going to the fields for fear of being mingled in cross fire." The gathering also condemned the unabated illegal ‘tax collection’ imposed by the militant groups.

The Chakhesang Baptist Church Council (CBCC) at a meeting held at Pfutsero in the Phek District on May 11 and 12, 2006, said that, in Phek district, innocent citizens had suffered because of threats, intimidation, extortion, and forced taxation imposed by the various militant groups. The church body alleged that the armed factions had forcibly occupied a number of private houses and educational institutions in the District. The meeting described the existing ceasefire with the Union government as a "public mockery".

The state government, often described as soft on the militants – especially the NSCN-IM – tends to surrender to their caprice. Nagaland Chief Minister Neiphiu Rio, while presenting the state budget in the legislative assembly in capital Kohima on March 20, 2006, stated: "It is not possible for any government to prevent this (extortion) completely." The hapless Chief Minister termed the factional killings "mindless and senseless", but has displayed little intent or capacity to do anything about them, and all past attempts to contain the factional feud have remained subservient to short-term political calculations. In March 2003, the ruling Democratic Alliance of Nagaland (DAN) coalition government formed a ‘Consultative Committee for Peace’ comprising various political parties and major non-governmental organisations. However, the opposition Congress party, known to be sympathetic to the NSCN-K, was not included in the committee. As a result, the committee remained a partisan and useless jamboree.

Since the 1990s, the church and the Naga Hoho (the apex tribal council of Nagaland) have been attempting to bring all warring underground factions together through a ‘reconciliation process’, but their efforts have proven futile. The NSCN-K has accused the Naga Hoho, the Naga Students’ Federation (NSF), the Nagaland People’s Movement for Human Right (NPMHR), the Naga Mothers Association (NMA) and even the ruling Democratic Alliance of Nagaland (DAN) government of a pro-NSCN-IM stance. On May 29, 2006, the NSCN-K on accused Chief Minister Rio of providing security to NSCN-IM cadres at Dimapur and Zunheboto. The Chairman of the NSCN-K Ceasefire Supervisory Board, Kughalu Mulatonu, had alleged that the Chief Minister dispatched security personnel belonging to the Indian Reserve Battalion to protect the NSCN-IM cadres.

There appear to be no principled and non-discriminatory efforts to contain the factional violence in Nagaland, and the militant groups remain a law unto themselves, immune to any suggestions or corrective measures. Under the circumstances, and in view of the enormous suffering continuously being inflicted on innocent civilians, it is time the centre reviewed its ‘hands off’ policy and made a proper assessment of the anarchy on the ground that its deals with the insurgent outfits have yielded. The conditions of the government’s ceasefire with the NSCN factions have been clearly defined, and they cannot be allowed to be habitually violated with impunity.