'The Magic Of The Human Spirit And Of A Nation's Passion'

A victory for gay rights as Delhi HIgh Court holds: 'We declare that Section 377 IPC, insofar as it criminalises consensual sexual acts of adults in private, is violative of Articles 21, 14 and 15 of the Constitution' 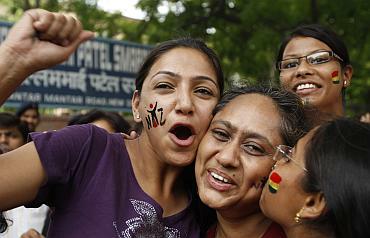 In a path-breaking judgement, the Delhi High Court has read down Section 377 of of the Indian Penal Code, which criminalises homosexuality, to exclude consensual sex between adults in private in its judgment in Naz Foundation v. Union of India (2009), holding that the law making it a criminal offence violates fundamental rights.

"We declare Section 377 of IPC in so far as it criminalises consensual sexual acts of adults in private is violative of Articles 14, 21 and 15 of the Constitution," a Bench comprising Chief Justice A P Shah and Justice S Murlidhar said.

While it is a tightly argued judgment (for the full text, please click here), its concluding part, by itself, is definitely worth reading in full:

129. The notion of equality in the Indian Constitution flows from the ‘Objective Resolution’ moved by Pandit Jawaharlal Nehru on December 13, 1946. Nehru, in his speech, moving this Resolution wished that the House should consider the Resolution not in a spirit of narrow legal wording, but rather look at the spirit behind that Resolution. He said, "Words are magic things often enough, but even the magic of words sometimes cannot convey the magic of the human spirit and of a Nation’s passion…….. (The Resolution) seeks very feebly to tell the world of what we have thought or dreamt of so long, and what we now hope to achieve in the near future." [Constituent Assembly Debates: Lok Sabha Secretariat, New Delhi: 1999, Vol. I, pages 57-65].

130. If there is one constitutional tenet that can be said to be underlying theme of the Indian Constitution, it is that of 'inclusiveness'. This Court believes that Indian Constitution reflects this value deeply ingrained in Indian society, nurtured over several generations. The inclusiveness that Indian society traditionally displayed, literally in every aspect of life, is manifest in recognising a role in society for everyone. Those perceived by the majority as "deviants' or 'different' are not on that score excluded or ostracised.

131. Where society can display inclusiveness and understanding, such persons can be assured of a life of dignity and nondiscrimination. This was the 'spirit behind the Resolution' of which Nehru spoke so passionately. In our view, Indian Constitutional law does not permit the statutory criminal law to be held captive by the popular misconceptions of who the LGBTs are. It cannot be forgotten that discrimination is antithesis of equality and that it is the recognition of equality which will foster the dignity of every individual.

132. We declare that Section 377 IPC, insofar it criminalises consensual sexual acts of adults in private, is violative of Articles 21, 14 and 15 of the Constitution. The provisions of Section 377 IPC will continue to govern non-consensual penile non-vaginal sex and penile non-vaginal sex involving minors. By 'adult' we mean everyone who is 18 years of age and above. A person below 18 would be presumed not to be able to consent to a sexual act. This clarification will hold till, of course, Parliament chooses to amend the law to effectuate the recommendation of the Law Commission of India in its 172nd Report which we believe removes a great deal of confusion. Secondly, we clarify that our judgment will not result in the re-opening of criminal cases involving Section 377 IPC that have already attained finality.

We allow the writ petition in the above terms.
CHIEF JUSTICE
S.MURALIDHAR, J

The Bench was critical of the provision of Section 377 of IPC holding that "a provision of law branding one section of people as criminal based wholly on states' moral disapproval of that class goes counter to equality guaranteed in the Constitution."

"The provision of Section 377 runs counter to the Constitutional values and the notion of human dignity which is considered to be cornerstone of our constitution.

"Section 377 in its application to sexual act of consenting adults in privacy discriminates a section of people solely on the ground of their sexual orientation which is analogous to prohibited grounds of sex," the Bench said.

The Bench pulled up the government for its stand that judiciary should refrain from interfering on the issue as it pertains to legislative function coming under the ambit of Parliament.

"We are constrained to observe that the submission of Additional Solicitor General reflect rather poorly on his understanding of the Constitutional scheme.

"The judiciary is constituted as the ultimate interpreter of the Constitution and to it is assigned the delicate task of determining what is the extent and scope of the power conferred on each branch of government," the bench said.

"A constitutional provision must be construed, not in a narrow and constricted sense, but in a wide and liberal manner so as to anticipate and take it out of changing conditions and purposes so that the Constitutional provision does not get atrophied or fossilised but remains flexible enough to meet the newly emerging problem," the Bench said quoting a Supreme Court judgement.

The High Court judgement assumes importance as the Government is still grappling with the option to scrap Section 377 from the statute.

When the verdict was reserved on November 7 last, the previous UPA government had vociferously opposed scrapping of Section 377 of the Indian Penal Code which prescribes punishment up to life imprisonment for indulging in unnatural sexual acts.

There were contradictions and conflicts within the Government as the Home Ministry had opposed scrapping of Section 377 while Ministry of Health came out openly in support of the gay rights activists.

The Government later sidelined the stand of the then Health Minister Ambumani Ramadoss and opposed the PIL by describing homosexuality as "the most indecent behaviour" in society.

The Centre had submitted that gay sex is immoral and reflection of a perverse mind and its decriminalisation would lead to moral degradation of society.

"Every citizen has the right to lead a decent and moral life in society and the right would be violated if such behaviour (gay sex) is legalised in the country," the government had contended and added that allowing gay sex would pose a health hazard to society.

The gay rights activists had contended that the government is infringing upon their fundamental right to equality by criminalising homosexual acts on the ground of morality.

"The Constitution gives fundamental right to equality and it prohibits discrimination on the basis of sex. But the rights of 25 lakh homosexuals in the country are being violated," they had contended.

Earlier, the government had put a contradictory stand on the issue with the Home Minister of the then UPA government favouring the retention of the penal provision for homosexual acts while the Health Minister opposed the enforcement of Section 377 in cases involving consenting adults.

But when the day-to-day hearing began on the case, the government set aside the stand of the Health Ministry and opposed the plea of the gay rights activists.

Read the full text of the judgement here.

As Tarunabh Khaitan, in his preliminary remarks on the Law and Other Things blog pointed out, the Court has given a new lease of life to Article 15 which says:

1. The State shall not discriminate against any citizen on grounds only of religion, race, caste, sex, place of birth or any of them.

2. No citizen shall, on ground only of religion, race, caste, sex, place of birth or any of them, be subject to any disability, liability, restriction or condition with regard to -

a. access to shops, public restaurants, hotels and places of public entertainment; or

b. the use of wells, tanks, bathing ghats, roads and places of public resort maintained whole or partly out of State funds or dedicated to the use of general public.

The judgement, he points out, read sexual orientation as an analogous ground in Article 15(1), insisted that Article 15 prohibits horizontal discrimination between citizens as well, and applied strict scrutiny (paras 105-115). On horizontality, para 104 of the judgement says:

This, Khaitan points out, is groundbreaking:

Presumably, the horizontal protection extends not just to sexual orientation but also to other grounds like sex, religion and caste. Prohibiting discrimination in the private sector is now a constitutional imperative. Para 93 of the judgment cites nuanced concepts such as 'direct discrimination', 'indirect discrimination' and 'harassment': concepts that this Open Letter to the Minority Affairs Minister on the Equal Opportunity Bill insisted upon. For all their opposition to the judgment, religious groups should not miss this crucial constitutional interpretation which will probably benefit them the most.

On the question of justification of a restriction of Article 21, the Court draws this crucial distinction between popular morality and constitutional morality in para 79:

Read the full text of the judgement here and below:

Naz Foundation vs Government of NCT of Delhi