This was Dhoni’s job and Dhoni’s stage. He didn’t hide. He wasn’t coy or fearful. He went in and simply did the job. 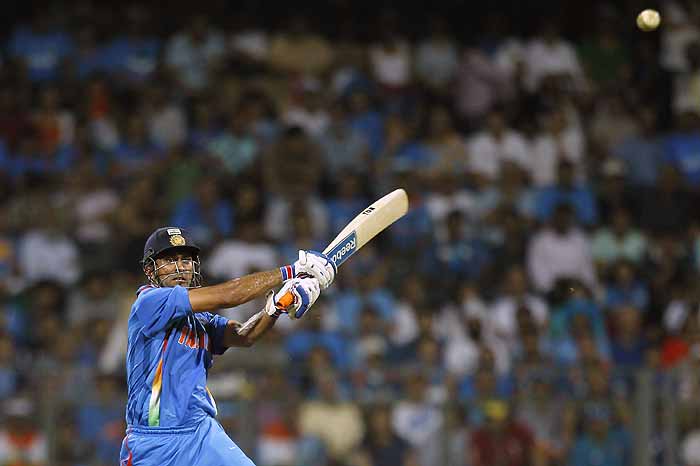 Couldn’t bat, couldn’t keep wicket, right? The show pony with a long mane and no batting technique? Sloppy behind the wicket, unable to keep to swing or spin? The creation of the media, a mere hawker of commodities?

Mahendra Singh Dhoni has, yet again, shown that though he might be all that, he’s a bit more than that. He’s god - for cricket fanatics of India.

Twenty-eight years after India first won the World Cup that has had a cataclysmic effect on the world of cricket, India is world champion again.

India becomes the third team to win the World Cup two times after West Indies and Australia. Leading from the front was Mahendra Singh Dhoni, who showed that grit and mental strength are greater than mere talent.

Virat Kohli was out in the 22nd over, with the team needing 161 runs. The man for the job would have needed a still, clear mind; ability to run hard and smash the ball if the going tough.

Yuvraj Singh can do it too, but he’d got a first-ball duck in the semifinal against Pakistan – for that reason more than anything else, this was Dhoni’s job and Dhoni’s stage. He didn’t hide. He wasn’t coy or fearful. He went in and simply did the job.

He did it by playing extreme smart cricket. He started slowly, his first 12 runs coming off 21 balls. He wasn’t going to panic and start slogging. He would hang round, get his eye in, run hard, and when he got a chance, smash a four or two. He hit his first four off the 25th ball he faced, the ball hit through the vacant cover off Muttiah Muralitharan.

Dhoni’s gameplan was simple. For the most part, the Sri Lankan spinners had two men saving the single on the leg-side and several guarding the boundary. The challenge was to play the ball against the turn and use the vacant space on the off-side. Dhoni’s first four, against Murali, came through such a shot. He did this through the innings, running singles hard and doubles harder.

India were lost when he came in. Slowly, and without Dhoni giving an opportunity, India began to gain ground.

Dhoni is accused of playing ugly. But in ugliness tonight, there was much beauty, the beauty of an intelligent mind that’s executing the plans it had made. There was one error in running between the wickets, and Dhoni raised his bat and struck his pad hard in anger – there may be blemishes in his technique, but he didn’t want to lose control of the “controllables”. And running between is the part of the game he has most control on.

He started hitting the ball for boundaries more regularly when he knew victory was nigh, and when the batting Powerplay had pulled the field in. And then, finally, that winning six.

This was one amazing performance by an amazing man. He may not possesses “proper” technique – but he also possesses no nerves at all. That makes him such a great player and captain.