India failed to defend 156/6 against a dominant England and lost the third T20I match by eight wickets. Catch highlights and cricket score here 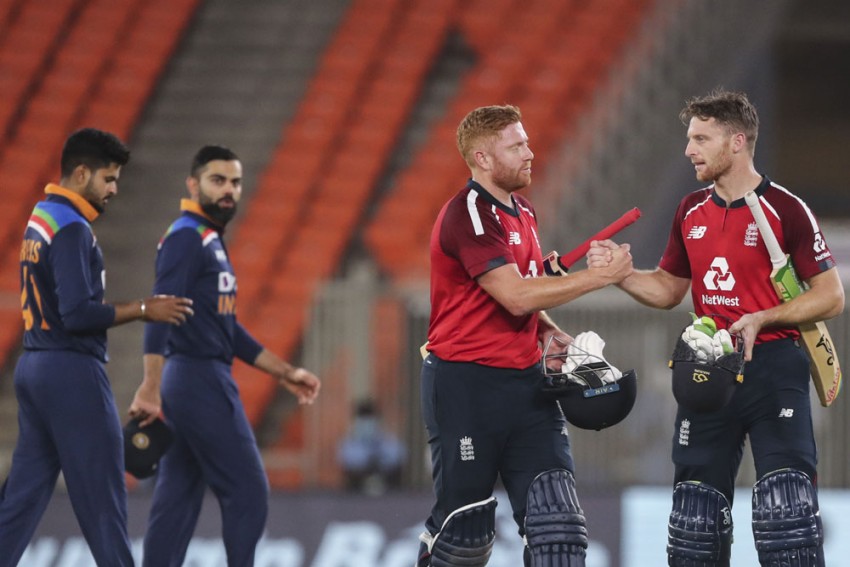 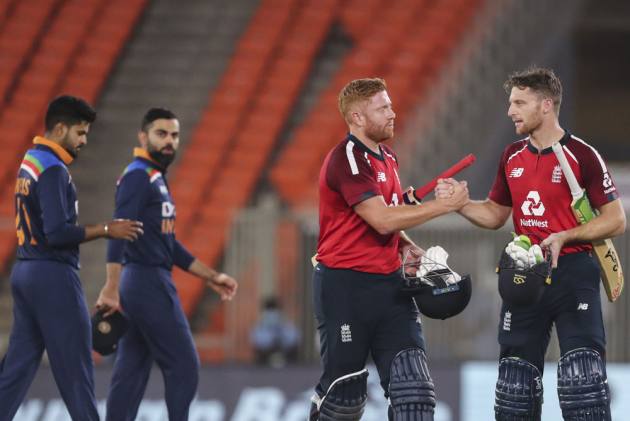 India were deflated by a sensational Jos Buttler as England cantered to an eight-wicket win in the third T20I match at Narendra Modi Stadium, Ahmedabad on Tuesday. The win helped Eoin Morgan's side take a 2-1 lead in the five-match series. Morgan won a crucial toss and put India into bat. The hosts, who brought Rohit Sharma, once again failed to get a good start with KL Rahul getting for a duck, again. Then, by the 12th over, they were four down. But skipper Virat Kohli, batting at four to accommodate Ishan Kishan, hit a majestic 46-ball 77 not out as India set a 157-run target. England's chase started well with Buttler on the song. Yuzvendra Chahal got the wicket of Jason Roy in the fourth over, but Dawid Malan scored crucial 18 runs to ease the pressure on Buttler. Then, Jonny Bairstow joined the hunt with an unbeaten 40 off 28 balls. Buttler was undefeated on 83 off 52. But the one script which can't be missed in this series is, chasing teams have won all three matches so far. For the record, the win was England's 99th over India across formats. They thus joined the West Indies in the second spot behind Australia (132) for the most victories against India. The fourth match is scheduled for Thursday at the same venue: Catch highlights here:

10:47 PM IST:  So, that's it. England defeated India by 8 wickets in the third T20I to move 2-1 up in the five-match series. Invited to bat, skipper Virat Kohli pulled India out of trouble with an unbeaten 46-ball 77 as the hosts posted 156 for six. Jos Buttler then smashed an unbeaten 52-ball 83 to take England home in 18.2 overs.

8:50 PM IST: After a horror start to their innings, India managed to post 156 for 6, courtesy skipper Virat Kohli's unbeaten 77. For England, Mark Wood (3/31) took three wickets to emerge as the most successful bowler, while Chris Jordon (1/35) claimed one.

6:36 PM IST: India make one change, with Rohit Sharma replacing Suryakumar Yadav, who made his India debut in the last match. England also have one change. Mark Wood comes in for Tom Curran.