Daniel Elahi Galan was no match for Novak Djokovic, who won in straight sets to reach the fourth round in Paris for an 11th straight year 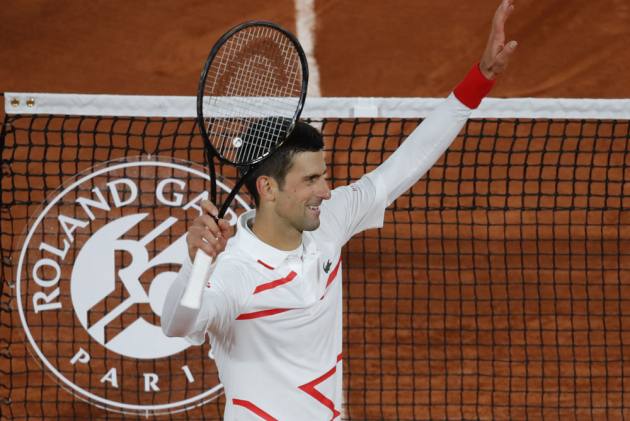 In advancing to that stage for an 11th straight year, the world number one equalled a Roland Garros record held by his long-time rivals Rafael Nadal and Roger Federer, and set up a fourth-round tie with 15th seed Karen Khachanov.

Djokovic had never lost to a lucky loser and world number 153 Galan, whose first two wins at a grand slam came earlier this week, was no match for the Serbian - the victory confirmed in two hours and eight minutes.

The two had a prolonged stay on Philippe Chatrier, though, as the match was suspended in the second set while they waited for the roof to close - something that Djokovic had called for long before it happened - on a rainy Paris evening.

The roof being open was an irritant to the Serbian in the first set, not that it prevented him from taking the opener with ease as Colombian Galan failed to produce a single winner.

However, the ongoing drizzle continued to frustrate Djokovic in the second, particularly following back-to-back double faults, and the roof started to close after Galan won his first game with a brilliant cross-court forehand.

Heavier rain started to fall and the world number one called a halt to proceedings himself when Galan slipped, leading to a second-set suspension while the roof fully closed, with Djokovic amusing himself by grabbing a brush and helping out the baseline maintenance.

If tennis doesn’t work out, we have a job for you @DjokerNole #RolandGarros pic.twitter.com/B56ubcRQSS

Upon the resumption, his second successful break of the second set put him six games from victory and he duly wrapped up the win without dropping serve.

He may have only won this grand slam on one occasion - in 2016 - but this was Djokovic's 71st victory at Roland Garros, taking him past Federer for the second-most in the event's history. Clay-court king Nadal is the only man with more French Open victories and Djokovic remains some way off his total of 95.