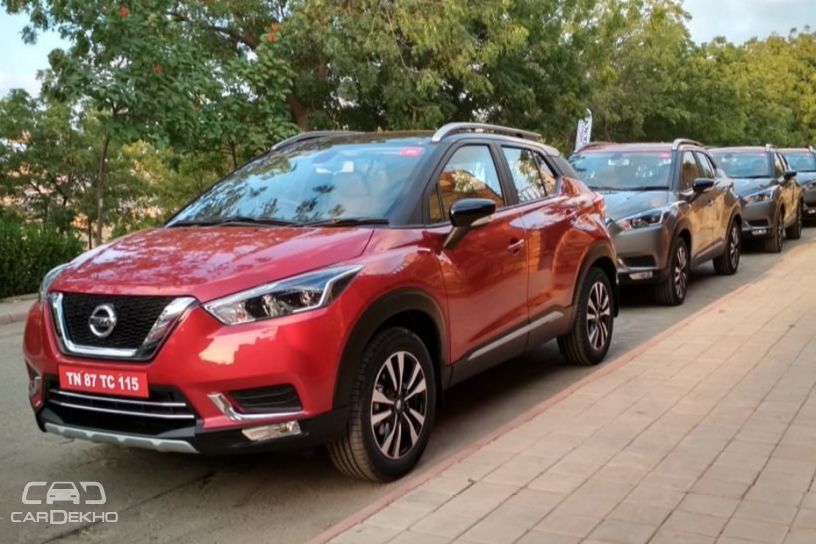 The India-spec Nissan Kicks is based on the B0 platform just like other Renault-Nissan compact SUVs in India. So it’s bigger and slightly more imposing than the global-spec Kicks which is based on the V platform that also underpins the Micra. 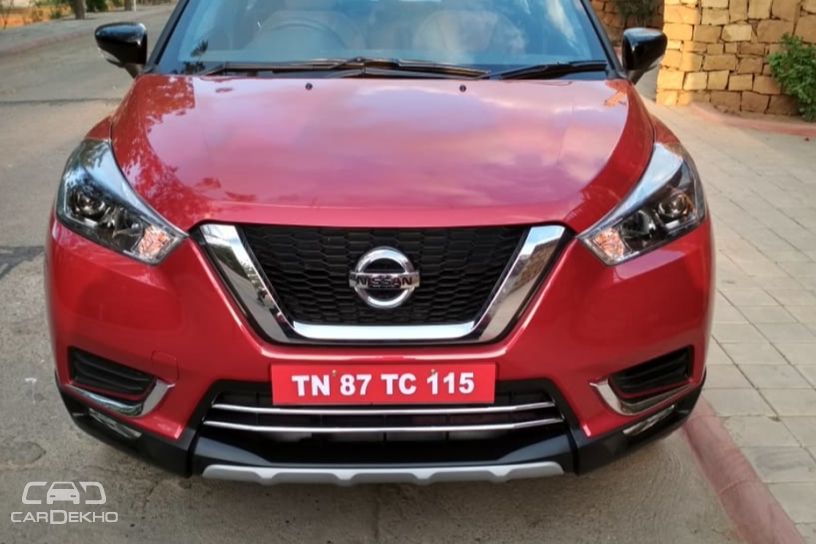 It looks quite SUV-like from the front, thanks to a high-set bonnet and a strong dose of chrome on the V motion grille. The grille is flanked by upswept headlights which comprise of blacked out auto LED projectors and multi-reflector units. Adding to its premiumness are the LED daytime running lamps. There’s also a faux skid plate and rectangular fog lamps with cornering functionality. 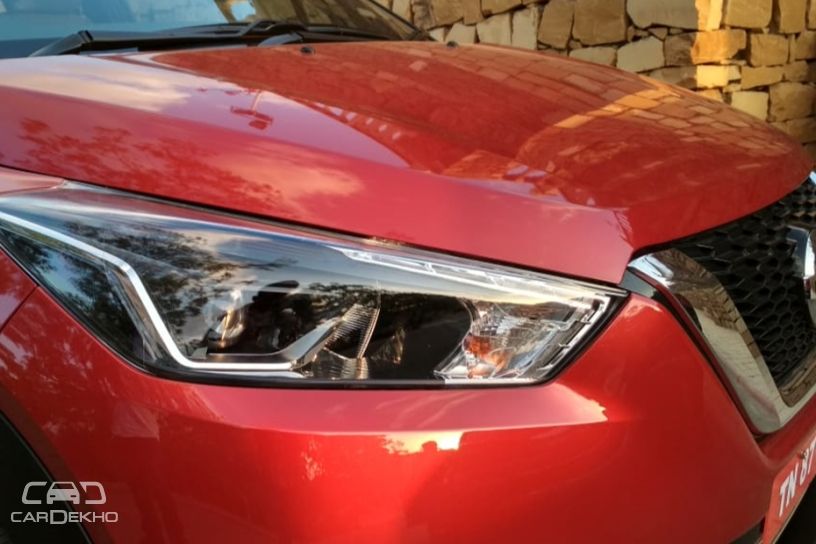 The Kicks gets slightly flared wheel arches with black cladding which accentuates its SUV characteristics. At 210mm, its ground clearance is the highest in the segment, same as the Renault Captur. 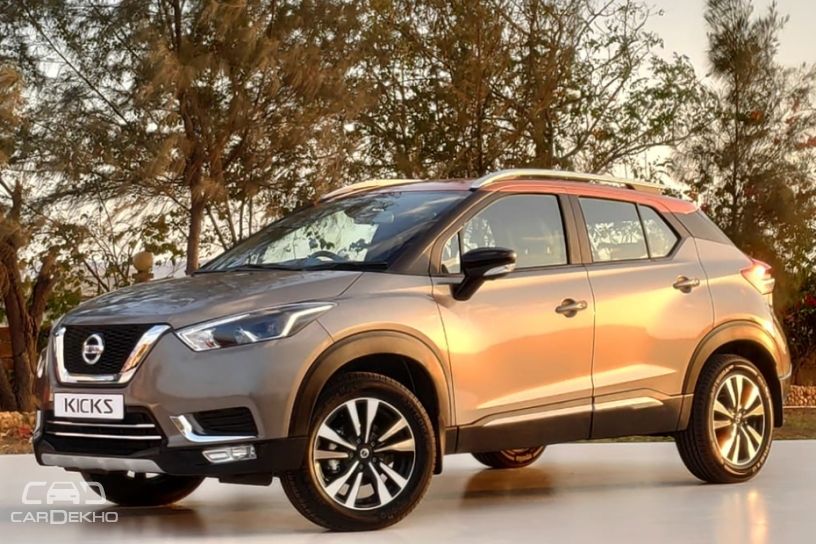 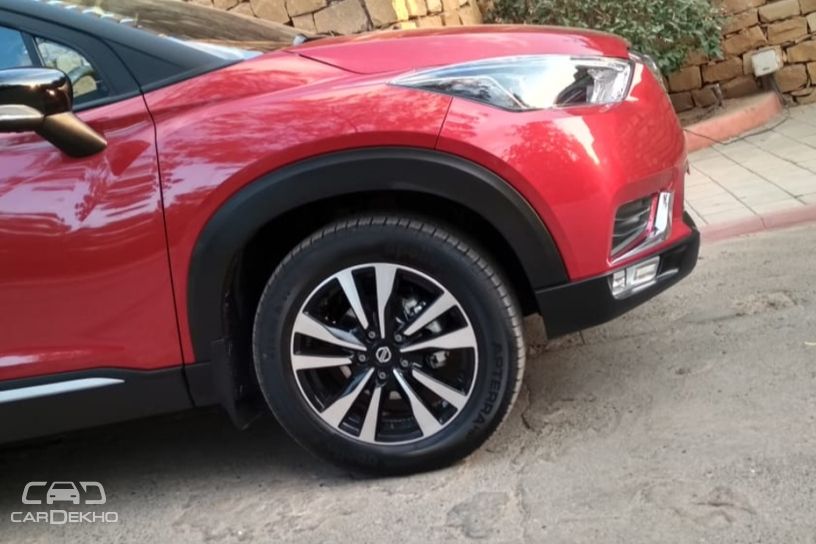 What particularly begs for your attention is the floating roof design with roof rails and a distinctive kink over the C-pillar, identical to the global version. 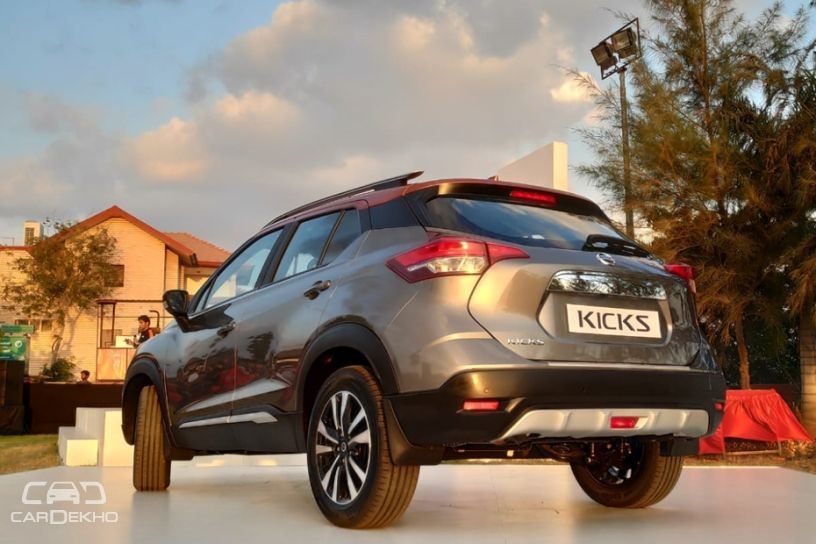 For some more bling, you can also opt for a dual-tone paint job. 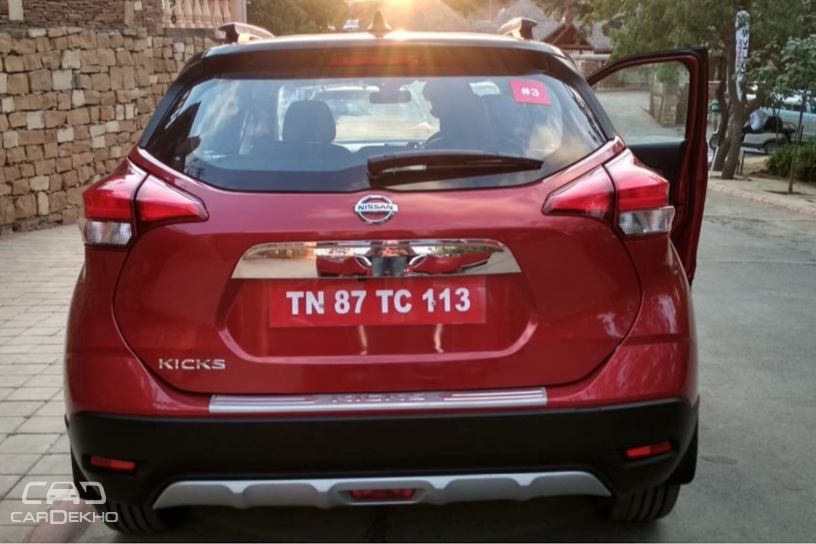 At the rear, highlights include the boomerang shaped tail lamps but with incandescent bulbs instead of the LED inserts seen on the Renault Captur. Overall, the design is quite striking, with cuts and creases on almost every part of the SUV.

The party trick on the Nissan Kicks is the 360-degree camera which means there are cameras placed on the front Nissan badge, door-mounted outside rearview mirrors and under the chrome strip that runs across the rear end. It offers a virtual bird’s eye view, front view, side view and rear view of the SUV, all of which come in handy while parking. 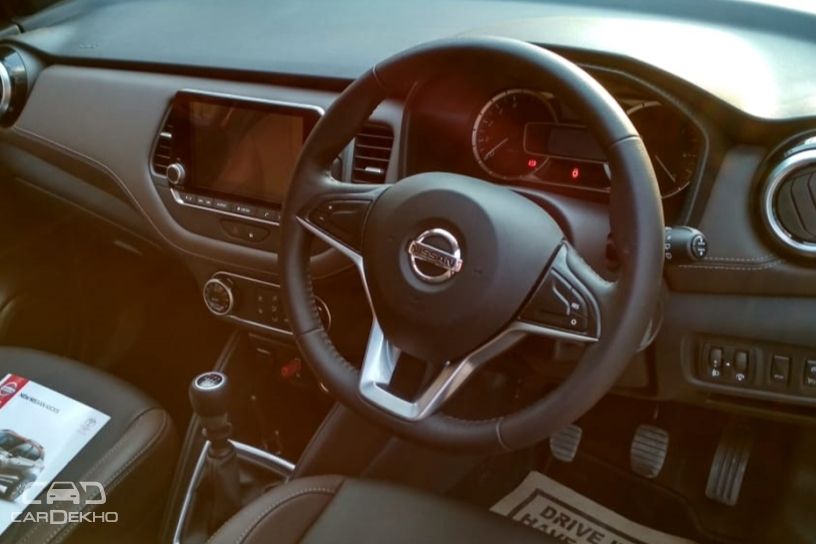 Entering the Kicks is quite easy as it should be for a high rider. On the inside, it gets a dual-tone brown and black theme with carbon-fibre finish at certain places. 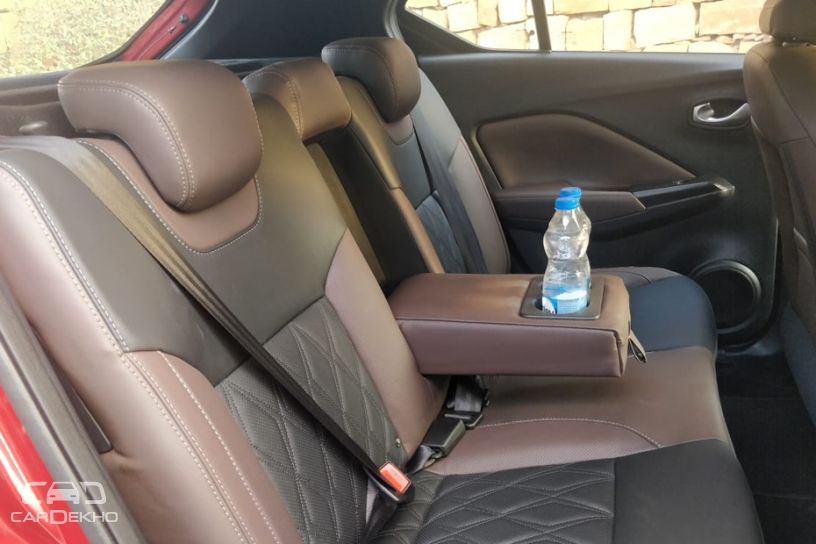 Leather has been generously used for the touch points to make it feel premium. So you get it on seats, steering wheel, gear knob and even as door inserts. The leather upholstery on the seats is perforated and also features a quilted pattern. 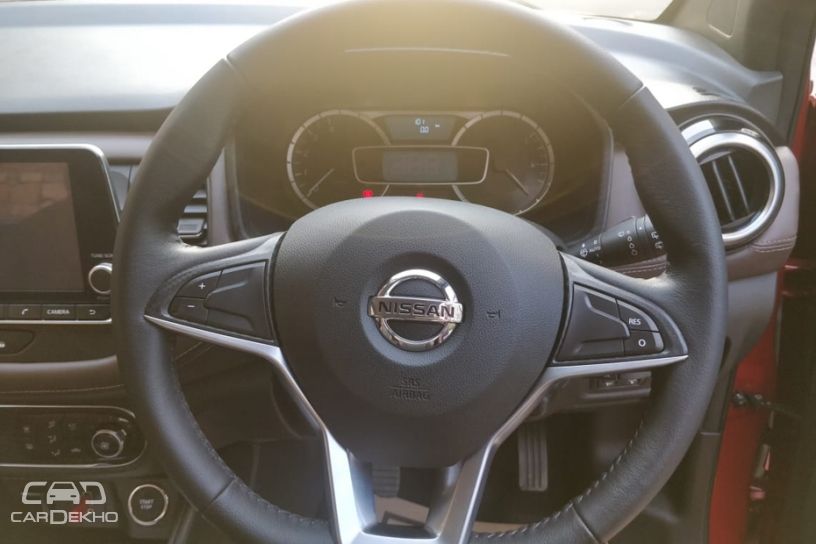 Taking centre stage on the dash is the 8-inch floating touchscreen, which is largest in the segment. It supports Android Auto and Apple CarPlay as well as Nissan Connect telematics control. 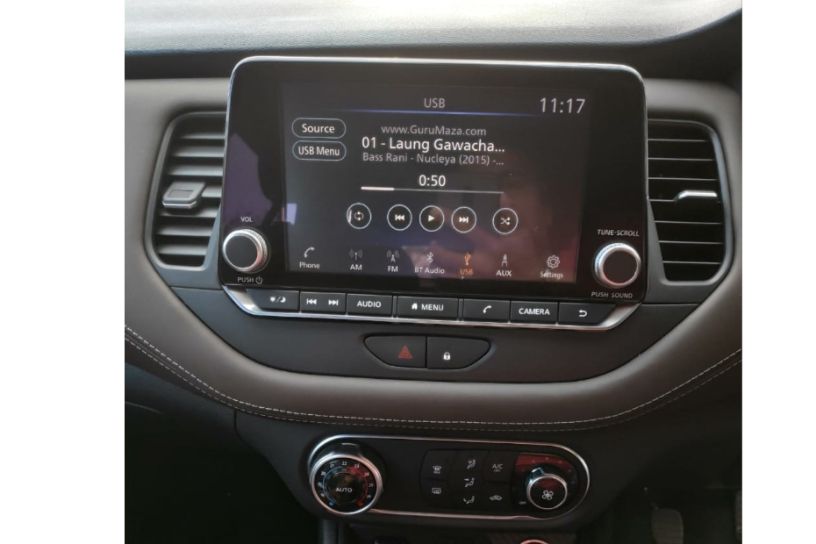 The Nissan telematics services keep owners informed about various statistics of their vehicle in real time via an app. With the Kicks, Nissan is adding smartwatch support for the Nissan Connect app. 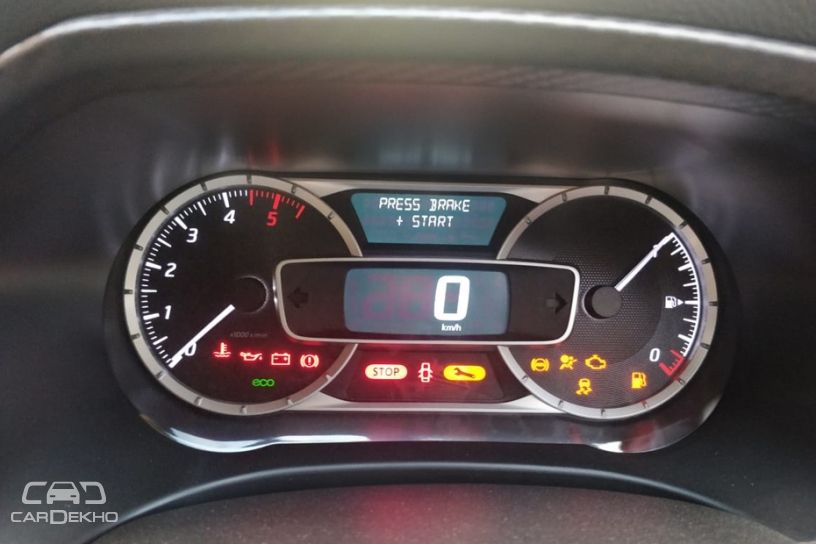 The instrument console comprises of analogue dials for the tachometer and engine temperature, while the speedometer and MID are digital. Overall, the setup looks quite similar to the one in the Captur. 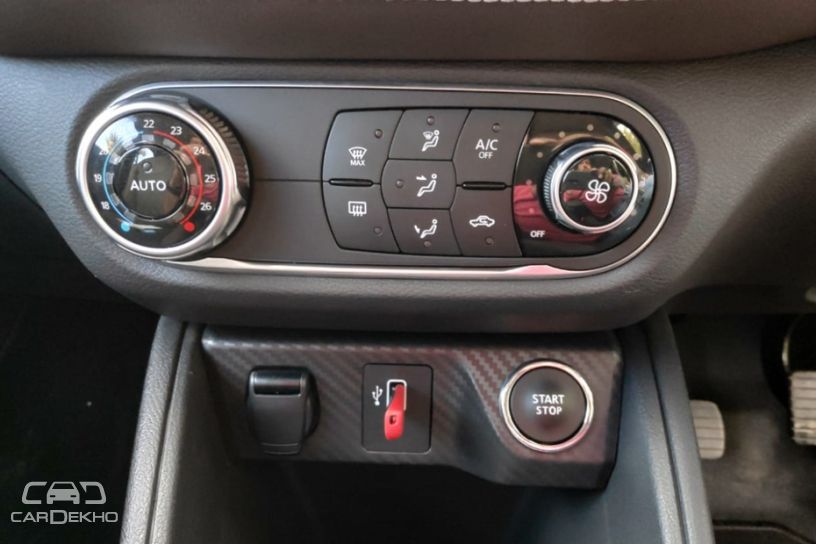 A climate control unit, which is offered as standard, is placed right below the touchscreen unit with the push-button for start/stop placed rather oddly at the bottom right corner. 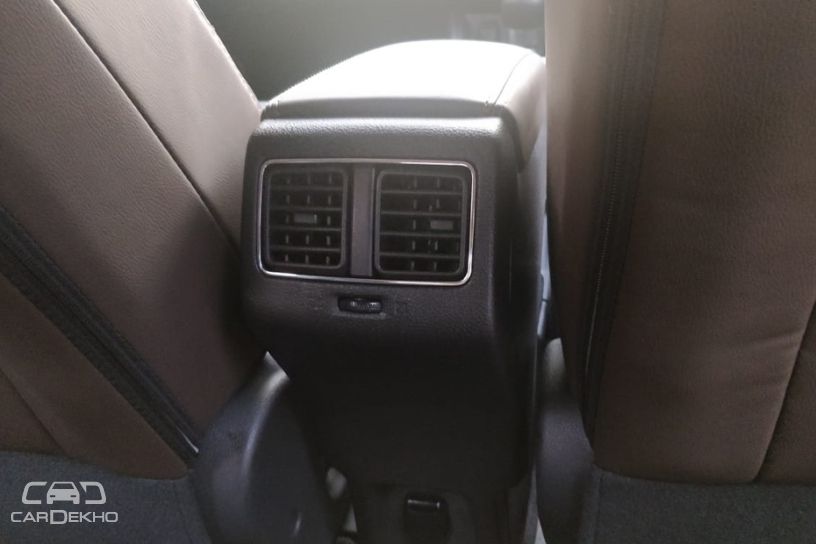 The Nissan Kicks’ 400-litre boot should be enough to gobble up your family’s weekend luggage. It is marginally bigger than the Captur’s (392 litres) and is identical to the Creta’s.

With the basics covered and competitive list of features, the Kicks does seem like a promising product.