Home  »  Website  »  Sports  » Opinion  »  Kumble Should Have Been Fielded
Opinion

Kumble Should Have Been Fielded

Kumble, in all the years I have known, is a master in creating pressure. He would have made good use of the batsmen's defensive mindset and who knows, with a few fielders breathing down their neck, it could have told on the Sri Lankan team. 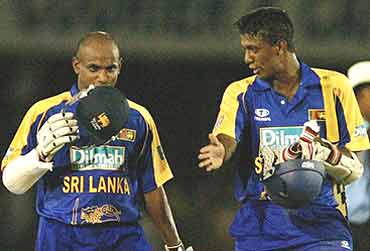 India will always wonder if Anil Kumble could have made the difference. India did not have Sachin Tendulkar or Saurav Ganguly and V.V.S. Laxman pulled out in the morning. It was a side which was low on experience and was crying for some cool heads.

Besides, it is too obvious that three left-arm seamers is not the best way to have variety in your attack. A batsman is best confronted when he has different angles, line and lengths and field positions to contend with. Kumble, in all the years I have known, is a master in creating pressure. He would have made good use of the batsmen's defensive mindset and who knows, with a few fielders breathing down their neck, it could have told on the Sri Lankan team.

At no stage I am running down the inclusion of two debutants in Suresh Raina and Venugopal Rao. I would love to see Raina more in this tournament as I liked the way he walked into the middle for his first international game. There are some things about a cricketer which reveal his entire character.

Unfortunately, Raina faced the first ball of his career like nothing he would have ever faced in his life. Muralitharan's wrong 'un completely did him in.

Murali presently is at the top of his form. His googlies are turning four or five feet which do not allow batsmen to pre-judge him. In this form, it will be difficult to hit him for boundaries. I could remember only two from this game and one of them went dangerously close to first slip.

Rao, in his first international, has taken a huge step forward. He can hope for a career at this level. His performance acquires extra dimension on two counts: one, the side was close to being wiped out at the half-way stage and two, Murali had tasted blood. He virtually saw through Murali's first spell which is no mean feat. Admittedly luck favoured him a couple of times but then the pitfalls of facing Murali is a road which has never been without potholes.

Sri Lanka too had a youngster who shone through in his opening game. Dilhara Lokhuttige bowled a miserly and productive spell and his 21 runs in the middle was a critical contribution. I liked the way he and Farvez Mahroof shared the new-ball burden in the absence of Chaminda Vaas and Nuwan Zoysa.

I can also offer words of encouragement to Dilhara Fernando even though his figures reflect him to be the most expensive bowler from Saturday's game. He went for 61 runs but from Sri Lankan cricket's point of view, it is good that he is back. He has that pace and bounce which on a good day will win Sri Lanka many a game.

When you are missing top players, the best of the rest need to put their hands up. India needed Virender Sehwag to bat for long. But personally I would not like Sehwag to curb his natural style. He is best suited to play his own brand of cricket and tampering it might not work. Still, if an idea or two comes in his mind watching Sanath Jayasuriya bat, it would not hurt him or Indian cricket at all!

Jayasuriya too is a blaster who over the years has learnt to shift gears. His batting with a dislocated shoulders just cannot be measured by runs alone. There was heroism in his act, an act of courage and a raging desire to win the game for his nation. It reminded me of my own knock in a Test in Pakistan when I had four fractures in the thumb but guided my team for those final 60-odd runs with the help of tailenders.

Dravid, in his first full assignment as captain, handled the side very well. But he missed the presence of a fifth bowler. I would also criticise him for the choice of Yuvraj Singh at number three. I think Yuvraj is best suited at number five or six. To suggest that he batted at three to protect him against the spinners in the middle overs is kind of offering him crutches when he should be walking alone. If Dravid did not want to bat at three, Mohammad Kaif could have come at the fall of the first wicket for he has better technique against pace.

Sri Lanka too have come out of the park with the feeling that not everything is right with their batting line-up. The likes of Marvan Atapattu and Mahela Jayawardene have still not been able to spend time in the middle. It is taking them some time to wipe off the rustiness of a long break from the game.

They need a good pool of batsmen who can cover up some poor form or injury, like the one we are confronted with on the count of Jayasuriya.

India, despite the defeat, will take some positives from the game. It is not easy to balance a side when two or three top players are missing from the line-up.