The young leader's pledge to provide 10 lakh jobs has struck a chord with the state's youth. 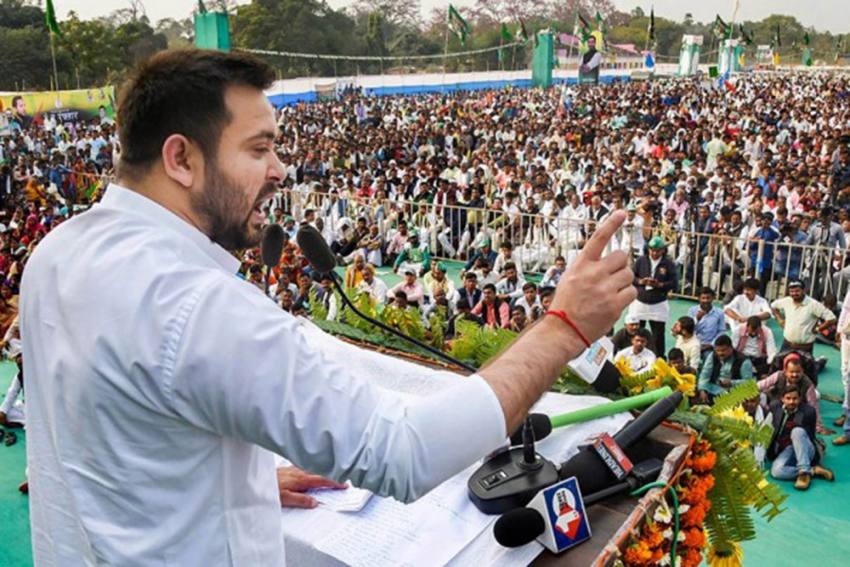 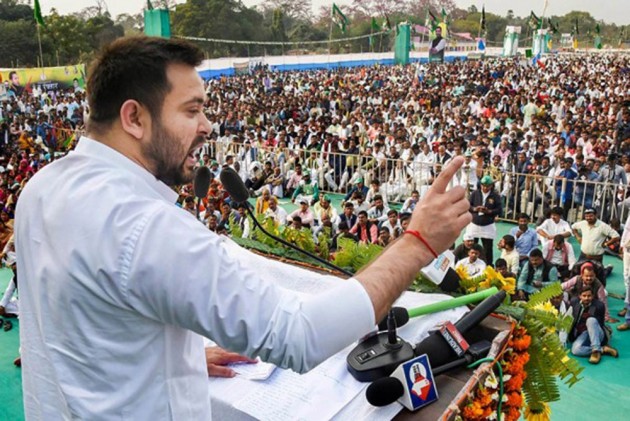 Recent opinion polls may have given Nitish Kumar-led NDA very little cause to worry about the alliance’s prospects in the upcoming Bihar assembly polls. However, if one looks at the massive crowds Tejashwi Prasad Yadav is being able to attract at his rallies, then it would be premature to write off the RJD-led Mahagathbandhan in the state. In fact, Tejashwi is leading a spirited charge of his alliance almost singlehandedly, holding 10 to 12 rallies a day which are drawing people in large numbers, especially with the state’s youth making it a point to attend his rallies despite the lurking threat of Covid-19.

The overwhelming response to his rallies has enthused the 31-year-old leader, who is spearheading the campaign of his party and alliance in the absence of his father Lalu Prasad Yadav, who has been serving a prison term after being convicted in the multiple cases of fodder scam. “The people have made up their minds, Nitish Kumar will be given a farewell on November 10, Tejashwi said confidently.

Polling in Bihar is scheduled to take place in three phases on October 28, November 3 and November 7 and the counting of votes will be held on November 10.

Tejashwi Yadav’s supporters already think he is on his way to becoming the youngest-ever chief minister in the country, given the tremendous response his rallies are generating. But the moot point remains: will the footfalls at his rallies convert into votes?

Political observers believe that Tejashwi’s promise to provide 10 lakh government jobs immediately after coming to power appears to have struck a chord with the youngsters and might prove to be his trump card during this election, though the Nitish Kumar-BJP combination has remained unbeaten for the past 15 years.

Nonetheless, with 52 per cent of its population under the age of 35, Bihar remains one of the youngest states in the country but its unemployment rate has shot up to 46 per cent in recent times. The situation turned particularly grim during the lockdown when lakhs of migrant workers returned home after losing their jobs in different states.

The NDA leaders, however, rubbished Tejashwi's promise of providing 10 lakh government jobs. Chief Minister Nitish Kumar wondered where the money to provide so many jobs will come from? “Will it be arranged from prison or will fake currencies will be printed?” the Bihar chief minister asked during one of his rallies.

Deputy chief minister Sushil Kumar Modi said the government will have to generate an additional Rs. 58,000 crore to create 10 lakh jobs. “The Opposition is making a promise which will never be fulfilled,” Sushil Kumar Modi said, adding that it was just a mere, unpractical poll promise, made to gain votes.

Tejashwi, however, sounds optimistic about being able to keep his promise. Tejashvi has claimed that 4.5 lakh posts are already lying vacant while the remaining 5.5 lakh will be created once his government comes to power. He has also said that 40 per cent of the total state budget which remains unspent, will be used to provide new jobs.

Incidentally, all the three recent opinion polls on Bihar elections conducted by different agencies have projected a smooth comeback for Nitish Kumar for his fourth consecutive term, but Tejashwi remains confident that the electorate will prove the polls wrong.