'India Lacked The Hunger To Win'

'It will be far too easy to place the blame on Sachin for having batted too slowly on the second afternoon. But if you ask me India still had the right lead and five sessions to clean up Pakistan. They couldn't manage to do it.' 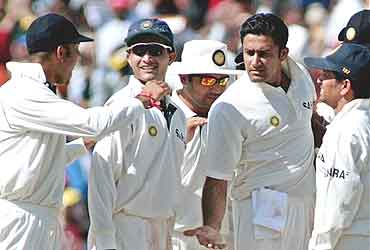 If India could not quite finish the job of winning the Mohali Test, it was because the team did not show the hunger on the field. They didn't have the body language of a winner. They couldn't have lost from that position. When you worry too much about winning or losing, you stop playing good cricket. Australians are champions because they strive to play good cricket. Other things take care of themselves.

It will be far too easy to place the blame on the doors of Sachin Tendulkar for having batted too slowly on the second afternoon. The common refrain is it cost India important runs and time. But if you ask me India still had the right lead and five sessions to clean up Pakistan. They couldn't manage to do it.

To blame Tendulkar, or for that matter Saurav Ganguly and V.V.S. Laxman for that second afternoon, is missing the point. To term it as the turning point of the game is childish. India then were in the process of consolidating their position. They did it and still had adequate time to spare. Three wickets in first four overs was a sensational follow-up.

Kamran Akmal and Abdul Razzaq still deserve every bit of praise which is coming their way. They showed the virtue of the game's golden lesson: If you play within yourself and don't try to be ambitious, you can work wonders.

Razzaq has always played within his limit. Kamran may have been under some pressure for his spot but at least one more settled spot now is only good news for Pakistan. Youngsters must get a reasonable run. When you expect juniors to play like seniors, you are asking for the moon. One must remember one's own young days and then the expectations will be reasonable.

Mohammad Sami is still not producing results and he continues to have no-ball problems. It happens when he tries to go for extra pace. As Lakshmipathy Balaji showed so well in the match, you need to swing the deliveries rather than strive for extra pace for useful results.

Razzaq and Rana Naved-ul Hasan too have questions on their ability as Test bowlers. It wouldn't be too bad to bring on the young left-arm pacer Mohammad Khalil in the next game.

The stand-out bowler for Pakistan of course was Danish Kaneria. Trust me, we worked very hard on his run-up and line and length. We always asked him to roll his leg-breaks a lot more in order to get the bounce. He now has a great future ahead of him, as does Balaji. How they progress depends entirely on them.

They need to practice hard and have long term vision. If they want to last for a decade or more, they must know the demands it would make on them. First of course is fitness and the other is try to learn and improve all the time. Cricketers who last long have that extra commitment. Kaneria has to bowl 15-20 overs every day to get his spin, run-up, bending on the front foot perfect.

The dismissal of Inzamam-ul Haq in both innings has raised heat in Pakistan. He was given leg before playing well forward in both the innings. I would not commit myself either way because I've always believed we have the advantage of replays while umpires in the middle don't have that luxury.

To make a decision in real-time is a different matter. The only thing we ask for umpires is that they should be consistent with their decisions.

As for the Indians, they would be delighted with the form of Virender Sehwag. He is what I say of good cricketers: They try to play good cricket and are not too hung up on pre-determined ideas.

India's batting too has lived upto its billing. The first match of a series is always very crucial in that you try to gauge each other's strength. India would be delighted their batting is working perfectly.

Ironically, despite it's top order failing, Pakistan too has few worries with its batting. If your number eight batsman can score a hundred, the rest begin to bat with renewed confidence.

By the evidence of this Test, India and Pakistan are good in their batting. It is the bowlers who have their work cut out. Pakistan must find the men who can take 20 wickets in a match. India too would have a few question marks on its bowlers for they couldn't convert a handy lead into a victory.