'Imperialism At Its Worst'

While the irony of CPI(M) complaining about 'strange bedfellows' — BJP president Rajnath Singh, Trinamul Congress's Mamta Banerjee, sections of state Congress leadership and Medha Patkar — is delicious, at least those like Medha Patkar have been cons 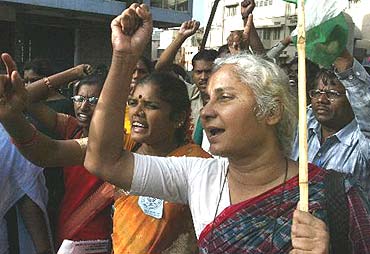 To
The Leaders of the Left Front
(CPM, CPI, RSP, Forward Bloc)

This is a common letter to the Left Front partner organizations, the parties, through the office bearers, which I am compelled to write in certain unprecedented circumstances. As you know, NAPM and hundreds of organizations, movements in the country feel seriously concerned about the onslaught on the farming communities, the fish workers, artisans and other rural and adivasi populations. In the name of development, their livelihood are being destroyed, land and other life supporting resources are taken over, their culture and communities killed. Misusing law against the Constitution and bringing in new legislation or amendment to favor the corporate take over with the State acting as an agent, facilitator, in alliance with the investors of capital—companies to builders—is the worst that could happen to the indigenous and industrious populations in the country. This is inhuman face of marketisation and commodification based economic policy that both NDA and UPA governments have been following shamelessly and arrogantly. SEZ is the latest and the worst example.

In this context, the left front initially took a position appropriate for a supporter of the secular alliance, the UPA, bringing in the common minimum programme and questioning many of their decisions. We welcome this whole-heartedly. Recently, however, there is a clear shift in the stance reflected in the happening related to development project planning in West Bengal, which has shocked and saddened us. Something, which we could never expect, having experienced Left support and partnership in the past, during anti-Enron as well as Narmada struggle, which was valuable, is coming to the fore. We have also seen the ideological justification of the decisions to join the capitalist forces, the corporates, with compromises, put forward by none else but Shri. Binoykumar in the People's Democracy as well as the Left Front's position letter on SEZ, addressed to the Prime Minister.

The different positions taken in different states as well as the public statements which too vary and at times exhibit contradiction are also carefully studied by us and all this has brought us pain and anguish leading to protests.

The case of Singur is one of immediate concern. As you may be aware of we—Justice M. Sengupta (Retd.), Smt. Mahashweta Devi, Shri. Deepankar Bhattacharya and myself —were invited for a Public Hearing held on October 27th at Bajemelia. We heard tens of Singur (apparently Tata's automobile plant) project-affected women and men supported by hundreds of farmers, laborers; witnessed protest by thousands in the public meeting on the same evening. There is no doubt that 50-60% of land is not sold and majority of the landholders, in thousands, excluding the absentee landlords, are against the compulsory land acquisition and transfer of land, livelihood to the Corporate. Using the British days Land Acquisition Act (1894), not consulting the committees, destroying multiple crop land (which we witnessed), repression that has led to death of one youth and wounding of children and women…much has been questioned by tens of peoples' organizations and many a politician.

The economics, employment generation, transparent deal with Tatas to rehabilitation-policy and practice, too has been looked into and there is a critique of development on each of these. Our report based on the Public Hearing and submissions will soon be ready and available.

However, what is shocking for all of us is the report from the field that:

a) Tens of barracks being put up near village Sanpada and other places in the Singur area a few thousand of policemen to be brought in.

b) There is a plan for forcible occupation of land… whether acquisitioned on paper or otherwise.

c) CPI (M) party cadres, as proposed and asserted by Mr. Binoykumar & others, have marched through the villages, facing some confrontation, who even gave slogans- Buddhadev, lal Salaam & even Tata, Lal Salaam.

All this is not only causing commotion as well as intimidation but is also creating an atmosphere of fear and violence, both.

We request all the Left front Partners who ally with us — in the struggle against SEZ in Maharashtra (through Ajit Abhyankar, CPM and Shri Govindrao Pansare, CPI) land struggle against forcible displacement (through Brinda Karat, AB Barndhan, Abony Roy and others)—to desist from such strategies and not to bring in or withdraw all police force from Singur and don't push the Project, politically or practically without their consent.

Lately, we have also heard of 10,000 MW nuclear Power Plant in Haripur, Cotai to affect thousands of fish workers due to forcible eviction if not with environmental impact on fisheries, land and water. People's protests are at peak and the need is to take immediate cognizance and respected, please.

May I therefore on behalf of NAPM request the Left Front partners through you, the leaders, with all humility, to:

1) review your position on industrialization at the cost of agriculture and agriculturists, projects at the severe cost to fishworkers, rural and adivasi communities,

b) decide not to use either police force or cadre force that always would cause intimidation and even violence anywhere.

c) join us in bringing into being a National Policy and Enactment(policy draft already prepared, presented and approved by Sonia Gandhi led advisory Council) on Development Planning, Minimum Displacement and Just Rehabilitation.

d) hold a serious dialogue with the representatives of people's organizations at the West Bengal state level and at the national level.

I sincerely hope, you will take the issues raised in brief and the protest as also an appeal intended to be conveyed through this letter, for further consideration in your official policy making meetings to follow soon, towards a possibility of a fight against imperialism, at its worst.