The report, as expected, confirms the allegations, ruling out any conspiracy 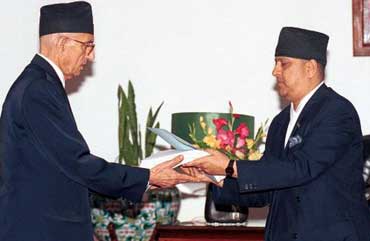 The two-member probe panel set up by king Gyanendra, in its report made public, said a "drunk" Dipendra in army fatigues fired indiscriminately at the royal family members who were relaxing in the billiard room of Narayanhiti palace after dinner on June 1, echoing the eyewitness and other accounts which most Nepalese refuse to buy.

The panel, headed by chief justice Keshab Prasad Upadhyaya, did not say whether Dipendra, who later died in hospital, had shot himself as claimed by an eyewitness and some royal relatives.

The report, released by parliament speaker Taranath Ranabhat, a member of the panel, at a televised press conference, said Dipendra shot his father king Birendra first, then his mother followed by the other royals.

Coming in the backdrop of heightened security across Nepal rocked by widespread violence in the wake of the massacre, the report said Dipendra had "consumed alcohol and smoked cigarettes laced with opium before he walked into the billiard room and gunned the royals."

Before carrying out the killings, Dipendra had made three calls from his mobile telephone to Devyani whom he wanted to marry but his mother was said to be opposed to it.

In his last call to Devyani, Dipendra told her "I am now about to sleep. Good night. We will talk tomorrow."

The weapons used by Dipendra including a nine mm sub-machine gun, a 12 bore french gun, 5.56 calibre rifle were displayed at the press conference attended by nearly 300 local and foreign journalists.

The report did not not give indication to the motive behind the killings.

The 200-page report said Devyani in her telephonic tape-recorded interview to Nepal's envoy to India B.B. Thapa spoke of  "a close relationship with Dipendra."  The taped conservation was used as evidence by the panel.

Her parents told the committee that there was contact between Dipendra and Devyani.

However, Devyani, in her twenties, refused to disclose the details of her conversation with Dipendra saying that "they were matters concerning her personal affair and she did not not want to say anything about them," it said.

The report said during the visit of the site, the team found brain tissues, a few teeth and jaws, red 'tika', two ear pins, broken pieces of red glass bangles and blood stains to be scattered here and there at the place where the queen was shot.

It said that no no cartridge cases were found at the massacre site other than those used by Dipendra.

Giving details of the report, Ranabhat said that the crown prince came for the traditional Friday night dinner at 1930 hours after drinking his "favourite Grouse whiskey". He then asked an aide for cigarettes laced with opium and an unidentified black substance.

He was intoxicated, swaying from side to side and was taken to his quarters in the palace in a drunken state by his bodyguard, his brother Niranjan, prince Paras and another relative, he said.

Dipendra then made a call on his mobile phone to Devyani in Kathmandu. She, in turn within minutes, telephoned some aides of Dipendra telling them that the crown prince's speech sounded slurred and asked "is he somewhat unwell ?".

The aides then went looking for the crown prince and found him sprawled on the ground and trying to take his clothes on the upper part of the body. They helped him in the process and after that he proceeded to the bathroom, it said.

After coming out of the bathroom, he ordered the aides to retire in their respective rooms, the report quoted an orderly as saying.

The report said that all this while, Dipendra moved in and out of billiards room, firing indiscriminately killing the queen, his sister princess Shruti, brother Nirajan, his uncle Dhirendra, the king's cousin prince Jayanti, the king's sisters princess Sharada and princess Shanti and the king's brother-in-law Kumar Khadga Bikram Shah.

The report was made public soon after it was submitted to king Gyanendra who had ordered the probe on June 4 in the wake of large-scale violence by protesters demanding an impartial probe into palace massacre.

During the investigation, the panel relied on statement of over 100 people including eyewitnesses, royal palace staff, firearms and forensic experts and doctors.

The report also coincided with final rituals of Dipendra who died in hospital two days after the massacre of gunshot wounds which he is alleged to have been received.

Detailing the shooting by Dipendra, the report said the crown prince entered the billiard room with a 9mm caliber automatic sub-machine gun and then fired "rat-tat-tat" at his majesty the king.

"All this while, the crown prince moved back and came out of the billiard room, threw the 12 bore French gun near the stairs to the north of the inner garden edge east of the billiard room and then entered the room again aiming the 5.56 caliber rifle with light and telesope and fired rat-tat-tat again" at king Birendra, the report said.

It has been learnt from experts that the sub-machine gun can fire upto 900 bullets per minute and the rifle can send out 700 to 1,000 bullets every minute, it said.

The report said the ADCs heard the sound of firing and the alarm "call the doctors soon..." and entered the billiard hall by breaking the glass of the door to immediately start rescue work.

One ADC entered the hall and carried king Birendra, who was unconscious, to the car and drove to the military hospital where other victims were also rushed by ADCs and security personnel.

A royal ADC and a major found Dipendra lying on his back and gurgling to the south of the small bridge over a little pond at the garden in front of Tribhuvan Sadan where the bedroom of the crown prince was located, according to the report.

During the visit to the site, a 9mm caliber Glock Ges pistol, which Dipendra was said to be in possession, and empty cartridges released from the pistol were found in the water of the pond as also a 5.56 caliber m-16 a2 rifle on a lawn nearby.

Speaker Taranath Ranabhat told reporters that "we have done whatever was possible within the mandate given to us and we have placed before you whatever facts we have found."

The probe panel was to submit its report last Sunday but was given four more days to collect medical and forensic reports.