It would appear Greg Chappell is calling the shots on the issue of experimentation. It's time Dravid asserts himself more and puts an end to all this. 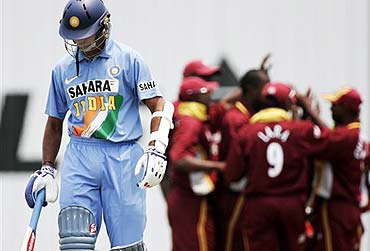 Before I am seen as someone who doubts India's chances in the World Cup, let us get this clear: I view India, alongside Australia and Pakistan as the three best one-day teams in the world. It has the potential to go all the way in the next World Cup. Kuala Lumpur was a hiccup, nothing more or less.

The concerns for me are specific. One of them relates to Virender Sehwag who at all times must be treated as a match-winner. 'Veeru' responds when faith is reposed on him. He performs best when he has an uncluttered mind.

The problem begins when you start cluttering his upper shelf. The only time to show him the cane is when his work ethics are suffering. Otherwise, and I don't think his commitment is an issue, he should stay as an opener. Don't fix it when it ain't broken yet.

In this context, Dravid promoting himself as opener in recent weeks has been a blunder. That's been the best recipe to court disaster. On a venue such as Kuala Lumpur where the ball was doing a bit, it was best adviced for Dravid to stick to the middle order where he is worth his weight in gold.

Dravid would have given the team the stability and solidity they were looking for, especially now with Tendulkar at the top of the order. Instead of making best use of our strengths, we seem intent on devaluing it.

It's time Dravid asserts himself more and puts an end to all this which goes in the name of experimentation. I have always advocated a leeway of a few months to sort out your combinations. But it ought to stop a clear five-six months before the World Cup. That doesn't seem to be happening. It would appear Greg Chappell is calling the shots on this issue. Dravid must draw a line, decide on his team's batting slots and stick to it when the World Cup unrolls next year.

The same is best underlined when we view Irfan Pathan and tear our hair in frustration. Let's make no mistake that the guy has serious talent. But it's now time he starts focusing on his bowling. With the emphasis on his continued presence at the top of the order on the basis of a few meaty scores at number three, he is ending up as neither a batsman nor bowler.

India needs him as a strike force and that priority has been messed around. We had begun to view him as one of the best all-rounders of Indian cricket. At the rate he is going he might be good for a game of rounders at best.

I still feel the impending trip to South Africa and their bouncy pitches should spark Pathan's revival. But for that to happen, he has to go back to his basic strengths. Speaking to legends like Wasim Akram and Michael Holding, Andy Roberts and Jeff Thomson is good enough but he should by now realise what works best for him and which tips are best allowed to pass between the two ears.

I can understand all these experiments if a certain Tendulkar wasn't back and showing the utmost intent of his present mood. Dravid's promotion in that instance could have been useful. Not now when Tendulkar and Sehwag at the top of the order would be a handful for opposition bowlers. As would Dravid, Dinesh Mongia, Yuvraj Singh and Mohammad Kaif/Suresh Raina in the middle order. We have the nucleus, don't turn it into a shuffling pack.

Now that everyone appears to have been seized by bouts of doubt, all kind of theories are being floated around. Some suggest we should have a Plan B if the likes of Yuvraj, Sehwag and Dhoni continue to fail, the World Cup has drawn closer and there is no one else to turn to for redemption. Others are making a full-throated appeal to recall seniors such as Anil Kumble, Zaheer Khan, and even Sourav Ganguly.

For God's sake, please don't run amuck with your magination. Bouts of panic could actually trigger off another round of experimentation and we are all actually quite tired of it, isn't it. We must stick to this squad of 15-16 who have been identified by now.

The accent for the next World Cup would have to be on youth and fitness. You run a check once the winner of the World Cup has been declared and you would inevitably find it to be the best fielding side in the competition.