This was either a simple intelligence failure, or else the Government deliberately chose not to take action on time. It was against this backdrop that the campaign against Biharis intensified, with various unidentified groups involved. The ULFA just 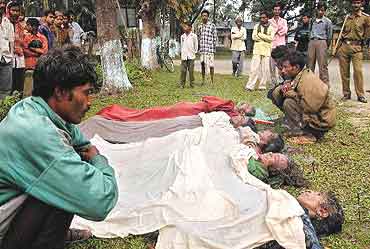 Some of India's worst cases of ethnic and communal violence have taken place in its Northeast. Many of these went unreported. Others did not get the attention they deserved. But the recent attack on passengers from the Northeast, in Munger in Bihar, drew national attention, even edging out news of imminent Legislative Assembly elections in four Indian States.

On November 9, 2003, applicants from Bihar were violently debarred from writing the Railway Recruitment Examination in the Group C and D categories: an examination for posts that requires only senior school academic qualification. There were 2,720 posts and 600,000 applicants. The All Assam Students Union (AASU), a student's body that once spearheaded the Assam agitation in the 1980s, was leading from the front in agitating against Biharis appearing at the examination.

In retaliation in Munger in Bihar, the Brahmaputra Mail, travelling from Guwahati to New Delhi was attacked, detained, people beaten up, women molested. It was a horrific tale of mob violence. Though saner Bihari passengers tried saving their co-passengers, the Railway Police stayed away. Apparently local political heavyweights oversaw the humiliation.

It took a while for people in Assam to react. Only when some of the passengers returned, the stories made the rounds and there was anguish.

There was sufficient time for damage control, but the Government was busy in local body elections in the State, scheduled for December 1. For the student's body, AASU, the issue had come alive, creating new opportunities of another round of agitation, this time on their demand for a 100 per cent reservation in the Group C and D categories in the Northeast Frontier (NF) Railways. But it took on the character of an agitation against the Biharis.

On November 17, the AASU called for a 24-hour general strike. Violence spread, and the AASU lost control over events, or so it seemed. Other organizations progressively established control over the demonstrations and violence. The State Government played it safe by blaming the 'anti-social elements', without naming any group in particular. However, these anti-social elements also included armed groups with automatic rifles, and those capable of hacking people to death. In the next 36 hours, arson and killings stunned the State and made the Centre sit up. The State Government today admits that there had been serious administrative lapses, but denies going soft on the rioters.

What followed were days of confusion, total administrative mismanagement, blaming the media, and general panic, as violence escalated - with the death toll crossing 50 by Sunday, November 23.

But Assam is no more what it used to be in the 70s and 80s, when the AASU agitation brought the State to a standstill. It is, today, much more resilient and mature in its reactions. For the average person on the road, the current wave of violence has been embarrassing. They demanded peace. The issue of reservations is on the backburner. Of more immediate concern was the image of a State that has desperately been trying to make up lost ground.

It is, however, important to go back and read the sequence of events. A railway examination, which could have centres for Biharis in Bihar and Assamese in Assam, ignored the possibilities and potential for disturbance and political disruption. A nightmare of a rail journey, but no official words of assurance or apology, followed by AASU's mobilization of voices of protest.

The violence started in Guwahati, striking right at the capital. Then it spread to Upper Assam and, just as the killings began to manifest characteristics of well-coordinated attacks, Lower Assam started feeling the heat.

If areas where the fire could not be doused were to be identified, these are seen to lie along the Assam Bengal border, Bongaigaon, Nalbari, and areas bordering Bhutan that have been prone to extreme militant activity. The action has been at its worst in the Tinsukia and Dibrugarh districts in Upper Assam, where militancy has been the worst. There is clearly an effort by extremist elements to establish themselves in areas of their first choice, and suggest that the killings and the arson are a well-orchestrated design between the rioters and the militants, a fact that the Government has not denied.

On the morning of November 22, just as the Chief Minister Tarun Gogoi was claiming that the situation had been brought under control, suspected United Liberation Front of Asom (ULFA) militants gunned down another eight people in Tinsukia. The administration suspended police officers including the Superintendent of Police (SP) of Tinsukia and transferred the Deputy Commissioner of the district. But the damage was done. ULFA's message to the three Union Ministers visiting the State on that very day was loud and clear.

To understand the ULFA's motivation, it is useful to look at events back in the year 2000. From Diwali that year, the ULFA went on a killing spree, gunning down more than a hundred people (all Hindi speaking) in the course of four months. The result was widespread fear and a dramatic increase in extortion.

Current developments suggest that, this time round, the State Government was caught on the back foot. There are, in fact, sufficient indications that its inaction was deliberate, mostly the result of reasons political. The ULFA had earlier issued a ban on all Hindi films in Assam from November 15, and there were several signs that it was trying to whip up sentiments similar to its campaign in 2000. Though people defied their present ban, the signals were clear to see.

Surprisingly, the Administration failed to take heed. This was either a simple intelligence failure, or else the Government deliberately chose not to take action on time. It was against this backdrop that the campaign against Biharis intensified, with various unidentified groups involved. The ULFA just joined the party, seeing here an opportunity to create circumstances that will help step up extortion.

In recent months, several business houses, prominently including Hindustan Lever Limited, refused to pay up against demand notes sent by the outfit. Many other establishments followed suit, preferring to face consequences rather than pay up. The ULFA has reportedly set a goal of Rs. 40 million by December this year. Bihari labourers in remote areas are soft targets and killing them acts as a trigger to strike panic among people at large, and particularly the business community.

Meanwhile, even as the violence continues, the blame game goes on. Tarun Gogoi, the Chief Minister of Assam, has blamed the Centre for the lack of adequate Central Forces, claiming that is was the primary cause of the crisis, and claiming that the Centre had no right to blame the State Government for any administrative failure. On its part, the Centre has sent in additional Forces, but most of the killings have been the result of widely dispersed militant strikes against soft targets, which cannot be contained by any number of foot soldiers.

The violence is yet to be contained and, by the Chief Minister's own admission, it will take more than a month to bring back normalcy. By that time, however, a great deal of trust would have been lost. Perhaps a dramatic army crackdown is now the only answer to the wave of violence unleashed by the ULFA.

The Death Of Innocence