The two keep motivating players and are also an integral component in Pakistan's scheme of things in one-day cricket. Their indisposition eliminated the motivation factor and badly disturbed the team combination. 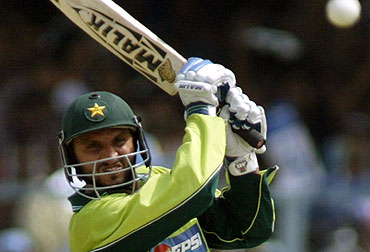 Victory has many mothers but defeat has no father. That seems to be the case with the Pakistan cricket team. The team that was considered as the second best after Australia until the one-day series started against India, is now the prime target while Inzamam-ul Haq, billed as a 'messiah' after reviving fortunes, is now the pariah of Pakistan cricket.

I believe some of the criticism is unwarranted, biased and aimed at settling personal scores while some is justified. Inzamam, rightly so, is in the firing range for a couple of simple reasons and he needs to understand and accept them whole-heartedly. Firstly, he did not score many runs and secondly he did not expose himself as one of the fittest men on the field.

Not scoring runs is nothing to be concerned of because form is temporary and class in permanent. However, fitness is the issue that needs to be addressed very seriously by Inzamam because I am sure he would be the last person who would want to be a liability on the team.

But the fact of the matter is that Inzamam did not look very comfortable in the field as well as while batting that indicated that he might have rushed his comeback after missing the final Test because of back injury.

But if the fielders are showing greasy palms and bowlers spraying all over, I do not think the captain can do anything about it. I went through the annals of Pakistan history and found out that it was the toughest ever home season of Pakistan cricket.

There have been instances when Pakistan have played two home series in a season but one of the two series used to be comparatively easier. But in this case, Pakistan first played against the Ashes winners England and then took on the traditional rivals.

To me, the tough season took its toll on the players and by the time the one-day series was half over, their gas tanks were empty. And Karachi was the perfect example of their approach when they were hoping for things to happen rather than making things happen.

The worst that happened to the Pakistan team was the absence of Shoaib Akhtar and Shahid Afridi.

Notwithstanding that these two characters keep motivating the players and keep their spirits high, they are also an integral component in Pakistan's scheme of things in one-day cricket. Their indisposition not only eliminated that motivation factor but badly disturbed the team combination.

But while saying this, I also believe that complacency and poor game plan also played their part. It's tragic that Pakistan lost and all the grey areas surfaced. When we talk of complacency, I think it was visible in the second one-dayer in Rawalpindi when Pakistan won the toss and elected to bat.

On the face of it, the decision looked correct because the last two games played there had been won by the teams batting first and Pakistan had also beaten India in 2004 while batting first.

Nevertheless, it is not necessary that if the last two games had been low scoring ones, the third would also be like that. Therefore, the team management misread the pitch and let the Indians off the hook. I mean, India had lost the previous game by scoring 328 and had they been sent into bat first at Rawalpindi, they would have been unsure of the defendable target.

The first sign of panic is reshuffling in the batting order. And that is what exactly happened in the third one-dayer in Lahore when the home team sent out Afridi to open the innings and dropped an in-form Shoaib Malik to number four, but he even then justified the captain's decision by scoring a century.

By the time the series reached Multan, the team had come under enormous pressure from the Indian onslaught and professionalism. And there also, they made a mess of things when they announced Imran Farhat as their Super Sub. I have no problems with a specialist batsman being a Super Sub if the strategy is to chase a target.

Karachi was nothing but a walk in the park for the Indians who despite Pakistan's lackluster performance, displayed themselves as a committed, determined and professional bunch of cricketers.

The present looks gloomy but I do not think there are clouds of crisis hovering above. This is a multi-talented team and is excellently gelled together with Inzamam still maintaining his fatherly figure stature. One series defeat cannot take away the achievement of winning everything last year.

It is just about how quickly they learn from their mistakes. Every loser is a winner one day -- Pakistan struggled in 2004 and started winning in 2005.

2006 may not have had a good start but only fools would write off this Pakistan team that has shown its tenacity and ability to fight back when the chips are down. Let us give them some time to regroup and recompose so that they start delivering again.

Before signing off, I just want to touch upon the injury to Shoaib. Isn't it surprising that the player and team management came to know about the degenerative disease of the knee after the series was over because during the series it was the ankle that was being said as the reason for his missing the one-day series.

Now we hear that the injury is career-threatening. The injury is a mystery to me and has led to the emergence of several conspiracy theories of which one is that Shoaib would proceed to Perth from Melbourne to take an additional clearance certificate from the University of Western Australia regarding his bowling action to avoid any controversy on the England tour.

Inzamam Is A Binding Force