'A Crime Against Humanity'

We are at a complete loss for words to express our mixed feelings of shock, horror and outrage at the barbaric and heinous massacre of young girls and boys, along with other innocents in a school at Beslan in Russia. 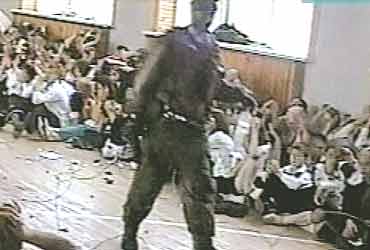 We are at a complete loss for words to express our mixed feelings of shock, horror and outrage at the barbaric and heinous massacre of young girls and boys, along with other innocents in a school at Beslan in Russia. Traumatised as we feel looking at the picture of those tender lives snuffed away so brutally, we can well imagine the grief of mothers, fathers, siblings, relations and other fellow Russians from Beslan and the rest of the country. We have no words but our hearts go out to all of them at this gut-wrenching moment.

Some reports suggest that the hostage may have turned into a bloodbath because of some misadventure or miscalculation on the part of the Chechen rebels or Russian rescue troops. But that cannot take away from the fact that the Chechen rebels and their accomplices alone are responsible for having held hundreds of school children, parents and teachers as hostages in the first place.

We unequivocally denounce the targeting of innocents anytime, anywhere, by any organisation, irrespective of how justified or lofty their cause may be. Only a few days ago, our relief at the release of Indians held hostages in Iraq was mixed with indignation at the killing of Nepalese who were also held as hostages.

Those responsible for the Beslan massacre are guilty of a crime against humanity and must be condemned as such by peace-loving and justice-minded people across the globe. At the forefront of the protest, however, must be Muslim organisations and individuals, for the perpetrators of the dastardly crime claim to be fighters in the cause of Islam, a religion that categorically forbids the taking of even a single innocent life and prohibits the targeting not only of civilians but also their property even in times of war.