'Gangubai Kathiawadi' is directed by Sanjay Leela Bhansali and features actress Alia Bhatt in the leading role. It released in theatres on February 25.

Actress Alia Bhatt starred as the Mafia Queen Gangubai in the recent film ‘Gangubai Kathiawadi’ which released to rave reviews from critics and Bollywood celebrities. Tollywood actress Samantha Ruth Prabhu praised the film on her Instagram account, calling it a "masterpiece."

Prabhu took to Instagram to express her admiration for Alia Bhatt after seeing her most recent film. She penned, “#GangubaiKathiawadi A masterpiece !! @aliaabbhatt Words aren’t enough to describe your performance. Every single dialogue and expression will be etched in my mind forever.” 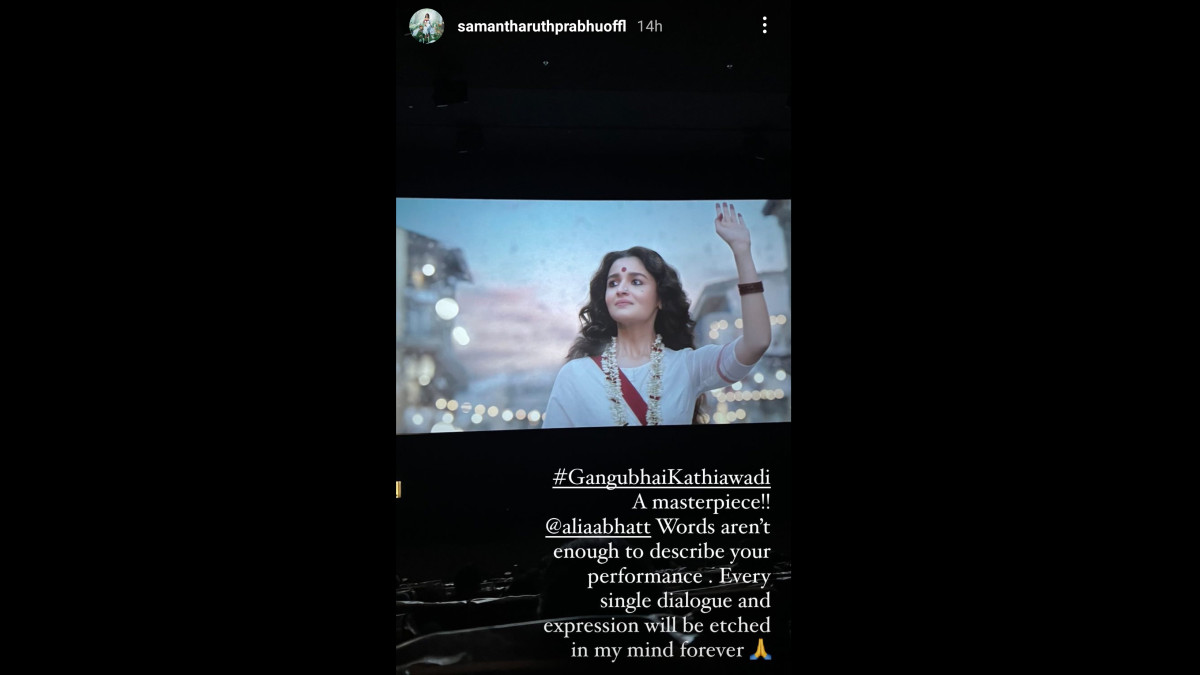 Bhatt's performance was described as "brilliantly disturbing" by Seal, while Kashyap shared a news article describing Bhatt as "the best actor in commercial cinema," with the caption "Word."

Actor Vicky Kaushal, who worked with Bhatt in 'Raazi', had previously expressed his admiration for the actress’s performance in ‘Gangubai Kathiawadi’ on his Instagram stories.

Bhatt and Bhansali have worked together for the first time in ‘Gangubai Kathiawadi’. The film is based on a chapter from the book Mafia Queens of Mumbai by author Hussain Zaidi and is set in the background of Kamathipura, a red-light district in Mumbai. Actors Ajay Devgn, Vijay Raaz, and Jim Sarbh are among the other actors who appear in the movie.

Prabhu is currently filming 'Yashoda,' a science fiction thriller. Actors Varalaxmi Sarathkumar, Unni Mukundan, Rao Ramesh, Murali Sharma, and Sampath Raj, among others, star in the film, which is directed by filmmaker duo Hari and Harish.

'Shaakuntalam' and 'Kaathu Vaakula Rendu Kaadhal' will also feature the actress in lead roles. 'Arrangements of Love,' directed by Philip John, will be her second foreign film which is based on a book.