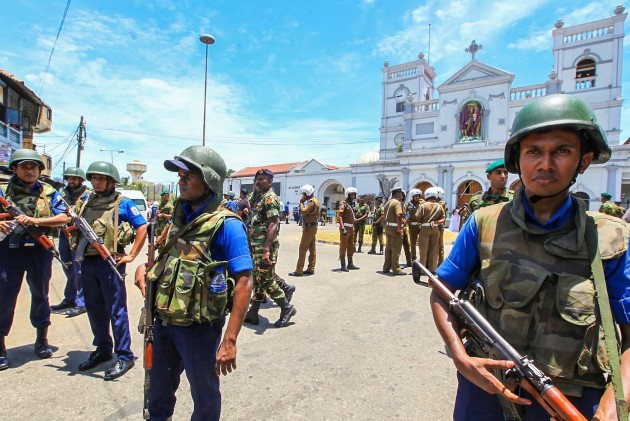 The President had demanded the resignation of Jayasundara after accusing him and former Defence Secretary Hemasiri Fernando of failing in their national security duties.

Sirisena has also appointed former IGP, N. K. Illangakoon as Advisor to the Ministry of Defence.

The attacks came in spite of early warnings and the security establishment's failure to take preventive action has come under severe criticism.

Deputy Minister of Development Strategies and International Trade Nalin Bandara said a motion to remove the police chief will be tabled in Parliament within this week.

Meanwhile, Jayasundara has said that he has done nothing wrong and that he would resign if the defence minister resigns as well.

Nine suicide bombers carried out a series of devastating blasts that tore through three churches and three luxury hotels on the Easter Sunday, killing 253 people and injuring over 500 people.

Sri Lanka on Saturday banned the NTJ and a splinter group linked to the ISIS.

According to Sri Lanka's Foreign Ministry, the number of foreign nationals who have been identified as killed remained at 40, including 11 from India.

In a related incident, the wife and child of terror ring leader Mohommad Zaharan Hashim are among the people rescued during a military operation in Kalmunai on Friday night.

It was reported that Abdul Cader Fathima Sadia and 4-year-old Mohomed Zahran Rusaina had been rescued by the military from a house in Kalmunai, Colombo Gazette reported.

At least two explosions had taken place in the house before the Police and military were confronted by armed gunmen on Friday in the area.

A gun battle later saw two suspected militants being killed. In all, 15 people were killed in the Kalmunai incident.