The Virtue Of Unilateral Virtue

Should the USA and its allies be celebrating the apparent success of the Northern Alliance, forgetting all about its past heinous record of atrocities? 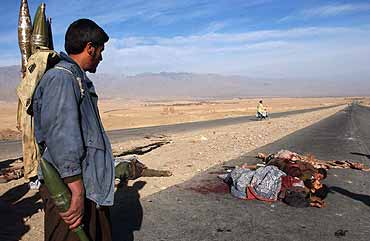 This lesson must surely not have escaped Mr. Brzezinski on September 11. It was early 1998. In an interview to a French newspaper Le Nouvel Observateur, the National Security Adviser to President Carter, Mr. Zbigniew Brzezinski boasted about his role in sponsoring the Mujaheddins in Afghanistan in the seventies. Part of the idea was to 'invite' the then Soviet Union into the trap of Afghanistan. The trap netted an unintended victim too – the US itself.

The planes that crashed into the WTC on September 11 did not just destroy concrete structures. They demolished the delusion that consequences that one cannot foresee are, simply, inconsequential.

The sooner this is realised, the easier it would be for the US to grasp the chain of consequences it has set in motion with its campaign of bombing of a nation whose citizens did not participate in the atrocities on September 11.

By sheer dint of repetition, the claim that America won the cold war had come to be accepted and allowed the nation to straddle the globe as the lone superpower. Think again. Did America really win the Cold War?

Is it possible to claim victory in a war when the warriors armed by the king come back to claim 6000+ lives in his own soil?

Would the men and women who decided to arm the Mujaihideens in the US about 21 years ago have visualised that their decisions would return as fully loaded planes headed for the World Trade Centre in New York and the Pentagon and god knows where else?

It requires a certain measure of humility to recognise limits to human rationality. Such humility would not view interaction among nations as conquests to be won - either in the battlefield or in the economic arena. It would seek common elements in individual successes at different points in history.

Claims of economic invincibility based on performances that last barely half a decade are easily reversed. They were reversed in the nineties for Japan and they might well reverse for the US this decade. The signs are already ominous. In any case, celebration of such ephemeral triumphs breeds only frustration.

The keenness to declare instant victories on (imaginary) contests that transcend time has given rise to a cottage industry in indices/indicators of international competitiveness that are flourishing. They should be urgently relabelled.

Nations do not compete. Nations prosper and allow their citizens to prosper if they have appropriate policies, institutions and infrastructure. Hence, we should have 'prosperity' indicators and not 'competitiveness' indicators.

Resources that nations seek from one another (e.g., foreign investment) are only means to the end  - prosperity for themselves and their people. Competitiveness indicators merely breed unhealthy (and sometimes, plain wrong) comparisons, jealousy and gloating. Irrational action - economic or military - is the inevitable consequence.

People already living in the fringes of society find themselves completely forgotten in the resulting misery and they then choose to remind us of their existence in their own ways. It would be too late to regret then.

If there is one good that the murderers of September 11 did, it is to deliver the message that victories that nations declare over others are not frozen in time. They are reversible. The death of 6000 innocents has reversed the Pyrrhic victory of the Cold War.

The path to a better world is paved with micro changes in our behaviour whose impact may not be immediately evident. Surely, just as viciousness returns in some form, virtue would too. This is the cosmic law of cause and effect. Hindus call it the law of Karma.

But, as Bill Clinton talks of a nation paying a price for its past mistakes dating back thousand years and, as Pakistan fears the revenge of the child that it created and abandoned now, the law becomes universal. If more people could relate their past to their present experiences and draw the right inferences, the world would be a safer place for our children.

(Dr. V. Anantha-Nageswaran is an economist working for an international financial institution in Singapore. These are strictly his personal views)