So George W. Bush wants elections in Afghansitan in September? Or does he actually just want to use the image of a 'stable' Afghanistan to improve his foreign policy score card before the November US presidential elections? 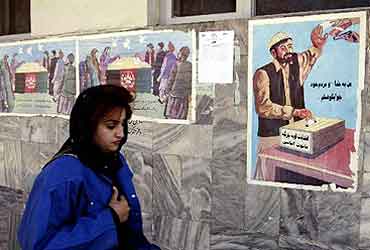 The killing of four US special forces members in late May when their Humvee hit a landmine brings the total American casualties in the Afghan conflict to at least 89. Adding that to the deaths of over 350 Afghan soldiers and civilians in the past five months by a resurgent Taliban and Al'Qaeda, the continuing violence in Afghanistan has raised serious doubts whether the first free elections planned for September can be held on time. A delay, however, would disappoint not only the war-weary Afghans but also US President George W. Bush, who is hoping to showcase the elections in Afghanistan as part of his foreign policy successes.


Aside from the violence, the factors working against smooth Afghan elections in September are many:

''I am seriously concerned at the prevailing security situation in the country,'' said Francesc Vendrell, the European Union Special Representative in Kabul. ''The lack of security for the elections is just one of many concerns,'' he added.

On Monday, May 24 the police chief of the eastern province of Paktika was killed in a Taliban ambush in which eight other Afghans were also killed. During the previous weekend there were three separate Taliban attacks in three provinces that left several Afghan soldiers dead.

The spate of violence has dramatically curtailed reconstruction projects and NGO activity in a swathe of provinces south and east of Kabul. Much of Zabul province, which borders Pakistan, is in the hands of the Taliban day and night, according to a Western NGO official based in southern Afghanistan. ''Neither the Americans nor Afghans troops have made any effort to seal the border, from where most of the Taliban-Al'Qaeda incursions into the south are coming,'' the official said.

Political preparations are also suffering. The elections in September are expected to vote in President Hamid Karzai and legitimize the political process begun after September 11, 2001. An election law is due to be passed, but there is widespread disagreement on its legitimacy. More than a dozen political parties have already registered to contest the elections.

The UN, charged with supervising the elections, has so far registered only 2.5 million Afghans out of a total of 10.5 million expected to vote in September. The lack of security in the south makes it unsafe for UN voter registration teams to operate there. So far only 446 UN registration sites are operating in the country, whereas 4000 are needed before September.

Despite these challenges, the Bush administration is desperately keen that Afghan elections take place in September, and it has invited President Hamid Karzai to meet with President Bush on June 15 at the White House. However, the visit is already mired in controversy. Some aides to Karzai have advised him not to make the trip at this time, with the US so unpopular in the Muslim world, the controversy over abuses against Afghan and Iraqi prisoners by US jailers, and the Pentagon's refusal to allow Afghan human rights officials into US run jails in Afghanistan. Aides fear that Karzai's visit will be used as a photo opportunity by Bush, who could use the image of a 'stable' Afghanistan to improve his foreign policy score card before the November US presidential election.

For Bush the Karzai visit will also raise the embarrassing question about what happened to the pledge by US commanders to catch bin Laden this year. In February the 16,000-strong US-led coalition forces, who were reinforced with 2,200 US Marines in April, announced with much fanfare a major offensive to crush the Taliban and capture bin Laden.

US generals had said the terrorists would be crushed between ''the hammer'' of US forces in Afghanistan and ''the anvil'' of Pakistani forces on their side of the border. However, after suffering more than 150 dead in operations in March and April against pro-Taliban Pashtun tribesmen, the Pakistani military is now trying to appease the tribesmen. President Pervaiz Musharraf is caught between trying to appease both an angry Washington and his own reluctant army and intelligence services, which see him as leaning too close to the Americans. What's worse for the US, bin Laden is still on the loose.

The US has also failed to mobilize the Europeans. NATO, which took over control of the International Security Assistance Force (ISAF) last August, has failed to deliver more promised troops and equipment so that ISAF can take greater control of security across the country before the elections. NATO Secretary-General Jaap de Hoop Scheffer told NATO ambassadors in Brussels in mid-May that the alliance had failed to commit enough resources to its Afghan mission and was ''flirting'' with failure.

At the same time, a $300 million UN-Japan-Afghan government plan to disarm 60 percent of the 100,000-strong militias controlled by warlords before the election is floundering badly. Some of the most powerful warlords are refusing to disband entire military units – a key UN demand – rather than just downsize their units. "As someone who has consistently stressed the importance of national elections in Afghanistan as the only way to provide legitimacy to a new government, I am troubled at the prospect of elections held in the absence of disarmament and in an insecure political environment,'' said Vendrell.

Disarmament before elections are held is also a key demand of the majority of Afghans. Warlords have unleashed a wave of crime, kidnappings, extortions in the north and west of the country where the Taliban are not active. ''Elections that ended up legitimizing the current power holders in Afghanistan would lack credibility among the Afghan public, and rather than being the culmination of the [peace] process started in Bonn, could mean a serious setback to it," Vendrell cautioned.

On top of this, there has been no effort to deal with the burgeoning drug problem. This summer, in 28 out of 34 provinces, farmers are harvesting what is expected to be the largest poppy crop in the history of Afghanistan, which last year supplied 75 percent of the world's heroin.

''The only good point is that in some areas there is a fungus which may reduce the harvest, but otherwise poppy is everywhere,'' says an official working with the European Union's anti-narcotics campaign. The Pentagon has refused to allow US troops to interdict drugs shipments or help the beleagured government carry out eradication campaigns. Over the past few months that has led to a sharp exchange between the Pentagon and the State Department, which is demanding a larger role by the US to deal with the drug crisis.

Amidst the accumulating trouble in Afghanistan, it may provide cold comfort to President Bush that his initial reluctance to engage in nation-building ventures abroad may have had some merit. Nation-building is shaping up to be an open-ended commitment not liable to be fitted into an election calendar.

'Simla Agreement ... Has Been The Bedrock Of India-Pakistan Relations Since July