It's business as usual for the Pakistan foreign minister as he sticks to the old Pakistani line. 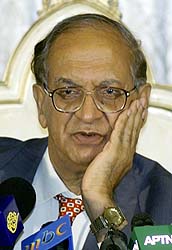 Pakistan has said it will not agree to any proposal to freeze the Line of Control (LOC) without finding a solution to the Kashmir issue during the proposed summit between prime minister Atal Bihari Vajpayee and military ruler Gen Pervez Musharraf.

Answering a question relating to the status of LOC, foreign minister Abdul Sattar told the daily 'The News' the "status quo is the problem. It cannot be a solution."

The Line of Control resulted from the ceasefire of december 17, 1971, and was so described in the Simla agreement of 1972, he said.

Sattar said the LOC, which had a 30-year-long history, was presently quiet as Pakistan had taken a unilateral decision to withdraw its troops from the area, which, he added, it continued to honour despite the calling off of the ceasefire in Kashmir by India.

Asked to explain what Musharraf meant by stating that he would demonstrate flexibility during the proposed talks with Vajpayee, he said "we will be going to the New Delhi meeting with an open mind and with the intention of making the summit a success. We hope the Indian side will also have the same approach."

To a question on what could be a possible solution to the Kashmir problem, Sattar said the solution had been identified 50 years ago.

"The Kashmiri people have to be allowed to exercise their right to self-determination. This is their birthright. It was pledged to them by Pakistan and India, and by the international community in UN security council resolutions," he said.

He said the All Party Hurriyat Conference was an "active and effective political force."

"It favours improvement of relations between Pakistan and India. For the realisation of that objective, it has pointed out that settlement of the Kashmir question requires respect for the views of the Kashmiri people," he said.

To a query on the recent assertion by external affairs minister Jaswant Singh that Jammu and Kashmir was an integral part of India, Sattar said "an attempt to impose a solution by force is inconsistent with the norms and principles devised by the civilised community in the UN charter.

"Ten million people of Kashmir have demonstrated their resolve to resist occupation and denial of their fundamental rights. The issue should not be looked at in territorial terms. It involves issues of fundamental human rights and implementation of UN resolutions," he said.