Gandhi called him 'abhay sadhak'-- a fearless seeker of truth and his mission to win a life of dignity for victims of leprosy went against the very grain of society which treated the leprosy-afflicted as untouchable outcastes. 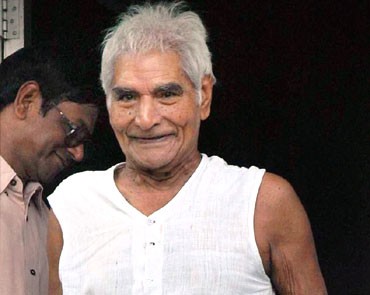 When I read about the passing of Baba Amte, a lone memory of the day I met him at Anandwan in September 2005 resurfaced in my mind. Baba was lying down in bed as usual, afflicted as he was by severe cervical spondylosis which had caused a progressive degeneration of his spine. As I approached him, he warmly held out his hand. Holding mine with a firmness replete with affection, he enquired about me with genuine curiosity. His wife Sadhanatai expressed humble surprise when she was told that I had come with the express purpose of visiting Anandwan. The couple welcomed me with hospitality and invited me to spend a few memorable days there. In the short time before I took my leave, Baba had already carved a place for himself in my mind, not only as the great humanitarian Baba Amte, but as a down-to-earth, warm human being who had befriended me within the span of a few minutes.

More than two years later, the news of Baba's death brought back to mind the myriad courageous endeavours which this nonagenarian undertook during the course of his unique life lived with a firm conviction. Murlidhar Devidas Amte defied the meaning of possible. When Baba first saw the 50 acres of rocky wasteland infested with brush, snakes and scorpions granted by the government to his organization--the Maharogi Sewa Samiti which served leprosy patients--this is what he told his wife Sadhana. "Perhaps it was symptomatic that there was nothing but a tangle of boulders, roots and creepers. Outcaste land for outcaste people. This is our lot from now on."

Soon, Baba and Sadhana along with a few patients began to build a leprosarium near Warora in north-eastern Maharashtra. This place, Anandwan, would go on to offer shelter, care, work and, most importantly, dignity, to its many residents in the decades which followed. Baba's biographer Neesha Mirchandani writes that though the story of the building of Anandwan sounded romantic looking back, Sadhanatai assured her that there was nothing romantic about hunger or fear. The early days at Anandwan, according to Sadhanatai, were brutal. Leopards took the Amtes' lone dog away. Their shelter consisted merely of wooden pillars and a thatched roof. Half a dozen leprosy patients along with Baba broke through the hard rock to dig the first well in six blistering summer weeks. In June 1951, Anandwan was officially inaugurated. Ever since, Baba Amte--a tireless soldier of 'creative humanism'--had marched on. Anandwan flourished into a beautiful, co-operative community of the leprosy-afflicted and disabled, with hospitals, schools, colleges, residential communes and agricultural land among other multifarious initiatives.

At the age of 50, Baba was diagnosed with severe cervical spondylosis which caused a progressive degeneration of his spine resulting in agonizing back pain, and forcing him to stay in bed. But the courageous crusader was not one to be cowered down by physical pain, however excruciating or debilitating. In 1973, about a year after undergoing surgery, Baba began work on health among the Madia Gond tribals in the thick forests of Hemalkasa about 350 kilometres south of Nagpur. In 1974, his younger son Prakash and daughter-in-law Mandakini took over the responsibilities of the work at Hemalkasa which today benefits 40,000 tribals a year. Older son Vikas and daughter-in-law Bharati managed and developed Anandwan, leaving Baba to pursue a wider agenda.

Throughout his extraordinary life, Baba stood firmly and compassionately behind the poor, the disabled, and the downtrodden in every way he possibly could. During his years in Warora, he had helped start several unions of sweepers, scavengers and weavers. As the president of the sweepers' union, in order to experience their difficulties himself, he had cleaned toilets for nine months, carrying the night soil in baskets. Now after the success of Anandwan and Hemalkasa, Baba turned his attention to the Bhopalpatnam dam on the Indravati and the Inchampalli dam on the Godavari, which would inundate prime forest and uproot tens of thousands of Madia Gond adivasis without rehabilitating them. Baba's leadership and activism in 1984 played a significant role in the scrapping of the two dams, thus saving the Madia Gonds from unjust displacement and destitution.

Later in 1988, Baba invited leading environmental activists from all over the country to discuss the subject of big dams. The group issued the 'Assertion of Collective Will against Big Dams', also known as the Anandwan Declaration, which emphasized that the benefits credited to big dams never materialized in reality, and that such dams uprooted and impoverished millions of people. This declaration became a milestone in the rising movement against big dams.

His politics on behalf of the poor and oppressed led Baba to the banks of the Narmada, to throw his moral weight behind the Narmada Bachao Andolan (NBA), the movement of the tribals and farmers who are being uprooted by the Sardar Sarovar dam. This dam will displace more than three lakhs people, impair the livelihood of thousands of others, and damage the environment in fundamental ways. To buttress the movement of the displaced, Baba left the home he had crafted and nurtured at Anandwan for several decades, and resolutely moved to Kasravad, a small quiet village on the banks of the Narmada, at the ripe age of seventy-five. Baba's leadership of the momentous Long March of the NBA from Rajghat Bridge near Badwani in Madhya Pradesh to the site of the dam in Gujarat 200 kilometres away, symbolizes his invaluable contribution to the NBA-- one of the most significant movements for social justice in modern Indian history. It was this Long March, halted by the Gujarat government at the state's border at Ferkuwa, which brought the NBA to the forefront, making it a national phenomenon which could no longer be ignored.

Much has been written about Baba's kindness and compassion, but let us not forget that he was a man of steely determination and resolute courage, who defied both society and state in his pursuit of truth and justice. His mission to win a life of dignity for victims of leprosy went against the very grain of society which treated the leprosy-afflicted as untouchable outcastes. Also his crusade against big dams challenged the state and forced its attention towards the tribals and farmers who were being meted out injustice in the name of development. This extraordinary 'abhay sadhak'--a fearless seeker of truth--as Gandhi called him, will live on in our minds for the good life he lived.