The arms control and non-proliferation wallahs cutting across party lines are already up in arms against amending US laws to implement the nuclear agreement. The Indian American community has its work cut out. It is time to call in the IOUs. 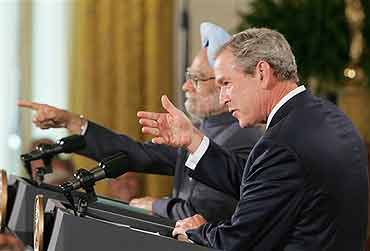 They are no longer just empty words or high rhetoric on shared values of democracy. President George Bush and Prime Minister Manmohan Singh have given considerable content to Indo-US relations, wrested the two countries away from the weighted past and boldly thrust them into the myriad possibilities of the future. India and the US will not be two great ships passing each other in the night, but two countries engaged intelligently on the global stage. Their relationship will be a new anchor of the international system.

Manmohan Singh’s visit to the United States was no ordinary foray but a broad-brush stroke, which paints over old shadows and creates new outlines. His three days in Washington broke three decades of stereotypes and put the two countries on a more equal footing. The outcome -- India will no longer be treated as part of the problem but as part of the solution.

The nuclear bargain under which the US recognized India as a de facto nuclear weapons power with all the rights and advantages in exchange for India taking on international obligations similar to those of the five nuclear powers is a big deal. Bush has discarded the sacred rules, passionately internalized over the years by America’s vast army of policy wonks, opinion makers and politicians who see no reason to give India exceptional treatment. For them, the old nuclear order, which gives only five countries the right to possess nuclear weapons, has divine primacy -- no matter what the global realities, India’s unique situation, its superb record in protecting nuclear technology and its bristling  neighbourhood of missiles and run-away nukes.

But Bush and his advisers see that tomorrow’s world can’t be run by yesterday’s rules. Still, the sheer chutzpah required for the "nuclear sacrilege" on the scale this deal demanded was enormous. Only the "bring-them-on" Bush could have done it. It had to be a political decision and forcefully articulated or the bureaucrats would have simply tucked away the idea in the "don’t do" drawer. They pretty much did that in Bush’s first term, stripping the meat away from the grand idea of the strategic partnership. Extreme bureaucratic reluctance, a Colin Powell who trusted uniforms in Pakistan more than the free-wheeling khadi-clad crowd of India and a constantly insecure Islamabad ensured back burner treatment for India in Bush’s first term despite presidential desires.

It finally took a woman to cut through the fog of distrust, put down the rebellion in the ranks and march ahead on the India front. Condoleezza Rice, who took over from Powell as secretary of state, was a believer, not a prisoner of policy positions sent up by mid-level officials. She got along better with the Indian side right off the bat. She found them easy and enjoyable, comfortable to be around unlike Powell who was never at ease in New Delhi. Perhaps, he wasn’t allowed by his bureaucracy to step out of line. But Rice quickly established rapport, went laser-like to the core of the problem and delivered the goods with aplomb. She didn’t allow Pakistani carping to become a veto, brought the non-proliferation officers in line and reversed US policy. No wonder the "Condi club" has many Indian admirers, right from external affairs minister Natwar Singh on down. It helps when the principals get along and establish trust – there is less chance for mischief.

But there is trouble ahead. The Indo-US nuclear agreement has the arms control and non-proliferation wallahs up in arms. Strobe Talbott, President Clinton’s deputy secretary of state whose mantra was to "cap, rollback and eliminate" India’s nuclear programme, called the nuclear deal "short-sighted," adding that it would create "a more dangerous world. " But will it? Bringing India, which has never proliferated, into the mainstream of decision making gives the US a valuable new ally as it battles various global problems including nuclear proliferation. But the Clinton crowd won’t understand. They are the people who, after India’s 1998 nuclear tests, made the monumental error of issuing a warning to India, of all places, from Beijing. This after they coolly leaked the "letter of explanation" by former prime minister AB Vajpayee in which he had named China as a reason for the tests. Bill Clinton himself, for all his love for India, has confided to friends that he doesn’t consider India in the "same league" as China.

The Bush folks do, and therein lies the difference in approach. They have not blessed India’s nuclear weapons but taken cognizance of its massive energy needs which can partly be fed by nuclear energy. If India is to be an engine of growth, it must find answers somewhere. Bush sees the need to have India on America’s side. In some ways he sees a certain inevitability in Indo-US relations as the geo-political tectonic plates shift. American commercial interests are a big part of the puzzle. Pentagon is quietly spreading the word that India will buy big ticket items in the future. The language of money will be important to politicians with arms factories in their constituencies.

But there still will be plenty of critics of the N-deal. Some have already come out in force ready to flood Capitol Hill as the Bush Administration begins the hard work of amending US laws to implement the nuclear agreement. It won’t be easy and a good amount of political capital will be spent on making it stick -- non-proliferation is a passion that cuts across party lines. Although a Republican majority in the House and Senate is helpful, it may not be sufficient to break the orthodoxy. The leanings of the India Caucus in the House of Representatives and the Senate Friends of India are not clear and can by no means be taken for granted. This is where the Indian American community comes in. It finally has a cause around which to rally and get some bang for the bucks it has been donating to political campaigns. As the prime minister candidly said, "You have your work cut out for you."

It is time to call in the IOUs. Groups such as USINPAC must show if they have learnt anything about strategy from the Jewish lobby they so ardently emulate. The Indian American community of the Silicon Valley moghuls, of the powerful doctors, of the rising second generation stars can use its political clout to push the process forward. And rather than build another temple, the community can spend money to build the edifice of this new relationship.

Terrorist Link Between Egypt And Pakistan