In light of the severe reverses suffered by the LTTE in the East, there are apprehensions that the outfit will bring the war to the capital city and target both civilian and government establishments. 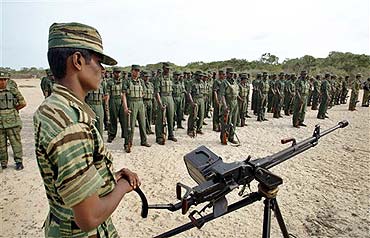 A day after President Mahinda Rajapakse declared that the military had captured Thoppigala, the last remaining pocket of influence of the Liberation Tigers of Tamil Eelam (LTTE) in the East that has been under its effective control since 1994, the outfit warned that it is aiming to cripple the country with major attacks on military and economic targets. In an interview on July 12, 2007, the LTTE political wing leader, S.P. Tamilselvan, declared,

The capital city of Colombo has long been a target of LTTE terrorist strikes, and is a natural object for this strategy of economic attrition. In light of the severe reverses suffered by the LTTE in the East, consequently, there are apprehensions that the outfit will bring the war to the capital and target both civilian and government establishments. The government has, therefore, not only beefed up security to defend its forward defence lines in the operational areas, but also all potential political, military and economic targets in Colombo. In fact The Nation reported on July 1, 2007, "Never before have security checks being so stringent in Colombo and the suburbs than during this past year."

According to Institute for Conflict Management data, while 10 persons--seven civilians, one security force (SF) trooper and two terrorists--were killed in 2005 in Colombo, the number of casualties increased to 50--25 civilians, 17 SF personnel and eight terrorists--in 2006. As on July 2, 2007, the death count for the current year was already 21, including 13 civilians and eight soldiers.

The first major LTTE attack in Colombo dates back to July 24, 1995, when 70 persons were killed and approximately 600 others injured as the LTTE bombed a passenger train. On January 31, 1996, 91 persons were killed in a truck bomb attack on the Central Bank of Sri Lanka. Later, on October 15, 1997, 18 persons were killed as LTTE suicide bombers drove a truck packed with a large quantity of explosives into the twin tower World Trade Centre building.

The first major incident recorded in Colombo after the 2002 cease-fire agreement (CFA) was on July 7, 2004, when a suspected woman LTTE suicide bomber blew herself up at the Kollupitiya Police Station next to the Sri Lankan Prime Minister's official residence killing herself and four police personnel and injuring nine persons. Again, at least two persons were killed and 15 others wounded in a bomb blast at the end of a concert by Shahrukh Khan in Colombo on December 11, 2004. The August 12, 2005, killing of the then foreign affairs minister, Lakshman Kadirgamar, near his private residence on Bullers Lane was the first major political assassination after the CFA.

2006 witnessed a significant spurt in violence in Colombo. On April 25, 2006, the Army Commander, Lt. General Sarath Fonseka, was injured while eight persons were killed when a female suicide cadre of the LTTE, disguised as a pregnant woman, blew herself up in front of the military hospital inside the Army Headquarters. The attack on the Army Commander, many believe, and this was recently admitted by the Sri Lankan government, really transformed the state’s policy towards the LTTE, tilting it towards a final assault against the rebels. Defense spokesperson and Minister Keheliya Rambukwella stated, on July 4, 2007, that, despite the LTTE’s highly provocative acts since the first Geneva talks in February 2006, the government did not fire a single shot or violate the truce until the abortive attempt on Fonseka’s life; "Only then did the government make a shift to use its military power, targeting the terrorists if national security is threatened."

A suicide bomber killed the Sri Lanka Army (SLA) Deputy Chief of Staff, Major General Parami Kulathunge, the third highest appointment in the SLA, and three others, at Pannipitiya, a Colombo suburb, on June 26, 2006. Kethesh Logananathan, Deputy Secretary-General of the government's Secretariat for Coordinating the Peace Process and a former Eelam People's Revolutionary Liberation Front member, was shot dead by unidentified gunmen near Vandervet place in Dehiwela on August 12, 2006. On December 1, 2006, in another suicide attack, the LTTE targeted the Defence Secretary, Gotabhaya Rajapakse, who is also the brother of President Mahinda Rajapakse, at Dharmapala Mawatha, killing two soldiers and injuring 12 persons.

On March 26, 2007, the LTTE carried out their first ever air attack on the main Sri Lankan Air Force base in Katunayake at Colombo, killing three Air Force personnel and injuring 17. A light wing aircraft manned by the outfit dropped two bombs near the engineering section of the base. There were no damages to the fighter jets stationed at the Air Base. This, incidentally, is the same Air Base which a 14-member LTTE suicide squad attacked on July 24, 2001, destroying 11 aircraft and damaging three.

Again, on April 29, 2007, an LTTE aircraft bombed oil and gas storage facilities in and around Colombo. One of the two bombs dropped on Shell’s Muthurajawela Gas Storage Facility caused minor damage to the fire guard equipment while the other damaged the water supply. The two bombs dropped on the Kolonnawa Oil Storage Depot failed to explode.

On May 24, 2007, a suspected LTTE suicide bomber on an explosive-laden motorcycle rammed a bus carrying Army personnel on the First Cross Street in Colombo, killing two soldiers and wounding five persons. And on May 28, 2007, seven civilians were killed and 42 persons, including 36 civilians, sustained injuries, in an LTTE-triggered claymore mine explosion at Belekkade Junction in the Rathmalana area of the capital.

On June 1, 2007, Police seized a truck destined for Colombo, with 1,052 kilograms of C-4 explosives hidden under a pile of coconuts, at a Police Checkpoint in Kurunegala District. Later on June 10, Prime Minister Rathnasiri Wickramanayaka disclosed that the LTTE had sent another truck with over 1,000 kilograms of explosives into Colombo.

Amidst all these developments, the Colombo Police on June 7, 2007, started eviction of Tamils from the capital as part of a crackdown against the LTTE. 376 Tamil men, women and children, lodged in low-budget hotels, were forced out of their rooms, ordered into buses and driven off under armed escorts. Rohan Abeywardene, Inspector General of Police (IGP) for Colombo, later said the ethnic Tamils were being sent back to their own villages for their own safety amid a series of abductions blamed on state security services and the LTTE, and to avoid insurgents infiltrating the capital. On June 9, IGP Victor Perera stated that recent events had shown that the LTTE terrorists were operating without much difficulty in Colombo. The government later apologized for the involuntary deportation of the Tamils, after the Supreme Court stepped in and criticized the move.

Police sources have revealed that lodges in the Wellawatte, Bambalapitiya, Messenger Street, Pettah and Wattala areas of Colombo have provided safe havens to the LTTE. In Pettah alone, there are 68 lodges, owned by Tamils and catering to fellow Tamils from the North-East and from the tea plantations in Central Sri Lanka. Pettah is the city's main wholesale market and, traditionally, it has had a strong Tamil and Muslim presence. Tamil sources say that, on any day, there would be at least 5,000 Tamils from the North-East in the lodges in and around Colombo. Reiterating the allegation that the lodges were being used by the LTTE, defence spokesperson Keheliya Rambukwella said on June 26, "The primary investigations have revealed that the chief suspects of the Rajagiriya bomb case was residing in a lodge in Colombo. Experience in the past 10-years shows that LTTE operatives use the lodges in the city to stay and plan out terrorist strikes." He also disclosed that 90 per cent of the recent terrorism-related incidents in and around Colombo were hatched in these lodges.

Although the government initially backed the Police action against the Tamil residents, it eventually had to retract following the Supreme Court’s interference on June 8, when the Court issued an injunction directing the Police to stop the evacuation of Tamils from Colombo’s lodges. Responding to a fundamental rights petition filed by the Centre for Policy Alternatives, the Chairman of the panel of Judges, Nimal E. Dissanayaka, said that the action was based on wrong advice. Subsequently, Prime Minister Wickramanayaka, on June 10, expressed regret over the eviction of Tamils from Colombo. Further on June 15, President Rajapakse, while regretting the eviction, stated further that the government had to keep extra vigil over the lodges since almost all suicide bombers had operated from these.

It is not only the upsurge of violence in Colombo, but also the rampant occurrence of abductions and disappearances, which have attracted the government’s attention towards the grim security scenario in the capital city. For instance, two Tamil members of the Red Cross from the east were abducted in the presence of their colleagues at Colombo’s main Fort Railway Station and their dead bodies were later recovered in the Kiriella area in Rathnapura District, far to the South East of Colombo.

The LTTE has, unsurprisingly, developed a deep network in Colombo and its suburbs. Colombo’s demographic composition with its large base of Sri Lankan Tamils, Hill country Tamil (Tamils of Indian Origin) and Muslim Tamils makes it relatively easy for the LTTE to infiltrate the city to carry out their subversive activities.

On June 4, 2007, the government introduced a new security plan for Colombo city, dividing the capital into three security zones. Additional troops from the SLA and the Sri Lanka Navy (SLN) have been deployed to check all vehicles and movement of civilians. Anti-aircraft guns have reportedly been fitted on top floors of about 58 storied buildings in Colombo to counter an LTTE aerial strike. Each key junction in Colombo is to be manned by SLA and SLN troops. According to Sunday Observer, many of the sleeper LTTE cadres waiting in Colombo and suburbs have had to flee the city, as they feared being arrested with the intensified surveillance in an around the capital after the revelation that many suicide cadres were waiting in the capital, disguised as Muslims, while engaged in various jobs under false identities. "Investigations revealed that the suicide cadre who made an attempt on the life of Defence Secretary Gotabhaya Rajapaksa lived in Colombo for many years, disguised as a Muslim three-wheeler driver."

Despite these new measures being taken, it will be an uphill task for the Security Forces to completely secure Colombo, as the increasingly beleaguered LTTE will certainly intensify efforts to strike at the heart of the country in order to draw attention of the international community. Such efforts are also intended to provoke the government to take radical measures such as forcing Tamil civilians to leave Colombo, which, in one way or another, helps shore up the LTTE support base in the Tamil community, a base that has been shrinking over the years. Colombo, consequently, remains under, and deeply vulnerable to, imminent and intense threat of terrorist attack.