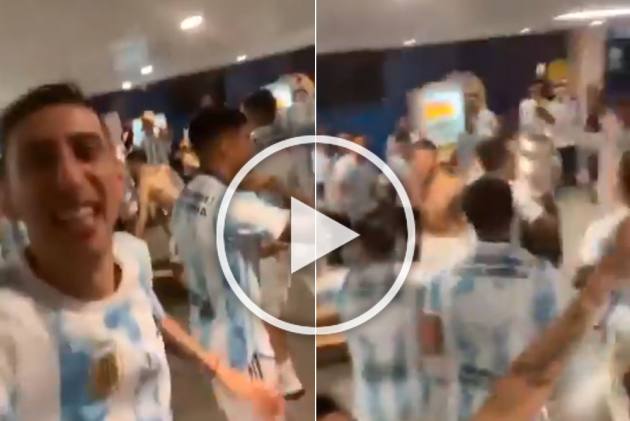 It doesn't mean much. But it will anger legions of Brazil supporters. This is the song made famous by Argentina supporters during the 2014 World Cup in Brazil. Argentina came close to becoming the world champions, only to lose after extra time to Germany. But that was many moons ago. (More Football News)

Now, in a world ravaged by the coronavirus pandemic, fans hardly get to attend matches at venues, leaving such boisterous songs at the mercy of whimsical few. But on Saturday at Rio de Janeiro, Argentina players made sure they ask "tell me how it feels" again.

Angel Di Maria, who shared the clip, had scored the all-important goal as Argentina won their first major title since 1993 with a 1-0 win over bitter rivals Brazil in the final of Copa America 2021.

And Lionel Messi finally lifted his first major trophy for the national team, filling in one of the biggest gaps in his decorated career.

By the way, the song says "Brazil, tell me how it feels to have your Daddy in your house? I swear that even as the years pass, we will never forget How Diego [Maradona] outplayed you; How [Claudio] Cani[ggia] surprised you; You've been crying since Italy [1990] until today. You're going to see Messi, he'll bring us back the Cup. Maradona is greater than Pele...