The incident in Quetta, a city affected by relatively few sectarian killings, suggests an extension of the sectarian strife in Pakistan. 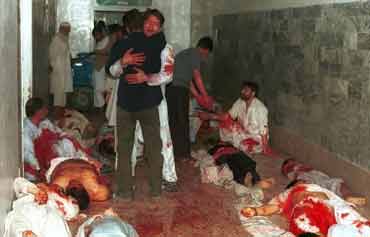 Even as President Pervez Musharraf was addressing a news conference in Paris to round off his 18-day trip to the United States and Europe, at least 53 persons were killed and 57 others injured when three armed terrorists, including a suspected suicide bomber, attacked a Shiite Muslim mosque in Quetta, capital of the Southwestern Baluchistan province, during the Friday prayers on July 4, 2003.

Hundreds of worshippers were praying at the mosque, the Jama Masjid-o-Imambargah Kalaan Isna Ashri, when the terrorists opened indiscriminate fire with automatic weapons and set off explosive devices. The Head of the Federal Interior Ministry's National Crisis Management Cell, Brigadier Javed Cheema, said that at least one of the assailants appeared to be a suicide bomber as he had grenades tied to his body and was blown up.

The massacre, the first sectarian attack in Quetta in which a suicide bomber was used, appeared to be an effort to ignite a cycle of violence between Sunnis and Shias (Sunnis constitute 77 percent of Pakistan's population and Shiites 20 percent) and destabilize the country, said officials. Pakistan has witnessed a long history of violence between the Sunni and Shiite sects, most of which has been perpetrated by groups that emerged in the 1980s during General Zia-ul-Haq's rule. Between 1989 and 2003 (till July 6), 1,468 persons have been killed and 3,370 others injured in some 1,813 sectarian incidents in Pakistan (Source: Institute for Conflict Management Database).

While no group has claimed responsibility for the latest massacre, members of the Shia community have predictably blamed 'Sunni extremists'. Large numbers of Shias have protested on the streets after the killings, attacking government property and setting ablaze vehicles. Curfew has been proclaimed with troops patrolling the streets of Quetta and other cities in an effort to prevent any retaliatory attacks. The latest attack unambiguously suggests that Islamist sectarian extremists, many of who went underground after a prolonged crackdown during which several top leaders were arrested or killed in 2002, are resurfacing, despite official efforts at containment.

President Musharraf, on his return to Islamabad, condemned the attacks, declaring: "Whether they are religious extremists or sectarian extremists they are ignorant and wild." The incident comes in the wake of increasing Islamist fundamentalist / extremist opposition to his regime's current engagement with the United States. Islamists may have intended to send a message regarding their uneasiness with Musharraf's current agenda.

Such incidents also indicate that the jehadis retain substantial striking capacities, negating Musharraf's 'feel-good message' in USA that the Al Qaeda and its affiliates were on the run. While the immediate provocation for the massacre is still unclear, Federal Information Minister Sheikh Rasheed Ahmed said that sectarian terrorists could have been retaliating against recent arrests: "In Punjab and in Sindh there was a crackdown… Day before yesterday [July 2], their important people were all arrested".

The incident in Quetta, a city affected by relatively few sectarian killings, suggests an extension of the sectarian strife in Pakistan. The Punjab province and Pakistan's commercial capital, Karachi, in the Sindh province, have been the primary hubs of sectarian violence over the past two decades. However, the two major attacks, including the latest one, during year 2003 have occurred in Quetta.

On June 8, 2003, 13 trainee police personnel belonging to the local Hazara community of the Shia sect were killed and eight others injured at Sariab Road in Quetta. There is also a tribal dimension to the Quetta attacks. A majority of the Shia victims are Hazaras, hailing from Afghanistan but who have been living in Quetta for generations. However, officials in the area have said that the Afghan origin of the Hazaras is only a coincidence. Quetta, which lies close to the border with Afghanistan's Kandahar province, has been a hotbed of Islamist extremist activities for years.

In sharp contrast to his ambivalence to Islamist terrorist activities elsewhere, President Musharraf's intent has been unambiguous as far as domestic sectarian terrorism is concerned. His 'war against terror' has vigorously targeted sectarian terrorist groups, and has had substantial impact domestically.

Year 2002 witnessed a marked decrease in the fatality index of sectarian violence with 121 persons killed and 257 others injured in 63 incidents, as compared to 261 persons killed and 495 others injured in 154 incidents during the year 2001. Among the major incidents of sectarian violence in 2002 was the February 26 attack at the Shah Najaf Mosque in Rawalpindi in which 11 persons were killed and over 19 others injured when three terrorists opened fire on a group of approximately 40 worshippers. In another major attack, seven women and five children were killed while 25 others were injured in a bomb explosion in the women's section of a Shia religious ceremony at Bhakkar in Lahore on April 25.

The relative reduction in casualties in sectarian violence is primarily traced to the fact that Lashkar-e-Jhangvi (LeJ), the main Sunni group, was vigorously targeted by state agencies following its January-12, 2002, proscription. A significant number of its cadres, including the top leadership, were either arrested or killed during various encounters. Approximately 26 LeJ cadres, including many top leaders, were killed and 32 of them arrested during year 2002.

Those killed included Riaz Basra and Asif Ramzi, two top LeJ leaders. Basra, Pakistan's most wanted sectarian terrorist, was killed along with three of his accomplices during an encounter in Mailsi on May 14, 2002. He is reported to have established a training camp at Sarobi near Kabul in Afghanistan where recruits from Pakistan were trained in the use of firearms and explosives for carrying out sectarian attacks in Pakistan and against the Taliban's Afghan opposition (the erstwhile Northern Alliance).

Asif Ramzi, a most-wanted LeJ terrorist and a proclaimed offender for over 12 years, was a key link between local Islamist terrorists, and the Taliban and Al Qaeda. He was wanted for involvement in more than 87 cases of murder, attacks on embassies and other terrorist acts, and had a price of Rupees three million on his head. US Federal Bureau of Investigation (FBI) officials suspected that Ramzi manufactured the bombs used in the May 8, 2002, blast outside the Sheraton Hotel. He was among the seven persons killed in the December 19-explosion at a chemical warehouse in the Korangi area of Karachi.

Akram Lahori, another front ranking LeJ terrorist involved in 38 cases of sectarian killings in Sindh, was arrested in Karachi on June 17, 2002. After Riaz Basra's death, Lahori was acting as the LeJ chief and he had himself monitored and taken part in sectarian killings in Karachi, where he was residing for the preceding one and a half years. Lahori, arrested along with five accomplices from Orangi Town in Karachi, reportedly confessed that dozens of the group's activists had been prepared for suicide missions under the guidance of top Al Qaeda leaders holed up in different parts of the country. In the continuing crackdown, on May 29, 2003, Qari Abdul Hayee, the succeeding acting LeJ chief, was arrested during a surprise raid conducted in the Muzaffargarh district.

Despite these various reversals, however, the group appears to have retained a substantial capacity to strike, and it has emerged as a key provider of logistical support and personnel to the remnants of the Al Qaeda and Taliban currently present in Pakistan. Indeed, many LeJ cadres are reported to have joined various front outfits of the Al Qaeda that emerged in the aftermath of the January 12-proscription. The LeJ was also said to be involved in a majority of the attacks on Christians and Western targets in Pakistan during 2002.

Among the others, the Sipah-e-Sahaba Pakistan (SSP), a Sunni group, and the Tehreek-e-Jaferia Pakistan (TJP), a Shia extremist group, lay low temporarily in the aftermath of their proscription. They did not, however, alter their organizational structure and, though their cadres went underground for some time, openly resumed their political activities after a brief hibernation.

The SSP even re-commenced publishing its official organ, the monthly Khilafat-i-Rashida, which it had discontinued immediately after its proscription. It also ran a highly effective electoral campaign for its candidate, Maulana Azam Tariq, who won a parliamentary seat from the Jhang constituency in Punjab province in the October 2002 General Elections. Similarly, while retaining its existing organizational infrastructure, the TJP joined the Muttahida Majlis-e-Amal (MMA) under a different name - the Tehrik Millat-i-Islami Pakistan. The central command of this group also formed new groups to function as front outfits. TJP office-bearers were reportedly accommodated in the new Azadari Council and Haideri Foundation.

At the other end, the Tehreek-e-Nafaz-e-Shariat-e-Mohammadi (TNSM), a militant Wahabi tribal group which operates primarily in the tribal belt, such as in Swat and the adjoining districts of the NWFP, has, according to recent reports, suffered the most in the countrywide crackdown on Islamist extremist organizations with a domestic agenda and activities. A large number of its cadres were arrested in Afghanistan after the fall of the Taliban, while those who managed to escape were subsequently arrested on their return to Pakistan. Under alleged US pressure, Pakistan's military regime could not show any leniency towards the TNSM, as its cadres had more directly challenged the American forces in support of the Taliban in Afghanistan. The Sipah-e-Mohammad Pakistan (SMP), the main Shia group responsible for sectarian violence in the past, remained dormant through 2002 and the first half of year 2003.

While President Musharraf has acted stringently in dealing with domestic terrorism emanating from sectarian groups, the prevailing law and order situation in the country demonstrates that terrorism is not an affliction that can be dealt with in a piecemeal fashion - encouraged and supported in one direction, and suppressed in another. The crackdown targeting sectarian groups, it appears, is failing to produce the desired impact, and incidents like the latest massacre in Quetta suggest that the underground networks and support structures of sectarian groups, particularly that of the Lashkar-e-Jhangvi, remain unimpaired, and may, indeed, have achieved greater complexity and resilience through their linkages with other terrorist organizations. Clearly, a more comprehensive strategy is required to destroy the source of their lethality.

An Indian Student In Pakistan