Thailand’s raging floods, as so many extreme weather events elsewhere in the world, once again reiterate the emerging non-traditional threats to a nation’s economic security. 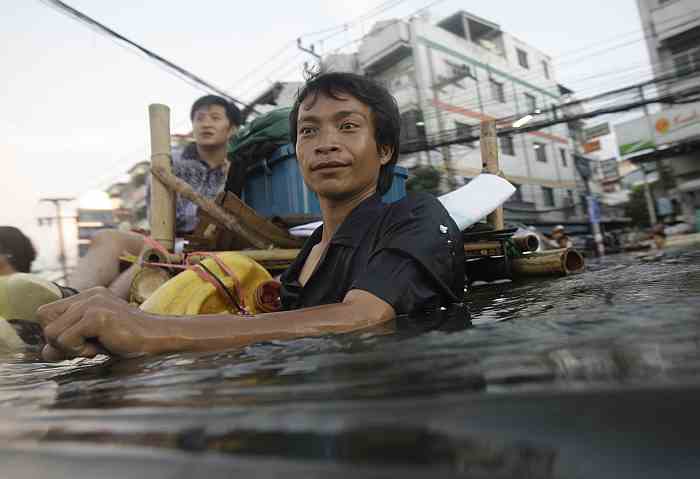 Thailand is facing the most devastating flooding in its history with incalculable loss of life and property. Thanks to the country’s role in global commerce and industry, the impact will be felt in food stores and auto sales rooms far and away. The floods also put a spotlight on Thailand’s poor management while the authorities desperately try to save the capital, Bangkok.

The country of 67 million plays a fundamental role in the global supply chain. It has long served as the world’s manufacturing hub for many products, from textiles to auto assembly and electronics. The flooding will certainly cost hundreds of millions in lost revenue for companies dependent on factories and supplies located in Thailand. Exports of goods and services accounted for nearly 70 percent of Thailand’s GDP in 2010.

The Thai government reports that at least 342 people have died in the floods since July. The monsoon rains hit hard since the beginning of the year, with flooding starting in the north, already deforested, and progressing southward, now affecting more than two thirds of the nation. Some towns have been submerged under more than six feet of water, and continuing uncertainty about rising waters in the capital may persist for another six weeks. Half a million Thais are now living in temporary shelters. Rail services and some major highways, have also been disrupted.

The floods have triggered widespread alarm and food shortages. More than 10 percent of the nation’s rice fields have been inundated, and a food-induced panic has pushed many Thais to stockpile rice. Meanwhile, Thailand’s Labour Ministry stated that the flooding has affected 14,818 workplaces and 678,227 workers. Economic analysts said that the floods, the worst in half a century, have cut Thailand’s 2011 GDP projections by as much as 2 percentage points. The latest damage estimate of $6 billion could double if floods ultimately swamp Bangkok.

Local supply chains have been broken and factories forced to close. The country’s automotive industry is among the hardest hit, and disruptions will ripple worldwide in the short term. Toyota, Honda, Nissan and Ford are all experiencing disruptions in production. Toyota, the largest vehicle manufacturer operating in Thailand which produced 630,712 units last year at three facilities in the country, has announced a suspension in assembly operations until at least the end of October. Although the automaker’s manufacturing facilities are not affected directly by the flooding and reportedly the automaker has inventory to sustain sales for a month, supplies of hundreds of parts from the flooded areas to other plants are disrupted.

Apple, Sony, Canon and Toshiba have also closed their facilities in Ayutthaya, one of the worst-hit parts of Thailand. Apple Chief Executive Officer Tim Cook admitted last week that the floods set back the supply of components used in Mac computers. Meanwhile, Seagate Technology said its production of hard drives would be affected in the current quarter because of supply-chain disruptions. Thailand is the world’s largest producer of hard-disk drives, and Western Digital CEO John Coyne recently warned that the company expected significant impacts on its hard-drive manufacturing operations in Thailand. A Seagate statement noted: “Given the severity of the situation and the extensive supply constraints caused by the disruption … the effects on our industry are likely to be substantial and will extend over multiple quarters.”

As for the food industry, Thailand is known as “kitchen of the world.” Charoen Pokphand Foods Pcl, Thailand’s largest producer and exporter of meat and animal feed, has admitted that meat prices will climb. Flooding has caused substantial damage to chicken and pig farms, and falling supplies will boost meat prices. While this might bolster Charoen Pokphand’s revenues, the world’s consumers will have to pay more for their products.

Flooded areas of the country cover 12.5 percent of total land under cultivation, threatening the agricultural sector. Thailand is a major agricultural exporter and has been the world’s top rice exporter for decades. “Although no precise crop damage estimates are yet available, the main rice season at the critical growth stage is likely to be affected the most,” said the UN’s Food and Agriculture Organization (FAO). The FAO said it expected damage estimates to rise as dams allow water run-off.

Rice is currently almost sold out in Bangkok, although Thailand has no shortage since 4 million tons of rice remain in stock at state-run enterprises, and nearly 1 million tons are in government warehouses. Thailand had until recently exported 9.4 million tons of rice, up 45.16 percent over last year. But the raging floods will hit export markets. Countries importing rice from Thailand are expected to pay higher prices next year.

As Bloomberg reported, rough-rice for January delivery rose 0.5 percent to close at $16.715 per 100 pounds on the Chicago Board of Trade on October 21. The export price for the 100 percent grade B Thai white rice, the benchmark in Asia, gained 1 percent to $625 per metric ton on October 19, taking gains this year to 13 percent.

In the tourism sector, a number of countries have issued travel warnings for those who wish to visit Thailand at this time, including Japan and the United States, among the top 10 nations sending visitors. With 21 countries issuing travel warnings to their nationals, the Thai Foreign Ministry has instructed its overseas missions to assure accurate information.

Any discussion about natural disaster these days is no longer limited to economic and security implications. Environmental and water management policies, in this context, weigh just as heavily.

In the Thai case, it has taken the government almost three months to recognize that the flooding is at a critical level, suggesting that the Yingluck Shinawatra administration, in office since August, did not consider natural disasters a priority. In reality, the administration inherited a persistent lack of effective disaster-management systems. Prime Minister Yingluck has also been criticized for a lack of leadership. Only last week, she set up a “war room” to tackle the problem.

Ministers directly in charge of the disaster, including the minister of natural resources and environment, resisted declaring disaster early on. Once coerced into taking responsibility by the media and foreign investors, they came up with conflicting suggestions on the right timing to open main floodgates to save Bangkok, further confusing flood victims. The new administration offered no integrated approach or policy at the national level.

With more rains expected, many Thai are asking tough questions: Why did the Royal Irrigation Department keep huge reserves of water in key dams at the beginning of the monsoon season? Why did the previous governments, which also saw threatening floods, not put an effective flood-management system into place?

Thailand’s raging floods, as so many extreme weather events elsewhere in the world, once again reiterate the emerging non-traditional threats to a nation’s economic security. Governments and multinational corporations should no longer be caught off guard by flooding and other climate disasters. The impacts are now transnational. Failure to anticipate and ameliorate the consequences will surely lead to deteriorating relations with other countries, be it through trade or other connections.

Pavin Chachavalpongpun is a fellow at Singapore’s Institute of Southeast Asian Studies. Follow him on Facebook. Rights:Copyright © 2011 Yale Center for the Study of Globalization. YaleGlobal Online

The Net Of Freedom